Letter to the President from Mr. Kais Menoufy

By: Latest Press Releases from Newswire.com
To the President of the United States, Donald J. Trump 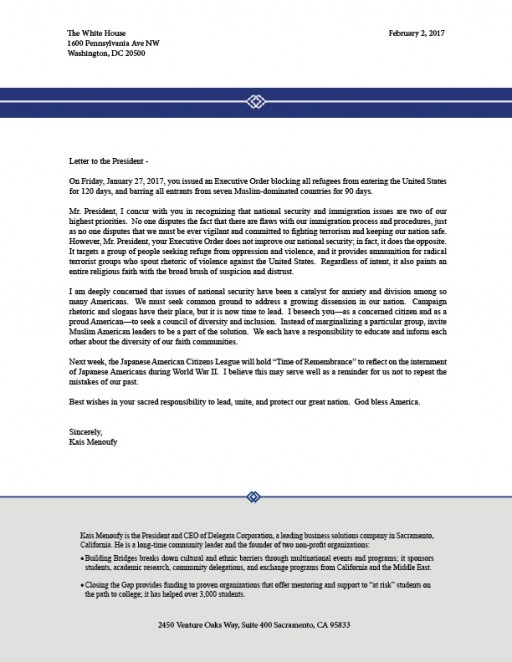 ​​​The following open letter to President Donald J. Trump is being issued by Mr. Kais Menoufy.​

Letter to the President -

On Friday, January 27, 2017, you issued an Executive Order blocking all refugees from entering the United States for 120 days, and barring all entrants from seven Muslim-dominated countries for 90 days.

Mr. President, I concur with you in recognizing that national security and immigration issues are two of our highest priorities.  No one disputes the fact that there are flaws with our immigration process and procedures, just as no one disputes that we must be ever vigilant and committed to fighting terrorism and keeping our nation safe.  However, Mr. President, your Executive Order does not improve our national security; in fact, it does the opposite.  It targets a group of people seeking refuge from oppression and violence, and it provides ammunition for radical terrorist groups who spout rhetoric of violence against the United States.  Regardless of intent, it also paints an entire religious faith with the broad brush of suspicion and distrust.

I am deeply concerned that issues of national security have been a catalyst for anxiety and division among so many Americans.  We must seek common ground to address a growing dissension in our nation.  Campaign rhetoric and slogans have their place, but it is now time to lead.  I beseech you — as a concerned citizen and as a proud American — to seek a council of diversity and inclusion.  Instead of marginalizing a particular group, invite Muslim American leaders to be a part of the solution.  We each have a responsibility to educate and inform each other about the diversity of our faith communities.

Next week, the Japanese American Citizens League will hold “Time of Remembrance” to reflect on the internment of Japanese Americans during World War II.  I believe this may serve well as a reminder for us not to repeat the mistakes of our past.

Kais Menoufy is the President and CEO of Delegata Corporation, a leading business solutions company in Sacramento, California. He is a long-time community leader and the founder of two non-profit organizations:

- Building Bridges breaks down cultural and ethnic barriers through multinational events and programs; it sponsors students, academic research, community delegations, and exchange programs from California and the Middle East.

- Closing the Gap provides funding to proven organizations that offer mentoring and support to “at risk” students on the path to college; it has helped over 3,000 students.

Original Source: Letter to the President from Mr. Kais Menoufy