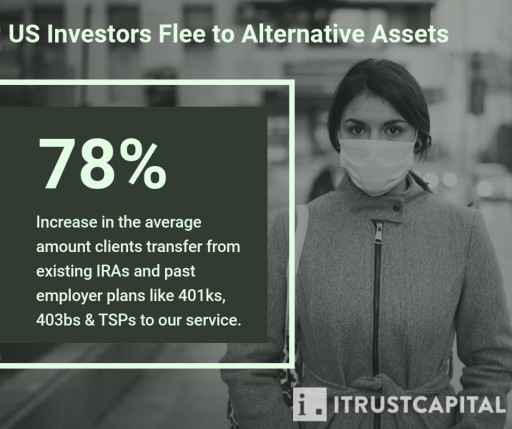 ​IRA investment platform iTrustCapital reports a 78% increase in the average starting account size of new clients who transfer funds from existing IRAs and past employer plans like 401ks, 403bs and TSPs. "From January 1 to March 15, the average was $27,000. Over the last three weeks, it surged to $48,000," says Todd Southwick, CEO.

"The outflows from traditional investments like stocks and mutual funds are at historic levels. Investors are looking at ways to diversify," Todd continues: "The iTrust platform happens to offer what many believe are such assets. We see inflows to our most popular assets, XRP, Bitcoin, and other top market cap cryptocurrencies. Also, with our imminent release of the most advanced and cost-effective way to invest in physical gold in an IRA, our clients are NOT taking a wait-and-see-what-happens approach, they are taking action now."

"We are also starting to see the impact of recent layoffs, as the percentage of rollovers from past employee plans is spiking as new clients now have the ability to rollover their retirement plans into an IRA. Unfortunately, based on our modeling, we expect this trend to continue for quite some time due to the economic downturn."

According to Tim Shaler, iTrustCapital's Economist in Residence, this trend mirrors what we've been observing in changes in consumer sentiment. iTrustCapital conducted four surveys from late February through March, asking respondents what assets would be best in a global pandemic. "Our two takeaways are 1. investors distrust the stock market and increasingly prefer cash (as opposed to treasury bonds), and 2. strong favoritism towards alternatives like gold and cryptocurrencies."

Respondents consistently chose gold as their favored investment, with an average of 32% -- essentially unchanged for the four weeks. "A surprisingly large number of people choose cryptocurrency; over 9% of participants," says Tim. He points to some of his recent commentary in FxStreet. "We have a working hypothesis that Bitcoin and other digital currencies do still have as their primary use-case the preservation of wealth. However, we believe the dominant users of digital currencies as a store of wealth are now in countries with tight capital controls such as China, Iran, and Venezuela."

iTrust Capital's COO, Blake Skadron, adds: "The Fed dropping helicopter money at a rate we've never seen before will only fuel the fire for a financial revolution that many believe will result in a complete monetary reset. Our clients are positioning themselves to come out the winners on the other side."

Skadron continues, "I remind people to look at what the government and Fed are doing, not what they are saying. The kitchen sink has already been thrown, interest rates dropped to zero, trillions of dollars in stimulus approved, putting money directly in the hands of citizens, and we are still in the early stages of this disaster. The monopoly money hasn't even landed, and Washington is already working on the next round of stimulus. You can't print your way to prosperity."

"The pressure on world currency markets is unprecedented. Our platform helps investors diversify their wealth into assets where they own direct title and have the option to take delivery. Americans have over 30% of their wealth in retirement accounts. Our platform not only provides diversification in assets but also from Wall Street Firms and World Banks," says Todd Southwick, CEO.

iTrustCapital is a low-cost investment platform that lets clients buy and sell cryptocurrencies and physical gold in retirement accounts.