42% of Ransomware Attacks in 2020 Occurred in the Battleground States of the Upcoming U.S. Presidential Elections, New Study by MINDSMITH

By: Latest Press Releases from Newswire.com
MINDSMITH report reveals that local governments of the swing states were the most vulnerable to ransomware attacks in 2020 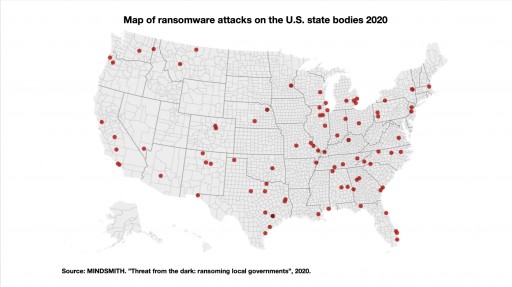 MINDSMITH, a tech think tank specializing in cybersecurity and high technologies consulting, education and research, conducted a study on the ransomware landscape in U.S. state bodies in 2020.

Since the beginning of 2020, U.S. state bodies at various levels have been attacked by ransomware at least 93 times in 68% of states. Nevertheless, it was found that 42% of attacks occurred in the battleground states of the upcoming U.S. presidential elections.

With the spread of the coronavirus, many other important viruses began to fade into the background. However, there is no panacea for ransomware. Prevention requires hard work building new tools, new policies, and new methods of network security. This study analyzed the publicly available information on ransomware attacks on U.S. state bodies in 2020 and identified the most exposed regions of the country. Thus, in-depth analysis has shown that the majority of ransomware attacks (38%) targeted local authorities and city governments. And by the industrial segregation, 18% of ransomware attacks paralyzed the work of local school districts.

Other findings discovered by the research include:

MINDSMITH consists of a seasoned multidisciplinary team of analysts and consultants in the field of innovations and IT. Core expertise — digital transformation, cross-cutting technologies, new business models, investments, tech trends.

Original Source: 42% of Ransomware Attacks in 2020 Occurred in the Battleground States of the Upcoming U.S. Presidential Elections, New Study by MINDSMITH