Looking For The Best Tech Stocks To Buy This Month? 3 Names To Watch

By: Stockmarket.com
Are These The Best Tech Stocks To Buy In Q1 2021?

Year after year, tech stocks continue to outperform the broader market. In the past year, the Nasdaq Composite has been up by 90% since March and shows no signs of stopping. This is likely due to the surging demand for these tech services as the world continues to adopt the latest technology we have today at unprecedented speeds. Today, we see that a pandemic and global uncertainty still plagues the world. Investors however have been flocking to top tech stocks as the go-to stocks in search of high returns.

Who would stand to gain as a new year begins and tech companies continue to innovate? With the Consumer Electronics Show happening this week, we certainly get to see the best that tech has to offer. Advanced Micro Devices (NASDAQ: AMD) has just announced its latest generation chipsets for laptops and expects over 150 new laptops with its chipsets to hit the market in 2021. Tech company Waymo, a subsidiary of Google (NASDAQ: GOOGL), has also announced its fifth-generation self-driving technology, Waymo Driver. Waymo Driver is designed to improve safety and provide new mobility solutions. From these examples, you see how tech affects many aspects of our lives.

It is safe to say that the tech industry is still booming. This is despite how the pandemic has desecrated many other key industries such as retail and energy. With talks of a $1.5 trillion stimulus bill along the way and with Joe Biden set to be inaugurated as President of the United States next week, we could soon see another rally in the best tech stocks to watch. With that in mind, is this list of top tech stocks worth adding to your portfolio?

Intel is a tech company that is based in California. It is the world’s largest and highest valued semiconductor chip manufacturer based on revenue. The company supplies its microprocessors for computer system manufacturers such as HP (NYSE: HPQ) and Dell (NYSE: DELL). Intel’s share price shot up by over 11% yesterday on news that Pat Gelsinger will now become the company’s new CEO. Gelsinger is a respected CEO and industry veteran, with more than 4 decades of technology and leadership experience. He has also spent 30 years at Intel where he began his career.

Could things finally take a turn for the company that has been struggling to keep up with its competitors like AMD and Taiwan Semiconductor Manufacturing (NYSE: TSM) in the last few years? In the company’s latest quarter financials posted in October, Intel reported total revenue of $18.3 billion for the quarter, representing a 4% decrease year-over-year. The decrease in revenue is due to pandemic-related impacts in significant portions of its business. The company will announce its fourth-quarter results next week. 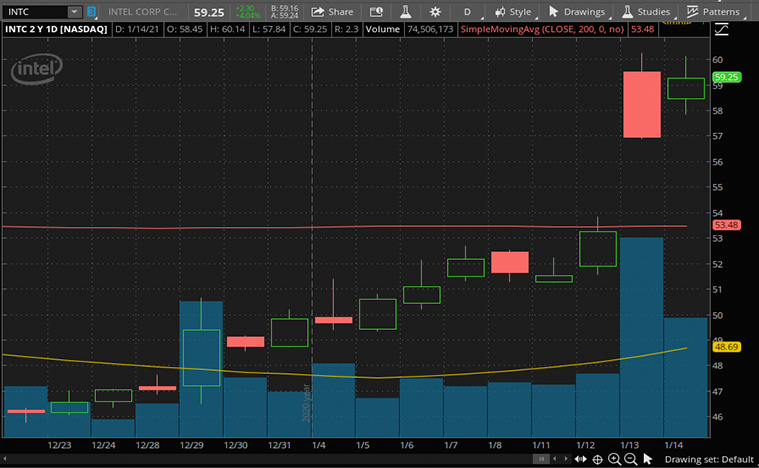 At CES this week, Intel highlighted how it is driving technology leadership with the introduction of more than 50 processors, which will result in more than 500 new designs for laptops and desktops in 2021. The company also recently launched its 11th Gen Intel Core vPro platform, an unrivaled business platform to deliver the industry’s highest performance and the world’s most comprehensive hardware-based security. These are game-changing plays for the company and would position the company for growth in the long run. With all things considered, will you have INTC stock as a top tech stock to buy?

Future is a leading blockchain technology and application company. The company is the brains behind a blockchain-based online shopping mall platform called Chain Cloud Mall (CCM) and a digital payment system called DCON. The company’s shares are up by over 300% year-to-date.

The company has been busy with a plethora of tech-related offerings recently. Future is currently developing an anti-counterfeiting and tracing system with its blockchain technology. For the uninitiated, blockchain technology is a structure that stores transactional records of the public in databases that can be viewed but not edited.  The company also has a cross-border e-commerce platform as well as an incubator for blockchain-based application projects. Future has also been in the limelight as it announced that its blockchain patents have been approved in China. The company also announced that its subsidiary had completed building software that allows e-commerce sites to accept bitcoin as a payment option. 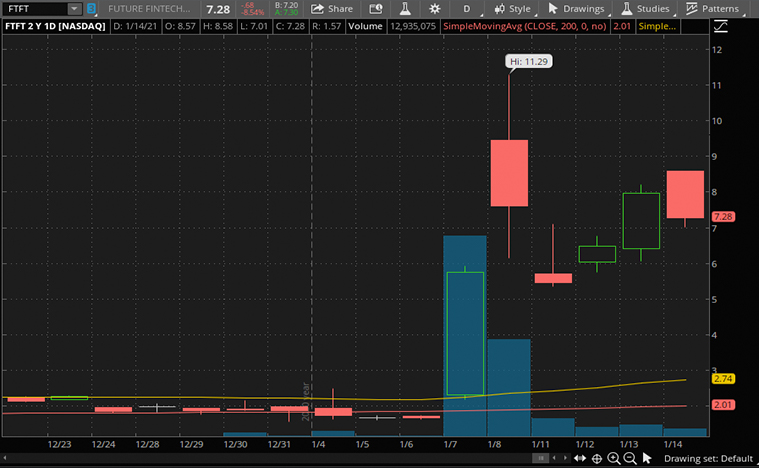 Blockchain technology has gained widespread popularity in recent years. With Future, the possibilities are endless. Zhi Yan, General Manager of CCM had this to say, “Anti-counterfeiting and rewarding systems in e-commerce is only the first application of this technology. Our supply chain system, contract farming system, and order management system may also use this technology. Our application of software copyrights will protect our intellectual property rights and help us further improve the blockchain-based system of CCM.” With such exciting developments surrounding the company, will you buy FTFT stock?

[Read More] Making A List Of The Best Stay-At-Home Stocks In January? 2 Up 25%+ This Week

Marvell is a tech company that provides data infrastructure technology and semiconductors solutions. The company has over 25 years of experience in the enterprise, cloud, automotive, and carrier industries. Marvell has been expanding its portfolio over the last few years in preparation for the 5G era. The company’s share price has been up by over 10% in the last month.

How has the company been doing financially? In its latest third-quarter fiscal posted last month, the company reported a revenue of $750 million, a 13% increase year-over-year. This revenue increase is driven by its networking business, which grew by 35% compared to a year earlier. Marvell attributes strong 5G and Cloud product ramps that are fuelling its ongoing success as it carries on in these strategic growth markets. The company also continues to see demand for its infrastructure and services. 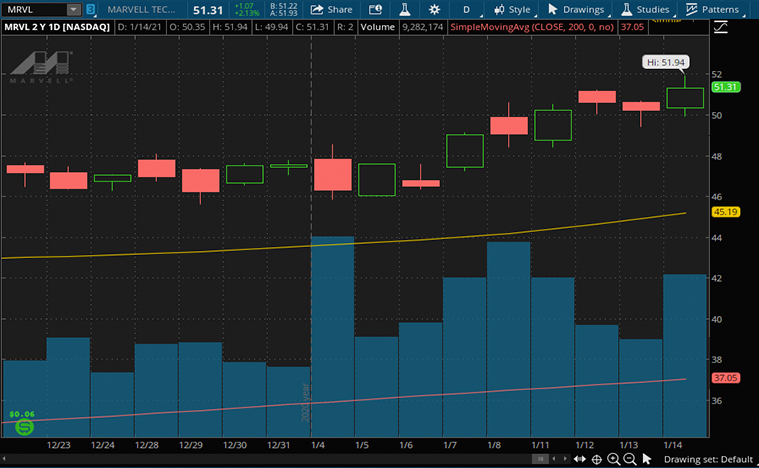 The company became part of the NASDAQ-100 Index last month. This is indeed a testament to Marvell’s strength and future growth opportunities. The company launched an end-to-end 5G platform at the beginning of 2019 to speed up its deployment of 5G infrastructure. Companies like Samsung (OTC: SSNLF) and Nokia (NYSE: NOK) have been utilizing Marvell’s processors to power their 5G solutions. With two major telecommunications manufacturers behind Marvell, things certainly look promising for the company. Will that be enough for you to buy MRVL stock?