By: AB Newswire
Miners Zone is the next big thing on the Binance blockchain for the users, and it could be the next Bombcrypto with several key advantages over its competitor.

Players form a "Team of Miners" to mine and earn rewards in Miners Zone, an idle PVE-style play-to-earn game. Miners Zone allows players to digitally own NFT game assets that are in high demand in the market.

Thousands of players from all over the world will play the game in the hopes of making money by "playing to earn." The game will strike a delicate balance of engaging fun with the "play to earn" element that this generation of gamers craves.

Miners Zone has many advantages over its competitors like Bombcrypto.

Some of the advantages that users of Miners Zone can get are:

- It is more transparent. Mistakes done by other projects have been checked so that they can be avoided in Miners Zone.

- Miners Zone will be completely decentralized from the day it is introduced.

- It has a bigger rewards pool. It is seven times bigger when compared to Bombcrypto.

- In the Miners Zone, 100 miners can be charged simultaneously.

- It has a better GUI when compared to other games in a similar space.

No wonder crypto enthusiasts are considering Miners Zone as the next Bombcrypto but with better features. The Project’s smart contract is audited and its team is also KYCed.

MinersZone has started ILO on Unicrypt, and whitelisting is available on their telegram channel https://t.me/MinersZone_p2e.

In Miners Zone, an idle PVE-style play-to-earn game, players form a "Team of Miners" to mine and earn rewards. Players can digitally own NFT game assets in Miners Zone, which are in high demand in the market. Thousands of players from around the world will participate in the game in the hopes of getting "playing to earn" money. 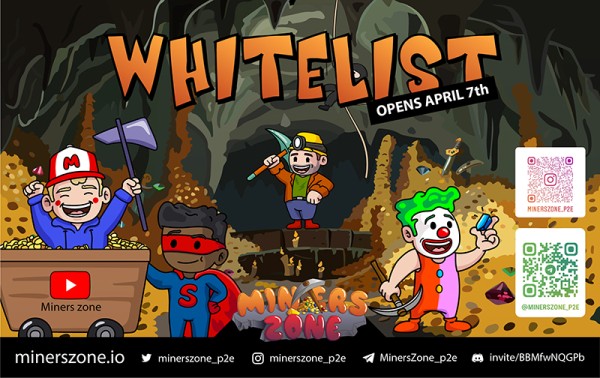