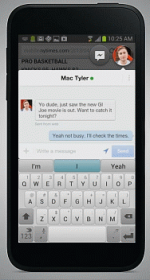 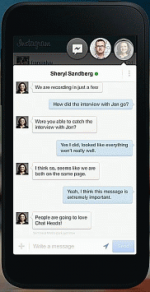 Single-tasking has been a hallmark of mobile. But Facebook Home lets you chat in an overlaid drop-down window as you use Google, Yelp, Maps or any other app, bringing the productivity of the desktop to the small screen. Home's cover feed and responsive design are nice, but you could call them mediocre. Chat multi-tasking, though, merges the communication and computing sides of the smartphone.

Single-tasking has been a hallmark of mobile. But Facebook Home lets you chat in an overlaid drop-down window as you use Google, Yelp, Maps or any other app, bringing the productivity of the desktop to the small screen. Home’s cover feed and responsive design are nice, but you could call them mediocre. Chat multi-tasking, though, merges the communication and computing sides of the smartphone.

Innovation doesn’t need to hit you over the head. It just has to solve a problem in a new way. Until now, a real hinderance to text messaging on mobile was context switching. You were either communicating with someone, or you were in another app. ‘Or’. Not ‘And’. What Android and iOS call “multi-tasking” is really just more rapid switching. Even with pop-over notifications, you still had to leave one app and open another to respond. That moment you see your current activity fade to black and a messaging app ascend to replace it causes a mental break.

This context switching is unnatural and unhelpful. Often we are communicating about what we’re computing — giving someone the answer to a question, making a joint decision, guiding someone to a destination, or discussing a piece of content found online. I’ve definitely had to go back and forth multiple times in frustration between SMS or Facebook Messenger and other apps when I couldn’t remember a set of directions or other complicated string of information I was trying to pass to a friend. The best option was to carry on a voice call over speakerphone as you navigate around the phone, and some connection types don’t even support this.

Our desire to converse as we cruise around the digital world stems from pre-mobile behavior patterns. Humans have always been able to talk while doing something else at the same time. Since the days of IRC and (TechCrunch parent company) AOL’s Instant Messenger, you could browse the web or use other apps with a chat window floating on top. We were led to believe there simply wasn’t enough space on our little mobile screens to do this. Maybe on big phablets like the Galaxy Note II or full-size tablets like the iPad, but not a traditional-sized smartphone screen.

Facebook’s designers weren’t satisfied with that. They are obsessed with modeling mobile after how we conduct our lives in person. That’s why they built “read receipts” into Messenger a year ago. They mimic the body language cues that tell us someone heard what we said At the time, I asked Facebook Director Of Product Peter Deng who oversees messaging about the philosophy behind alerting people when their messages are read by their recipients. He told me:

“Technology has always been here to assist us, not to get in our way, not to make us think too much. We’re building technologies that are modeled after real life conversations. We start with people and how we’ve been wired for thousands of years to behave. ‘How do you get things closer to face-to-face?’ Everything we do is built on this social principle. What we’re doing today is just the start.”

Chat multi-tasking in Home is the next step he was alluding to. When someone messages you, a little bubble with their face pops up over the top of whatever app you’re using. A preview of the first dozen characters of the message splays out sideways from their head. What’s special is that if you tap their face, rather than closing your current app and opening Facebook Messenger, the bubble scoots to the top of the screen and an overlaid message window drops down from it with part of your currently used app still visible. Tap their face again and the message window retracts, revealing what you were doing with no context lost.

This system brings us one step closer to bonafide simultaneous messaging and mobile activity. In my opinion, the only serious shortcoming is that you can’t park the overlaid chat window on part of the screen and scroll around the exposed background app behind it. There isn’t a ton of room for this on the HTC First screen and some standard Androids, but I still think it’d be useful. Luckily the trend is growing screen sizes, so we’ll likely have more space soon.

Everyone I showed the Facebook Home hands-on video to or described the homescreen replacement app to has fixated on chat multi-tasking, which Facebook has given the silly name of  ”Chat Heads”. When I showed the Home video to a group of three decidedly non-techie 27-year-old women in Washington, DC, it was Chat Heads that surprised and elated them. It was met with calls of “I want that” and even one “I want to buy that” in regards to the HTC First running Home.

The feature is a true game-changer because I believe we’ll see similar functionality emulated and improved upon in other apps and operating systems. I would be extremely surprised and disappointed if the next version of Apple’s iMessage didn’t have some kind of chat multi-tasking. The same goes for the Google’s rumored unified messaging system that’s supposed to launch at some point in the near future. Hopefully they’ll offer true, simultaneous messaging and other app usage.

Until then, Chat Heads could be the feature that convinces people to download Facebook Home or buy an HTC First. The messaging space has gotten extraordinarily hot these last few years as companies realize just how long we spend texting, and how much valuable data about who we care about comes with it. Instant, asynchronous mobile messaging brought us the ability to communicate as we go about our offline days. That’s why SMS got so popular. But as we increasingly live digitally within the infinite potential of our smartphones, we need messaging broken out of its silo.

Read more of our coverage and analysis of the Facebook Home Launch.

Related Stocks:
Data & News supplied by www.cloudquote.io
Stock quotes supplied by Barchart
Quotes delayed at least 20 minutes.
By accessing this page, you agree to the following
Privacy Policy and Terms and Conditions.