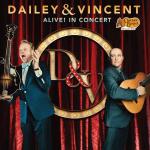 Cracker Barrel Old Country Store® and multi-GRAMMY Award nominated duo Dailey & Vincent announce the upcoming CD release of Dailey & Vincent - ALIVE! In Concert, which will be available April 27, exclusively at all 634 Cracker Barrel Old Country Store® locations and online at crackerbarrel.com. This is the first live album for the “Rockstars of Bluegrass,” who have released two previous albums through the Cracker Barrel exclusive music program. It will retail for $11.99.

Featuring 15 songs, Dailey & Vincent - ALIVE! In Concert was recorded live during a performance at the Hylton Performing Arts Center, located on the Prince William campus of George Mason University in Manassas, Virginia. The show celebrates the best of America, including its music, its men and women in uniform, and its soaring spirit.

In addition, the Dailey & Vincent - ALIVE! In Concert DVD will be available exclusively at all Cracker Barrel Old Country Store® locations and on Cracker Barrel’s website for a limited time beginning April 27, before being made available at other retail outlets. Along with the live performance, the DVD also features four documentaries about the duo offering almost two hours of bonus content. Viewers will also be treated to a rousing finale accompanied by a 50-person orchestra and 100-person chorale.

“We are so happy to be partnering with Cracker Barrel once again,” said Jamie Dailey and Darrin Vincent. "Our fans have been asking us for a live album and DVD for a long time. We are so excited to finally bring them this amazing album and DVD! This one is for our loyal fans, both old and new."

The live concert performance, which made its broadcast debut on presenting station Nashville Public Television (NPT) Dec. 17, 2014 and generated many contributions to the station, will be broadcast to over 62 percent of the country on public television stations nationwide over the next two years, thanks to the underwriting of Cracker Barrel Old Country Store and other sponsors.

“It is always exciting to have a new album from Dailey & Vincent to offer our guests,” said Cracker Barrel Marketing Manager Julie Craig. “Cracker Barrel believes in good quality family entertainment, and we are proud to help underwrite Dailey & Vincent’s television special for public broadcasting stations around the country.”

2014 was a record year for Dailey & Vincent with a GRAMMY nomination for Bluegrass Album of the Year, a first-time performance at Carnegie Hall in June, their Second Dailey & Vincent Festival in Denton, NC in September, and their very first headlining cruise (which sold out and set sail February 14, 2015).

Prior to forming the duo in 2007, both Jamie Dailey and Darrin Vincent were already seasoned veterans in the Bluegrass world, having garnered great personal success. A four-time IBMA Vocalist of the Year Award winner, Dailey sang and performed with groups such as Doyle Lawson & Quicksilver. Vincent has accumulated five GRAMMY Awards, has been voted Bluegrass Bass Player of the Year four years in a row (2009-20012), and is a former, ten-year band member for the GRAMMY Award-winning Ricky Skaggs and Kentucky Thunder. Both have performed alongside famous acts such as Dolly Parton, Vince Gill, Emmylou Harris and more. The duo performs over 120 shows per year with an 85% sell-out rate in the United States and presently resides at No. 34 on Pollstar’s “Concert Pulse.”

Dailey and Vincent will hold their 2016 WaterFest Cruise on Feb. 14-20, 2016. The cruise to the Western Caribbean will feature performances from Dailey & Vincent, Ricky Skaggs, Jimmy Fortune, and more. The first 200 passengers to register for the cruise will get a free one-day general admission pass to the Third Annual Dailey & Vincent LandFest (Sept. 17-19, 2015 in Denton, NC). For cruise tickets reservations, call (844) 233-3393. For more information on LandFest, including performers, ticket information, and more, visit daileyandvincent.com.

Cracker Barrel Old Country Store, Inc. provides a friendly home-away-from-home in its old country stores and restaurants. Guests are cared for like family while relaxing and enjoying real home-style food and shopping that’s surprisingly unique, genuinely fun and reminiscent of America’s country heritage…all at a fair price. The restaurant serves up delicious, home-style country food such as meatloaf and homemade chicken n’ dumplins as well as its made-from-scratch biscuits using an old family recipe. The authentic old country retail store is fun to shop and offers unique gifts and self-indulgences.