LEBANON, Tenn., Sept. 27, 2017 /PRNewswire/ -- Country music artist Chris Young has teamed up with Cracker Barrel Old Country Store® to produce a five-part docu-series, "Chris Young Losing Sleep Cracker Barrel Series," which is the first of its kind for the brand. The five-part docu-series features weekly episodes taking fans on a behind-the-scenes journey as Chris writes, records and performs his songs, and touches on how Cracker Barrel has continued to be his home-away-from-home along the journey. Fans can watch the series, which debuts Sept. 28 and runs weekly through Nov. 2, on Cracker Barrel's YouTube channel. 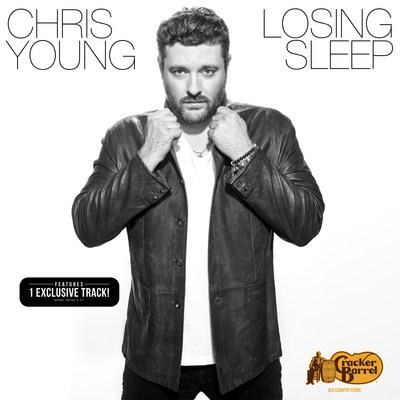 In addition to the docu-series, Young will exclusively release a deluxe version of his new album, "Losing Sleep," which features the bonus track "Encore," at all Cracker Barrel stores nationwide and online at shop.crackerbarrel.com on Oct. 20, 2017. Through this partnership, Young joins the ranks of iconic and up and coming artists that have become a part of Cracker Barrel's Spotlight Music Program over the years.

"Cracker Barrel understands that music is a powerful way to connect with people and so working with them was a natural fit for me," said Young. "I'm excited about this exclusive album, the video series, and the partnership."

"Losing Sleep" is Young's third studio album in less than two years and the first project where he has co-written every song. Young collaborated with a number of top songwriters for this album, including high-profile names Liz Rose and Jon Randall, while continuing to work with a core group of tunesmiths including Josh Hoge and Chris's co-producer, Corey Crowder. "Encore," the aptly titled exclusive track available only at Cracker Barrel, was co-written with Josh Hoge and Lindsay Rimes and takes fans on an exciting journey of falling in love.

Young, who is classically trained in multiple genres and has a love for all styles of music, steps outside the box for "Losing Sleep," as each song has a unique vibe, while maintaining his unmistakable country sound.

"Our Spotlight Music Program provides us an avenue to connect with our guests in a very unique way – through music and entertainment," said Cracker Barrel Senior Marketing Manager Julie Ulmer. "We look for partnerships that enable us to provide our guests something that they can't find elsewhere, whether that's exclusive access to artists or their music. Our project with Chris Young allows us to release not only an exclusive version of his new album that fans can only get from Cracker Barrel, but the ability to bring to life a docu-series that gives people a unique, one-of-kind look into his life on the road and the music he's creating. We've followed Chris' career for many years and are thrilled to work together on the release of 'Losing Sleep.'"

Cracker Barrel has released albums with a wide variety of artists, some of which have debuted in top spots on a range of Billboard charts. Recent Cracker Barrel Spotlight Music partners show the diverse range of genres and artists that partner with the brand, including Lady Antebellum, Anthony Hamilton, NEEDTOBREATHE, MercyMe and Reba McEntire. In February, Cracker Barrel's partnership with a cappella group Pentatonix and singer-songwriter legend Dolly Parton won the artists a Grammy Award for "Best Country Duo/Group Performance" for their unique remix of Parton's 1970s hit "Jolene."

About Chris Young
Recently invited to become the newest member of the Grand Ole Opry, Chris Young has earned multiple ACM, BBMA, CMA, CMT, Grammy and RDMA nominations and scored three consecutive chart-topping singles – including his ninth No. 1 "Sober Saturday Night" with Vince Gill – from his "excellent" (New York Times) album "I'm Comin' Over" (2015). He continues to set the bar even higher with the release of his brand new single, "Losing Sleep," which amassed more than 1.25 million on-demand streams in its first week of release. With six albums to his credit, including 2016's "It Must Be Christmas" and 2015's Gold-certified studio album, "I'm Comin' Over," which debuted at No. 1 on Billboard's Top Country Albums Chart, Chris continues to reach new heights with his hotly anticipated seventh album — "Losing Sleep" — due Oct. 20, 2017. Named "one of his era's finest traditionalists" by the Associated Press, the upcoming record will be the RCA Records artist's third project in less than two years. An international ambassador for country music, Chris performs to packed houses around the world including his recent appearance at the sold-out C2C Festival in the U.K. With a hit-packed set that highlights his nine chart-toppers — including "Gettin' You Home," "Voices," "Tomorrow," "I'm Comin' Over" and "Think Of You," — and sixteen Gold/Platinum certified projects, Chris has joined reigning ACM Entertainer of the Year Jason Aldean as special guest on his They Don't Know Tour through October before resuming his own headlining dates later this year. For a full list of tour dates and more information, visit chrisyoungcountry.com.