GREAT WALL STATION, Antarctica, Nov. 23, 2017 /PRNewswire/ -- The expedition for the QQ X Project, an undertaking of QQ, the instant messaging service owned and operated by leading Chinese internet firm Tencent Holdings, has successfully arrived at the Great Wall Station in Antarctica (62°12'59" S, 58°57'52" W) at the invitation of stationmaster Chen Bo. Three outstanding individuals, selected from among the 800 million that make up China's youth, will explore the landforms, geomorphology, and species that constitute Earth's southernmost continent. 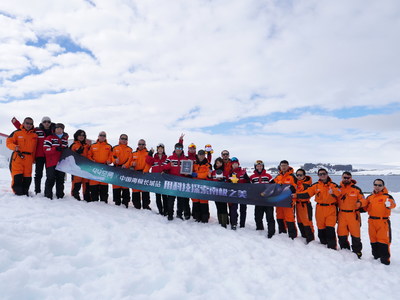 The QQ X Project had stops in the Galapagos Islands, Namibia, Spain and Antarctica. As a whole, the four destinations share the vision of paving the way for young people who dream of exploring the world. At the first three stops, the project received support from the Embassy of Ecuador in China, the Embassy of Namibia in China, the Chinese Arctic and Antarctic Administration, the Charles Darwin Research Institute and the World Wildlife Fund, among others.

The market capitalization of Tencent has currently reached HK$4.13 trillion (approx. US$528.5 billion) on November 21, 2017, overtaking Facebook to rank fifth in the world. Amid the firm's rapid development, Tencent plans to focus on exploring the potential of the world's young people, and better assume social responsibility as an enterprise seeking excellence by exploring the world's natural and humanistic values and connecting more with the world via QQ.