SHENZHEN, China, Jan. 9, 2018 /PRNewswire/ -- Star Wars: The Last Jedi, the eighth live-action theatrical installment in the Star Wars film franchise, has performed well in China both in terms of critical acclaim and the box office following its release in the country on January 5, 2018, with box office receipts there having, to date, exceeded 200 million yuan (approx. US$30 million). Many peripheral products related to the film were rolled out into the market in the wake of the film's release. Most notably, the Stormtrooper doll jointly marketed by Disney and the popular Chinese instant messenger Tencent QQ is the item generating the most sales among China's young Star Wars: The Last Jedi fans. 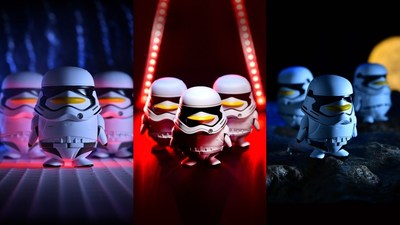 The doll perfectly combines the cutesy QQ penguin logo with the cold face of the Stormtrooper, the most popular character in the film series. In addition to the sleek and elaborate design, the doll comes equipped with a suit of armor that accurately mimics the body protection wear depicted in the film, ultimately creating a skilled universe warrior image embodied by a penguin. The doll has been recognized as the first fashionable peripheral product related to the film in 2018 since its launch in the Chinese market.

In addition to the doll, QQ also rolled out a campaign designed to call up Star Wars elements via both the gesture and the poster. The combination of the jointly branded doll and the QQ-AR technology has created a synergistic mode of interaction between brands from two different sectors, providing momentum to the appeal that the film has among young Chinese audiences.

QQ has played a significant role in boosting the popularity of the film across the youth segment and filling cinemas showing the film to capacity. The interactive approach to promoting the film in the market has pushed the boundary of how films have conventionally been promoted and can expected to become the vehicle that will draw audiences to future efforts of the franchise.