NEUTRINO Energy Group: Developing Projects That Will Make Neutrinos the Energy of the Future 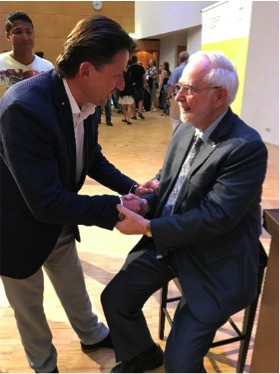 While it may read as science fiction, a team headed by Holger Thorsten Schubart from NEUTRINO Germany (a subsidiary of NEUTRINO USA) is now working on the technology that will convert neutrino energy from the cosmos to electrical power for consumers.

First in line is the development of gadgets that can charge mobile phones. And since big things come from small beginnings, research is ongoing to develop electric cars running on neutrino power, with the penultimate goal of replacing conventional electricity for homes.

The ambitious project, NEUTRINO Power-Cubes will provide heating and all energy requirements of households. This will replace environmentally harmful ways of sourcing and producing electricity from coal and oil. Furthermore, it does this without distribution loss, because energy does not travel long lengths from the source to the destination.

Over a century ago, Albert Einstein’s equation E = mc2 which related the mass of an object to its energy, unwittingly gave birth to the atom bomb. Two scientist’s Japanese scientist Takaaki Kajita and Canadian physicist Arthur McDonald, winners of the Nobel Prize in 2015 for their pioneering research have unlocked a new source of energy – the neutrino. Wars have been fought on many fronts as humankind struggled with sources of clean, renewable energy, globally. Today, instead of building a weapon of mass destruction, science has now figured a way to solve the impending energy crisis.

What is a neutrino and why has it generated a lot of hype? There are basically three kinds or flavors of neutrinos, subatomic particles that have no charge and are practically weightless. They move faster than the speed of light and can go through matter without being altered.

These high-energy particles coming from the radioactive decay light and other sources hit the earth from all points in a continuous stream – unseen, unfelt, but constantly changing in flight. Can this massive and free source of energy be harnessed, making it the “energy source of the future”? If we go by Einstein’s Theory of Relativity then anything that has mass – no matter how minute – contains energy. While the idea of utilizing this free source commercially has been scoffed at, the Nobel Prize Award was a game-changer. What was thought of as non-existent in the past was proven to be real – can the possibility of it being utilized not be far behind?

“Neutrinos originate from a variety of places, such as the Earth’s atmosphere, inside the Sun and other stars, supernovas, and the beginning of space, the Big Bang. Neutrinos can also be artificially made by using a particle accelerator.”  University of Tokyo

The technology for harnessing neutrino is becoming a reality as researchers begin to unravel its secrets. In the foreseeable future, neutrinos transformers may do what solar cells are capable of doing with one big difference – since it is not dependent on sunlight, it can generate energy even in the dark. Imagine the possibilities of an energy source that:

It is time to develop methods of converting the unlimited cosmic energy around us into electricity. This energy is by no means free of charge, but it is significantly ‘freer’ than the energy we rely on today.”  Holger Thorsten Schubart (CEO, Neutrino Group)

“Because of the enormous growth of the world’s energy needs, the exchange from non-visible spectra of cosmic and sun radiation into electricity is a very important project of mankind of the 21st century, maybe even the most important. Neutrinos are a never-ending stream of high energy particles and without any doubt the source of energy of the future…”  Professor Stephen William Hawking

While the atom bomb sowed destruction and fear, we can look forward to harnessing free energy more economically, equitably, and responsibly with NEUTRINO’s innovative alternative technology.

Our political institutions have a duty to lead the way today. 2018 the energy revolution is continued consistently. The sun and time are the two unbeatable allies of the Neutrino Energy concept.

Sources: Science for Innovation, Future and Environmental Protection; the “We give light”-Foundation i.G.; the NEUTRINO Energy Group Scientific Advisory Board: www.neutrino-energy.com, and For Fairer World Technologies by Holger Thorsten Schubart.

Author: Mary Byron (Our special thanks goes to Technewsgadget, who gave permission to republish the article), http://technewsgadget.net

NEUTRINO Deutschland GmbH is a German-American research and development company under the direction of the mathematician Holger Thorsten Schubart. The main office is located in Berlin. NEUTRINO Germany GmbH stands in close cooperation with an international team of scientists and research institutes that specialize in developing applications for the utilization of the nonvisible spectrum of the sun’s rays, the all-pervasive cosmic particles known as “neutrinos” among other things, by converting them into electricity.

Special emphasis is placed upon building and maintaining a close working relationship with universities and other institutions of higher learning in the area of pure research as well as upon establishing an international network of researchers who are active in the field of alternative energy technology.

The economic goal of the NEUTRINO ENERGY Group is to develop and market technological applications for the end user using the latest findings of modern science.

The American holding company NEUTRINO INC. was founded in 2008. The motto of the company is: “NEUTRINO ENERGY, THE ENERGY OF THE FUTURE.”

Original Source: NEUTRINO Energy Group: Developing Projects That Will Make Neutrinos the Energy of the Future