SHENZHEN, China, Feb. 18, 2018 /PRNewswire/ -- With China's Lunar New Year holiday break starting on February 16, the country's movie industry entered its most competitive period of the year. Detective Chinatown II, written and directed by Chen Sicheng, is the result of a close collaboration between Tencent's NOW Live, the internet giant's streaming service, in terms of plot placement and third-party content licensing. The film was released on February 16 and box office receipts exceeded USD 128 million in China. 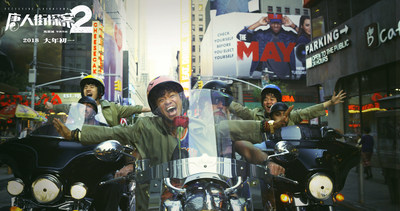 Qin Feng (Liu Haoran) is tricked by Tang Ren (Wang Baoqiang) into attending a world detective content in New York where the gumshoe duo could earn a huge award, all while attempting to solve a murder mystery in a film that is both funny and thrilling. The scene of Tang Ren and Qin Feng in a drag race through Times Square was simulcast live on the NOW Live platform and on one of the large billboards overlooking Times Square. A unit of China's social media giant Tencent, NOW Live is a HD live video platform serving the general public. As part of the cross-border partnership, Detective Chinatown II partnered with NOW Live in terms of plot placement, third-party licensing of the intellectual property as well as film promotion and distribution. The strength of the NOW Live platform, the massive number of active users and the compelling entertainment products, helped to enhance the exposure of the film and is likely one of the reasons why the film had such a successful box office in China.

Live video streaming is a unique component of China's internet culture.Mobile data research firm Jiguang's chart of China's most downloaded apps shows that NOW Live claims a top place among the country's live streaming platforms with 3 million daily active users. Maybe audiences outside of China is unaware of NOW Live. However, as Tang Ren says in the film, "It is hard not to be a big hit once it has been broadcast on the NOW Live platform". The level of popularity of the platform across the youth segment and its ability to make or break a new release in China has become quite evident.