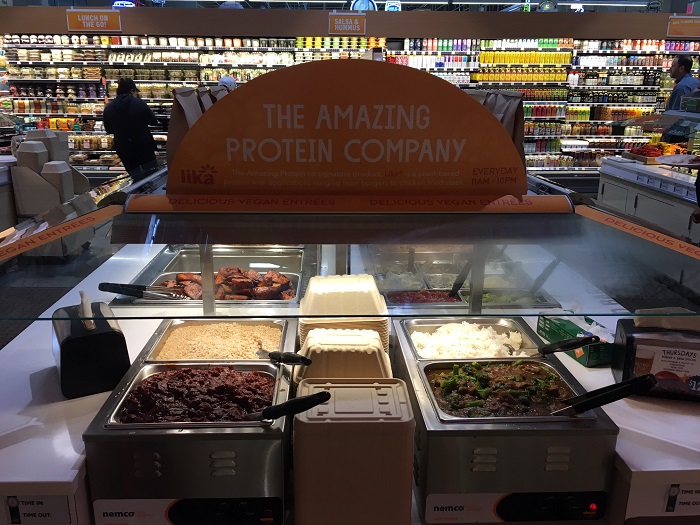 Located in the Prepared Foods Heat & Serve area of the popular market, the new Lika®-branded section offers four Lika® vegan dishes, including the two original selections, Chinese-style Beef & Broccoli and Classic BBQ beef, as well as the addition of Lika® with Coconut Curry and Lika® with Masala Curry. The Coconut Curry selection delivers a rich, exotic, fragrant and perfectly blended creamy taste while the Masala Curry is a savory, aromatic tomato-based entrée with exotic spices, including turmeric, with mouth watering-seasoned flavor. Both cuisine items come with Lika®-style vegetables.

"Since our debut at Whole Foods Market Southern California just a few short weeks ago, our Lika® vegan cuisine has become a major destination item, with customers visiting the locations specifically for our cuisine," said Swami Nathan, Founder-CEO of The Amazing Protein Company, Inc. "We are extremely pleased by the outstanding performance of our Lika® vegan items during this launch phase, and look forward to introducing more Lika® signature products in our continued successful partnership with Whole Foods Market."

Lika® represents the next generation of meat alternatives for the burgeoning vegan market, resounding strongly with the 40% of the general population that has used plant protein in the last three months. (New Hope Network MRCH 2018. The Lika® differences can be found in the way its dishes can be custom-seasoned - in contrast to all other vegan prepared food products that must be pre-seasoned due to their inability to absorb flavoring during the cooking process. As a result, the revolutionary Lika™ Food Preparation Technology represents a game-changer within the hotly-competitive vegan prepared food arena, empowering customers to enjoy a wide array of delicious vegan alternatives their way.

In developing its flagship Lika® line of products, the Amazing Protein Company, Inc. has achieved a milestone scientific breakthrough in the Food Technology of plant protein. While other plant proteins-based products requires pre-seasoning during manufacturing in order to introduce flavor - which limits versatility and leaves their products with the same after taste - Lika®'s proprietary food technology allows preparers to cook it as they would meat, varying the cooking time and temperature to achieve the desired texture they prefer.

Lika® possesses the identical versatility people have come to expect from meat, including the ability to texture it from jerky to stew, utilizing the same diverse cooking methods chefs use for animal protein. As a result, Lika® foods can be prepared as barbecued, fried, roasted, based, smoked or sautéed as LIka® products absorb flavor even better than animal protein, including sauces marinades and spices - all without any after taste, preservatives or additives. Instead of the 20-35 ingredients in many plant proteins, Lika® is made from only five natural, clean ingredients, wheat, mushroom, barley, yeast and water.

From the California company's meatballs, BBQ slices, breakfast patties and strips to its meatloaf, Buffalo wing nuggets and Southern Fried Chicken Nuggets, Lika® Heat & Serve foods offer enhanced protein versatility that allows for diverse entrees within any canopy of cuisine – just like their meat counterparts. At the same time, the texture of Lika® prepared cuisine is meaty yet tender, delicious with no harsh after-taste and completely satisfying without harming one's health - or the health of the planet. For the weight-conscious, Lika® foods offer drastically reduced calories, saturated fats and cholesterol over their meat counterparts. And for the planet, each pound of Lika® product saves 1,800 gallons of water.

About The Amazing Protein Company:

Headquartered in Santa Cruz, California, The Amazing Protein Company is the manufacturer of the Lika® line of vegan cuisines. Representing a breakthrough in the art of vegan food preparation, the Company's Lika® cuisines results from a proprietary Food Preparation technology that delivers foods already enjoyed by people the world over while perfectly preserving or improving flavor, texture and nutrition.