SkullSplitter Dice Introduces Their Buy One – Give One Program 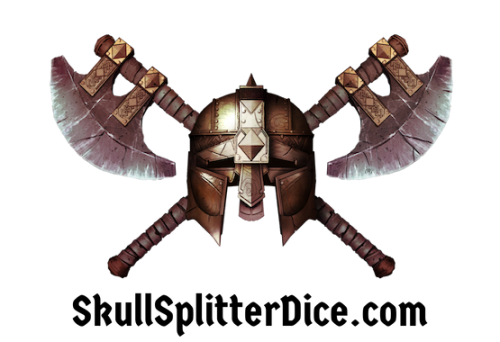 hanks to the popularity of the Netflix series Stranger Things and so many famous players coming forward as tabletop gamers, Dungeons & Dragons playing clubs are making a comeback in schools across the nation. Research has shown that role playing games like Dungeons & Dragons help to improve problem solving, critical thinking, interpersonal, and math skills. These abilities have become crucial for school-aged children because they not only help them in their personal development, but they're the exact same skills that colleges and employers are demanding in this day and age.

It is with this in mind that SkullSplitter, one of America's premier providers of Dungeons & Dragons gaming accessories, has announced the introduction of their Buy One - Give One program. The program donates a d&d dice set for every qualifying purchase to a high school Dungeons & Dragons or Role-Playing Gaming Club to help promote growth and membership in those clubs.

"I started playing Dungeons & Dragons in 1992 and it helped me a lot in both the military and the business world, as well as helping me improve my math grades in high school," says Ted Cory, founder of SkullSplitter Dice.

Since 2015, SkullSplitter Dice has donated thousands of sets of dnd dice. "We wanted to do more than we were currently doing, and we knew our customers would love to help introduce new players to their favorite pastime," Mr. Cory continued.

More than just Dungeons & Dragons metal dice, SkullSplitter's products are perfect for Pathfinder, ShadowRun, War Hammer and so many more role playing games. Their online store features a vast selection of d&d dice, all aimed at creating an unmatched experience for every player.

Ted Cory went on to say, "Our 11-year-old loves to play Dungeons & Dragons, and is getting valuable experience negotiating and making mistakes in a safe environment. Now, thanks to our customers, we can help bring tabletop gaming to kids across the United States for them to learn, play, and enjoy as well."

SkullSplitter Dice is a premier seller of Dungeons & Dragons dice sets and other gaming accessories for Dungeons and Dragons and other tabletop roleplaying games. Based out of Saint Petersburg, Florida, SkullSplitter is a veteran owned small business. Ted, the founder, has been playing since 1992.