Historical data on S&P 500 buybacks are available at www.spdji.com/indices/equity/sp-500.

"After lowering expenditures in the first half of the year from their tax-inspired record-setting buying spree of 2018, companies increased their share repurchases by 6.3% in the third quarter," said Howard Silverblatt, Senior Index Analyst at S&P Dow Jones Indices.  "While the levels still pale in comparison to 2018, they are significantly higher than the pre-2018 levels, and surpass the hoped for $170 billion mark, which was seen as the level needed to support stocks and continue reduced share count EPS growth. For Q4, the market is looking for another increase in buybacks, in the mid-single digit range, staying near the $190 billion level, well shy of the Q4 2018 record-setting $223 billion."

Silverblatt also found that buybacks continue to be top heavy, with the top 20 issues accounting for 50.4% of the buybacks, compared to the 10-year average of 44.5%.

The five issues with the highest total buybacks for Q3 2019 are: 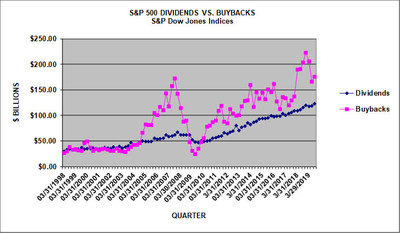 S&P Dow Jones Indices is the largest global resource for essential index-based concepts, data and research, and home to iconic financial market indicators, such as the S&P 500® and the Dow Jones Industrial Average®. More assets are invested in products based on our indices than products based on indices from any other provider in the world. Since Charles Dow invented the first index in 1884, S&P DJI has been innovating and developing indices across the spectrum of asset classes helping to define the way investors measure and trade the markets.