What Are The Best Penny Stocks To Watch Right Now? 3 To Know

By: Penny Stocks to Buy, Picks, News and Information | PennyStocks.com - Feed
3 Penny Stocks To Watch Heading Into The Weekend

This has been a crazy week for penny stocks. It’s also been a wild one for blue-chip stocks too. But no matter how you slice it, I think small-caps one the award so far. Not only have wee seen some of the biggest breakouts of stocks under $1 running to well over $4, but we’ve also seen stocks under $5 run above $15 in a matter of 24 hours.

It is big moves like these that continue to attract investors to buy penny stocks. While not everyone will explode like these examples, there’s a better chance of seeing a 100% jump or more in lower-priced stocks than, say, Apple.

This week, for example, Arca Biopharma Inc. (ABIO Stock Report) was one of the top penny stocks to watch. This is a penny stock that barely traded before today. I’m talking a “big day” was 100,000 shares. Even though it was a $3 penny stock, that comparative dollar volume is minimal compared to most other active penny stocks to watch. Needless to say, by the end of the day on May 27th, ABIO stock had traded 5,005 shares and closed at $3.95.

Are Penny Stocks Worth It?

What happened on May 28th is what makes penny stocks a game-changing equity class. The company announced a new development program to evaluate its AB201 treatment as a potential treatment for COVID-19 associated coagulopathy and the related inflammatory response. The company said it anticipates filing an IND application with the FDA in the third quarter of this year. Thanks to that headline, and the fact that it is a low-float penny stock, ABIO stock was absolutely explosive on Thursday. Shares jumped to highs of $22 and closed out around $19.20. It also traded more than 80 million shares.

This just goes to show that penny stocks can break out at any point. It’s important to note reasons as to why and other factors like publicly available share float that could be responsible for parabolic moves. So if someone ever asks why trade penny stocks? I’m sure you can quickly explain with an image of the ABIO stock chart. In any case, there are obvious risks which include public float. 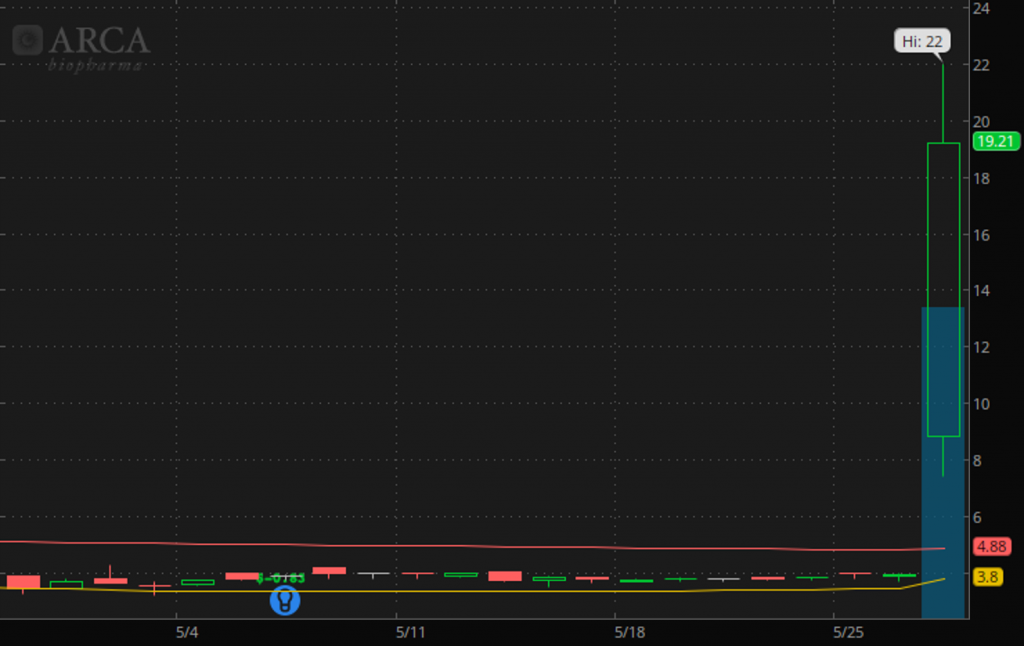 Lower numbers of shares in the market mean the price can move up and down just as quickly. The name of the game is to make money with penny stocks so it’s ok to take profit. The worst-case scenario is you trade it again later if the trend is strong. Will ABIO stock keep going?

That’s hard to say but with big moves like this, there are always volatility risks at play and something else mentioned in the PR to take note of. Arca said, “Pending FDA concurrence” AND “obtaining trial funding,” ARCA will begin late-stage trials. A lot of unknowns for a stock now traded above $15 a share that was under $4 a day ago. Either way, it’s a clear example of “why penny stocks?”

Right on the cusp of penny stock territory, Dynavax Technologies (DVAX Stock Report) joins the list of penny stocks to watch. If DVAX stock seems familiar, that’s probably because it was one of the big winners from last year. At the time it started hitting the radar, DVAX stock was trading around $3.70. From August through mid-December, Dynavax stock rallied to highs of $7.20. A clear example of a penny stock producing triple digits over the span of months; not hours. In any event, DVAX stock ended up coming back down to earth in 2020 and eventually reached a low of $1.80. However since then DVAX stock has been on the rise.

A collaboration with Clover Biopharmaceuticals to evaluate a potential coronavirus (COVID-19) vaccine candidate triggered the early move. In fact, DVAX managed to reach highs of $7.15 last week. The last few days haven’t been kind to the penny stock. This came after Dynavax announced an $80 million offering at $5 a share. So of course the market would sell-off to trade closer to where the money was raised.

However, after settling out around its 200-Day moving average, things might be looking up. No news came out but as we always say, he details are in the filings. On May 28th a FORM4 Filing indicating an insider trade showed a large purchase. Company Director Andrew Hack purchased 1 million shares of DVAX stock at a price of $5. Insider sentiment can be a big gauge for the market and considering DVAX stock closed at $4.84, this might be something to take note of if this is on your list right now. 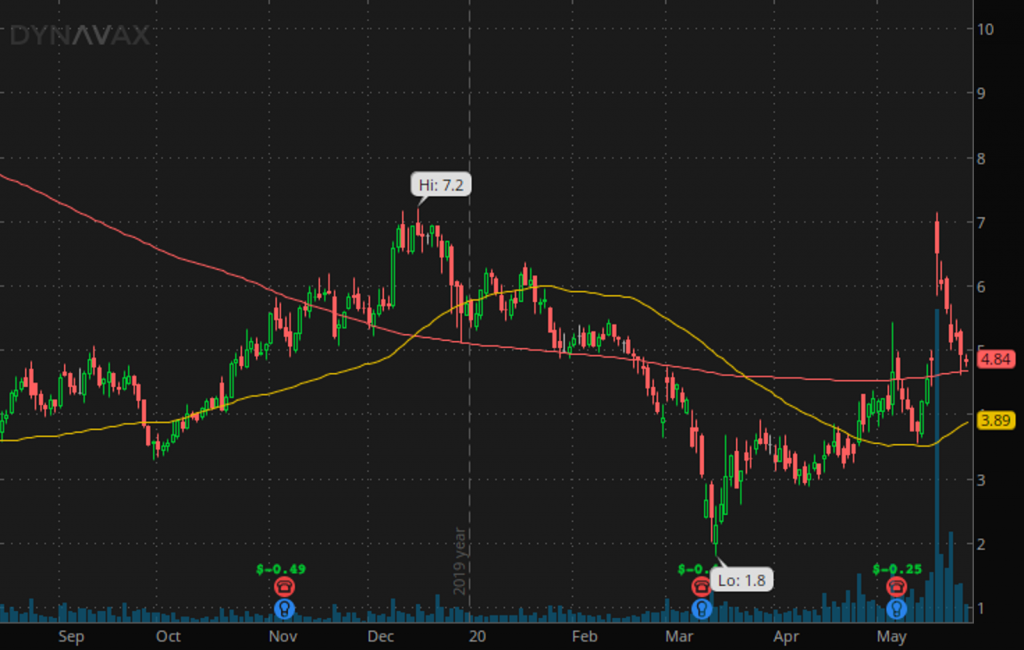 Shares of Jaguar Health (JAGX Stock Report) might be on a few lists heading into the weekend. Before I get into what might have become a potential catalyst, let’s take a look at the company itself. This week hasn’t been particularly kind in the market. This comes as Jaguar announced warrant exercises late last week. However, a recent podcast feature and a new update on Thursday could be something to note.

In particular, Jaguar announced that it has submitted to the U.S. FDA’s Center for Veterinary Medicine what it expects is the final major regulatory filing to support approval of its oral plant-based drug candidate Canalevia™. It’s used to treat chemotherapy-induced diarrhea in dogs. In an 8-K filing on Thursday, it was revealed that on May 27, 2020, Napo Pharmaceuticals, Inc., the Company’s wholly-owned subsidiary, received notification from NIAID.

Its request for testing crofelemer has been approved and that crofelemer will be tested against five different viruses, one of which is SARS-CoV-2. But something else to consider is the filing pointed out something else as well. “For clarity, this is not Mytesi finished product (i.e. delayed release tablets) and the testing does not involve any human studies.” It will be interesting to see how the market digests that information before the weekend. 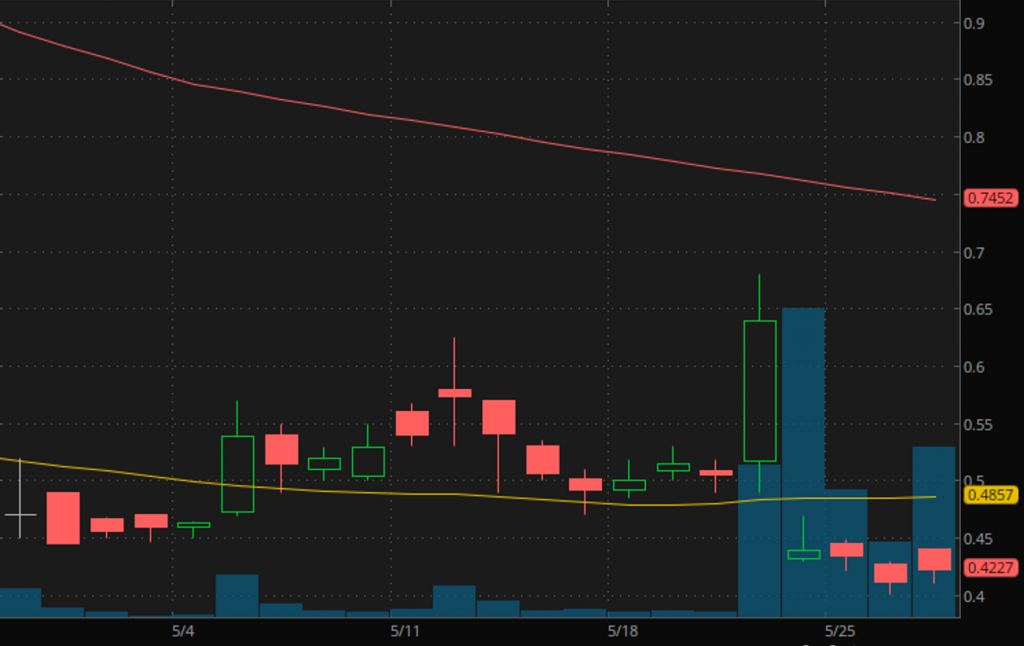 Finally, Summit Midstream (SMLP Stock Report) saw an above-average trading volume day on Thursday. Shares of SMLP stock jumped from an open of $0.93 to highs of $1.08. The company is an energy solutions provider involved in the oil and gas industry. As we all know by now, the oil and gas sector has gotten beaten up over the last few months.

Thanks mostly to COVID-19, supply is greatly outpacing demand. Simple economics say that’s no good for high prices. When prices decline, oil companies’ value tends to follow. This year we saw certain futures actually go negative. Oil futures recovered after seeing early losses on Thursday. Data showed an unexpected rise in U.S. crude inventories, which were waved off. Oil and gas penny stocks like SMLP saw a benefit as indicated by the higher levels of activity. What’s more, is that Summit also made headlines on Thursday.

The company announced that it has closed the previously announced acquisition from Energy Capital Partners II LLC, of Summit Midstream Partners, LLC, the privately held company that indirectly owns SMLP’s general partner, Summit Midstream GP, LLC. This included 5.9 million SMLP common units owned directly by an affiliate of ECP, for $35 million in cash plus warrants covering up to 10 million SMLP common units. As the week comes to a close, we’ll see how the market reacts to this new development. Will SMLP be on your list of penny stocks to watch before June? 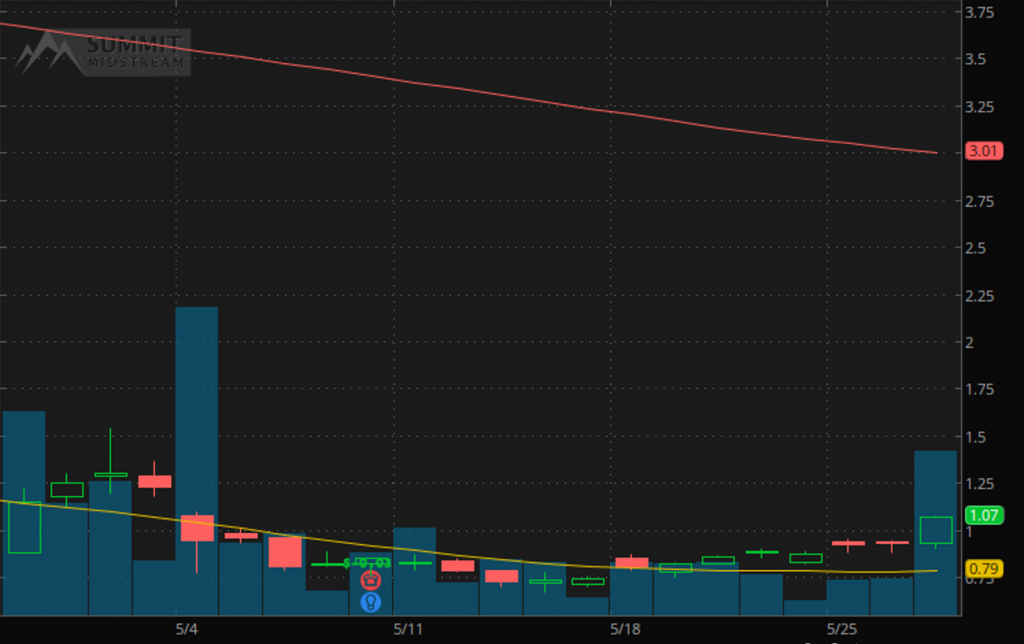