5 Penny Stocks On Robinhood To Watch Before August 2020

By: Penny Stocks to Buy, Picks, News and Information | PennyStocks.com - Feed
These Robinhood Penny Stocks Are Catching A Lot More Attention This Week

Why buy penny stocks on Robinhood? You’ve obviously got your pick of any broker out there offering access to stocks under $5, right? So what makes Robinhood so popular for trading them? Despite all of the shortcomings and technological issues arising from the app, there’s been a surge of millions of new users flocking to the mobile broker.

In fact, during the first quarter of this year alone, the company posted a record 3 million new accounts. Compared to other major brokers who may offer low or no-cost models and even have better executions on trades, Robinhood has remained a go-to for new traders right now. It may be the ease of use or “gamification” feel. Whatever the case is, I’m not here to pump up online brokers.

But for millions of Robinhood users looking for penny stocks, the app itself makes it easy to follow the money so to speak. One of the features actually shows the total number of accounts holding a given stock. This is how we find popular penny stocks on Robinhood that may be on some watch lists right now.

Remember, though that just because traders flock to some of these, it doesn’t mean that they’re the best penny stocks to buy. This herd mentality can get tricky especially when hype is involved. Think about some of the biggest breakouts we’ve seen this year. They may have been profitable at some points.

But at the height of the “hype”, there were likely thousands of accounts holding shares as the penny stocks “topped out”. So if you’re looking for penny stocks on Robinhood, do more research than just seeing how many accounts hold shares. With this in mind, are any of these on your list right now?

Spectrum Pharmaceuticals Inc. (SPPI Stock Report) focuses on acquiring, developing, and commercializing oncology therapies. It has had a relatively quiet year. There wasn’t even a major sell-off during the March madness breakdown. However, SPPI stock did experience a massive blow toward the end of 2019. That’s when shares dropped from over $10 to under $4 within a matter of a few weeks. This is important to note because of the reason why shares fell.

Its Phase 2 clinical trial evaluating poziotinib in previously treated non-small cell lung cancer didn’t meet its primary endpoint for objective response rate. However, after facing the music, SPPI stock has, as I said, chugged along for most of the year. It climbed from $2 in March to around $3.25 in July. On Monday afternoon, attention began focusing on Spectrum in a major way. This came after another big news update; this time more positive than its December press release.

The company said it saw positive results from the Phase 2 trial of its cancer drug, poziotinib. Spectrum reported that the trial met its pre-specified primary endpoint in previously-treated patients with non-small cell lung cancer that also have specific HER2 exon 20 insertion mutations. About 90 patients received an oral, daily dose of 16 mg of poziotinib in the study according to the company.

“The positive results of Cohort 2 are a significant milestone and we are looking forward to meeting with the FDA,” said Joe Turgeon , President and CEO of Spectrum Pharmaceuticals. With under 5,000 accounts holding this penny stock on Robinhood, will this update spark some interest when the market opens on Tuesday? 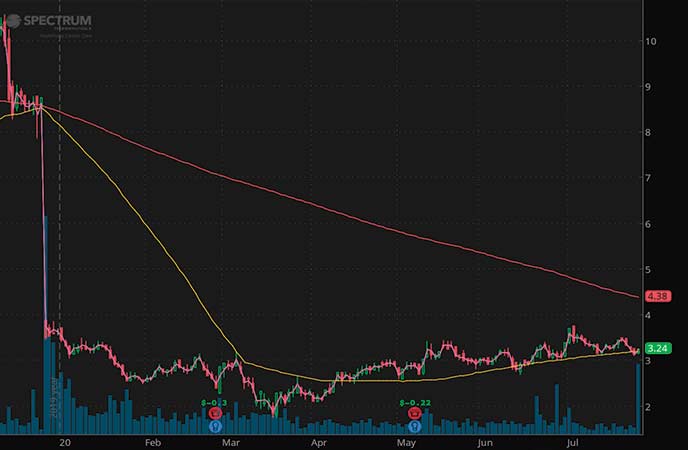 Back in March, we picked back up on Ambev S.A. (ABEV Stock Report) as most other stocks were selling off. Obviously ABEV stock followed suit but since then things have been back on the rise. The Brazilian local arm of beer giant, Anheuser Busch InBev, said in a statement that it planned to deliver 5,000 sanitizer gel bottles to every public hospital in Sao Paulo, Rio de Janeiro, and Brasilia. That was where most of the country’s coronavirus cases were concentrated at the time. Thus, a beer company turned into a coronavirus penny stock for a period of time.

What’s happened since then? May was somewhat of a turning point for ABEV stock this year. The company reported its earnings and though it missed estimates on EPS, it beat on sales figures. But there hasn’t been much more coming from the company via headlines at least. The stock’s been moving up and daily volumes are around 30 million shares a day.

There are also around 10,000 accounts holding shares of this penny stock on Robinhood. If this is on your watch list, it’s important to note upcoming earnings. In its last report, the company made an ominous statement. Ambev said that it expects second quarter earnings could be “materially worse” than the first quarter. Headline risk could play a role when the company reports. However, until then, ABEV stock has continued to push higher. Where do you think this will be once the company reports? Feel free to leave a comment below. 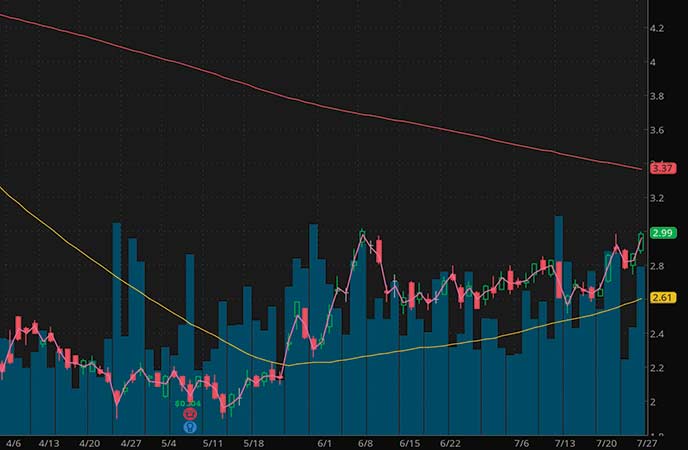 If you’ve read our articles, you’ve definitely come across Biolase Inc. (BIOL Stock Report) here and there. There hasn’t been many big updates from the company. In fact, the last update from Biolase was the announcement of the closing of a rights offering.

But that doesn’t mean there wasn’t anything to cite as a potential catalyst recently. If you do a little bit of searching, you’ll see another company’s news was something to take into consideration. Creekwood Dental Arts added two new BIOLASE® Epic Hygiene™ lasers to the practice.

Creekwood explained, “With these additions to their in-office technology, they are able to offer a greater selection of minimally invasive treatments and even more effective hygiene cleanings, while also minimizing infection risks—an advantage that is especially important during the COVID-19 pandemic.”

There wasn’t any follow-up from Biolase confirming any additional details. However, momentum has carried through and into this week. As far as Robinhood is concerned, there are roughly 12,000 accounts holding the penny stock. 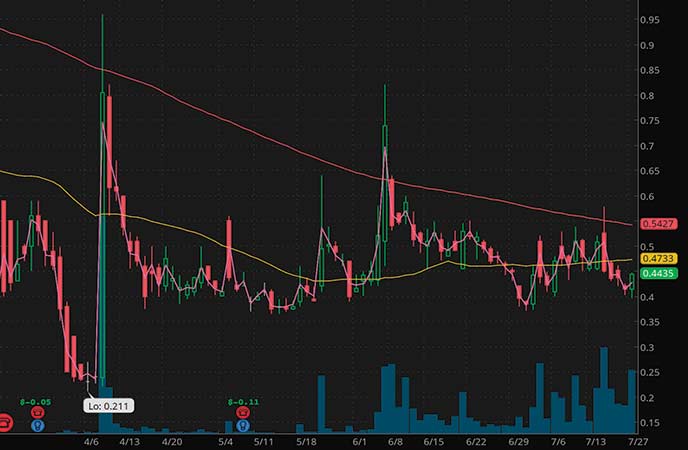 Here and there Pareteum Corporation (TEUM Stock Report) has gotten attention. For the most part, however, TEUM stock has been mostly sporadic. Besides a few “one-off” days of above-average volume, the penny stock is normally a lighter traded one. There haven’t been any new updates from the company since the first week and a half of the month. But on Monday, TEUM stock caught another pop of momentum. It ended up running from around $0.70 to over $0.90 with strong trading going into the close.

The last update from July came when Pareteum simply announced that it was granted an extension by NASDAQ to remain on the exchange. Previous to that, the company had inked a deal with Liberty Global, a multinational telecommunications company, to build a pan-European Voicemail platform.

Besides these updates, there’s been no other news. However, you can see a new filing that came out this week. This went over the specifics of a subscription agreement that the company entered into back in February. The end date of that agreement was July 27th. With more than 27,000 users holding shares of this penny stock on Robinhood, could this have been the catalyst for Monday’s momentum & does it signal a turnaround for TEUM stock? 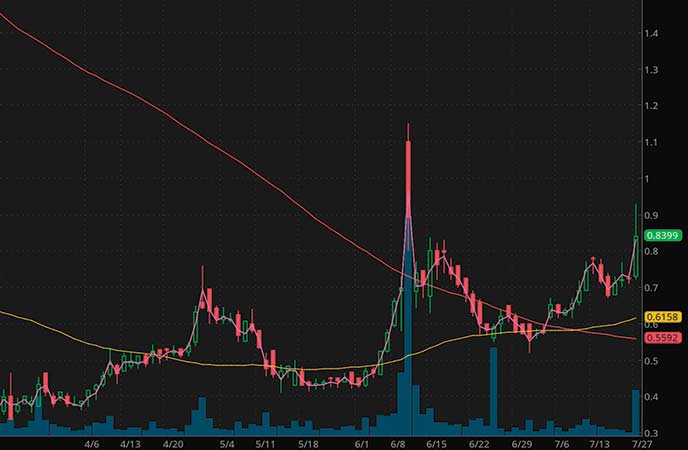 If you want to talk about a blast from the past, India Globalization Capital Inc. (IGC Stock Report) might fit that mold. Back in late 2018 and early 2019, IGC stock was on fire. With the growing excitement around things like cannabis, this was certainly one of the marijuana penny stocks to watch. Unfortunately, it didn’t stay that way and IGC is back in penny stock territory. Similar to TEUM, IGC is another quiet mover. It doesn’t trade all that much on average. However, since March, shares of IGC stock have climbed from around $0.30 to highs of $0.75 at the end of June. Even today, the penny stock made a push back to $0.70.

Last week the company made two big updates. First it received a Notice of Allowance dated July 8, 2020 from the United States Patent and Trademark Office for its cannabinoid formulation for the treatment of seizures in humans and veterinary animals. Then India Globalization announced the filing of a patent application, IGC-511, with the USPTO. This was for a new cannabinoid formulation intended for the treatment of chronic pain, muscular pain, and neuropathic pain in humans and veterinary animals.

The company commented further saying, “We have recently been issued two patents for our cannabinoid formulations to treat pain (IGC-501) and eating disorders (IGC-504), and we received a Notice of Allowance for our cannabinoid formulation to treat seizures (IGC-502). The filing of a patent application is no guarantee that the USPTO will approve or grant the patent; as such, we can give no assurance that the patent will in fact be granted.”

The penny stock surged in late afternoon trading. With more than 61,000 users holding shares of this penny stock on Robinhood, will IGC stock be one to watch this week? 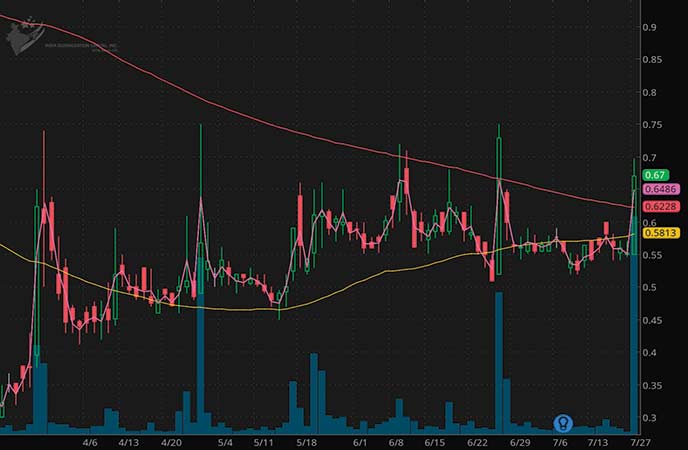