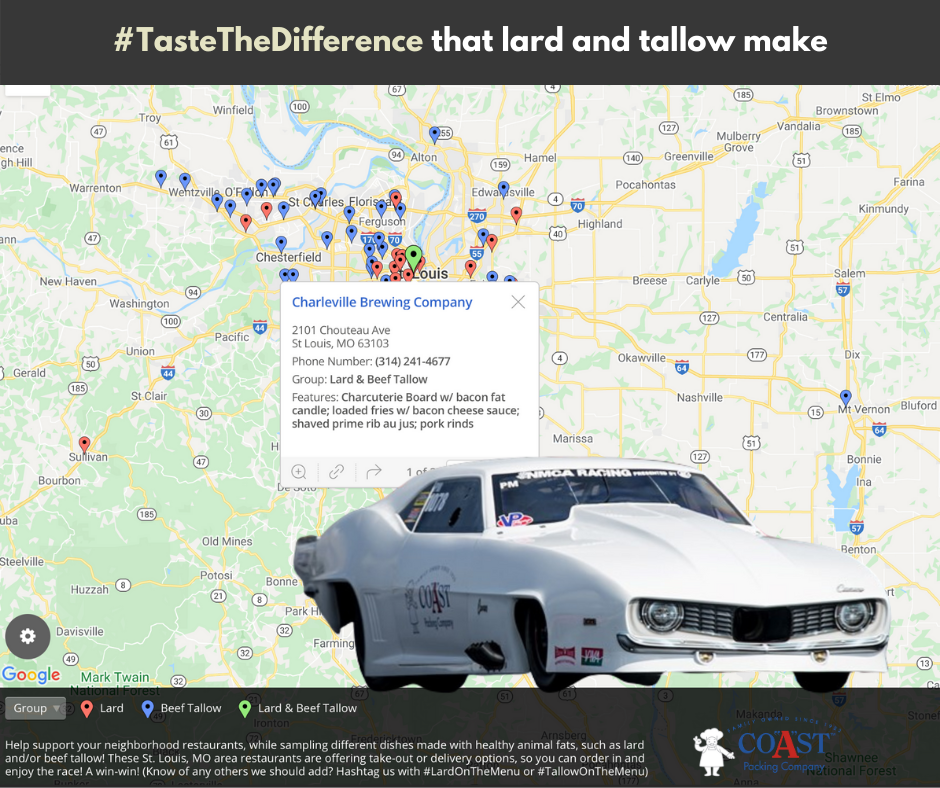 As this unprecedented summer rolls on, the NMRA/NMCA Super Bowl of Street Legal Drag Racing (https://www.nmcadigital.com/2020-event-info/madison-illinois-general-info/) powers to the Mississippi for the World Wide Technology Raceway at Gateway in Madison, Illinois – including competitors like Coast Packing Company’s CEO Eric R. “Goose” Gustafson and his ’69 Noonan Hemi ProCharger Pro Mod Camaro, this time waving the banner of “Takeout or Delivery” #FatMap618.

For the occasion, Coast has whipped up its special online gastronomic compendium of  local spots where fans can “Taste the Difference” that lard and beef tallow make in popular dishes – dishes available by delivery or on a take-out basis (explore the #FatMap https://batchgeo.com/map/70c06b127a851a722e593920b761c025). The 67 St. Louis-area locations across 37 cities on #FatMap618 all feature dishes prepared with lard and/or beef tallow.

As the swing event in the points chase, racers in each class are looking to position themselves for a second-half charge to the top of the points standings – and at this writing, the advantage goes to Coast, which is currently leading in the points race. True to its name, the popular Super Bowl event is packed with drama and record-setting passes. These turbocharged, supercharged, nitrous-powered monsters will once again go heads-up in quest of Street Legal Drag Racing glory.  And, thanks to #FatMap618, in quest of food to match.

“Diners may be socially distanced, people are continuing to get up close and personal with the food they love,” Gustafson said.  “These days, diverse, delicious dining options still abound, giving everyone the opportunity to sample authentic, flavorful regional cuisine wherever they happen to be most comfortable.”

Now marking its 98th year in business, Coast Packing Company (www.coastpacking.com), a closely held corporation, is the number one supplier of animal fat shortenings – particularly lard and beef tallow — in the Western United States. The company sells to major manufacturers, distributors, retailers, smaller food service operations and leading bakeries. The company participates actively in diverse ethnic markets – from Hispanic retail chains, with its VIVA brand, to various Asian specialty markets. Based in Vernon, Calif., Coast Packing Company is regional, national and, increasingly, global. In some cases, supplier relationships are multigenerational, extending back 50 years and more. Coast is a founding member of the Healthy Fats Coalition (http://www.healthyfatscoalition.org/).