Did Fiverr (FVRR) Push These Penny Stocks Higher This Week?

When it comes to penny stocks, we always talk about a sympathy trade as a potential reason for momentum. What is a sympathy trade? Generally speaking, a sympathy trade is when a larger company or piece of market news causes rallies in other stocks that may have some exposure to a particular sector or business model. This year, there were plenty of ways to find a sympathy trade when it came to COVID-19. It was also one of the clearest examples of the phenomenon.

Remember when Pfizer was in the news regarding government funding for potential coronavirus treatments? During that time, not only did PFE stock jump big, so did many penny stocks that were working on vaccines or testing options. While the news had something to do specifically with Pfizer, the speculation was all about “what if”. Basically, the thought is that since Pfizer benefited like it did, “what if” XYZ company follows suit. Now, all penny stocks didn’t get government funding. But the thought of the potential that they could, became a driving force.

This is where Fiverr International (FVRR Stock Report) could come into play. If you’re unfamiliar with the company itself, Fiverr is an online retailer of sorts. The company has an online platform offering people to sell services starting at $5. This week, FVRR stock reached new, all-time highs. When you’re talking about a sympathy trade, you won’t need to look any further than some of the eCommerce and internet penny stocks trading higher this month.

We might better categorize Party City Holdco Inc. (PRTY Stock Report) under the “brick and click” category. The company has storefronts across the U.S. and recently tapped an opportunity to expand its digital footprint. Obviously, with the coronavirus lockdowns, retailers have had to manage some serious hurdles in order to generate revenue. While some completely failed, others began finding new ways to thrive. Party City is one of the companies and you can see this optimism reflected in the PRTY stock price.

When we first began following PRTY stock more closely in May, the company had found itself actually benefiting from things like drive-by birthdays. Furthermore, Party City reported stronger than expected sales last quarter. Much of the surprise came from leveraging its online platform. The company saw online sales increase by 83.2%. This also helped the company beat analyst estimates on revenue for the quarter.

There are still restrictions across the country when it comes to in-person interaction. However, Party City has already begun preparing for its busy season: Halloween. During the remainder of 2020, the company plans to close approximately 21 stores, open 4 new stores, with approximately 6 new store openings planned to shift into 2021. With the surge of interest in eCommerce stocks, PRTY has also benefited from the upbeat sentiment in sympathy with this sector. Will that continue through the month of September? 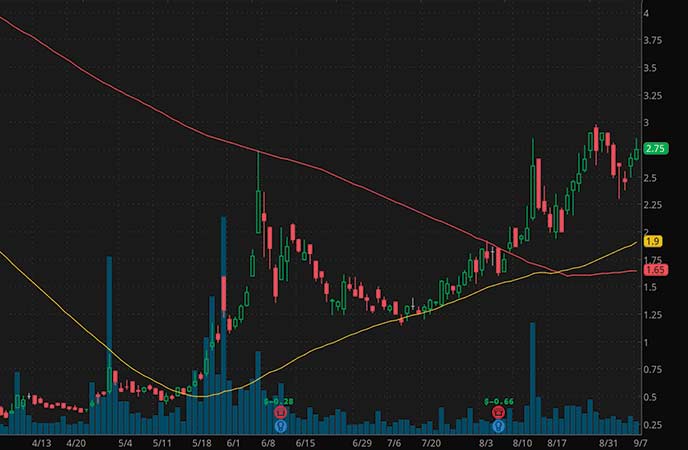 Renren Inc. (RENN Stock Report) is another one of the internet penny stocks to watch. According to the company, Renren was once known as China’s leading real-name social network. Its founder, Mr. Chen Yizhou, is one of the pioneers of China’s Internet industry. Renren is currently focusing on the Internet industry and specifically on the two major areas of real estate and automobiles. Its business segments mainly include used car business and overseas SaaS business.

However, at the end of August, its Kaixin Auto subsidiary exited the used-car dealership business. That came after experiencing a severe impact from the coronavirus pandemic. What could be a focal point in light of this is the company’s Chime subsidiary. Chime is a real estate technology company. It has built out customer relationship, content, and marketing management systems for its clients. Furthermore, Chime established a strategic partnership with Dippidi, a done-for-you content marketing and social media ad agency.

According to the company, by combining Chime’s platform with Dippidi’s custom marketing strategies, real estate agents, teams, and brokerages “can stop spending time chasing leads and attract the business they want.”

Could this be the latest catalyst to push RENN stock this week? On Thursday, shares jumped over 30% to highs of $1.80 during the morning session. 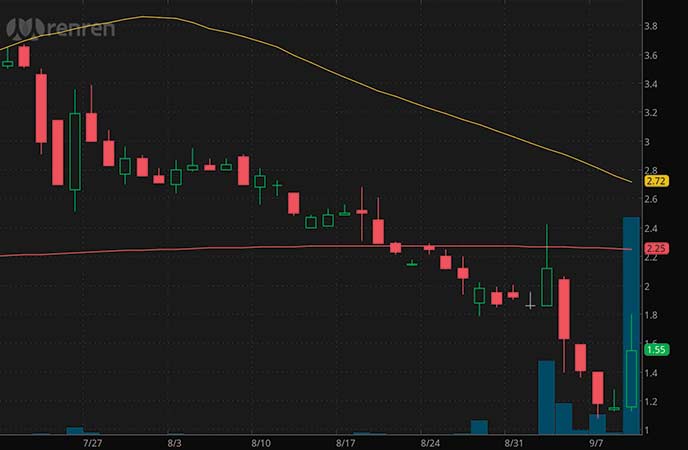 It has been some time since we covered Waitr Holdings (WTRH Stock Report). But it hasn’t been from a lack of trying. WTRH stock has become somewhat of a cult penny stock over the last year. We first discovered Waitr back in November of 2019. At the time there were so many more questions than answers.

To be honest, the penny stock resembled more of a ghost ship than anything, based on a lack of information and leadership. It appeared that even the company would agree with that before taking a firm stance at righting the ship  In a press release Carl Grimstad, then Chairman and CEO of Waitr said that “distractions resulted in a lack of focus on our customers and operations.”

Since then, WTRH stock has gone on one of the most epic runs. From around $0.30 on November 18th, 2019 to highs of $5.85 on August 8th, 2020, the penny stock rallied 1,850%. We hadn’t covered it for the better part of the las several weeks as WTRH stock left the range of penny stocks in its rearview. However, recent consolidation brought shares back belo the $5 threshold (for now).

How is Waitr tied into the list of internet penny stocks? The company deployed a similar model as UberEats, GrubHub, and PostMates. Waitr is an on-demand food ordering and delivery company. Along with Bite Squad connect, Waitr’s able to offer local restaurants and grocery stores direct access to customers in underserved U.S. markets. Waitr and Bite Squad operate in small and medium-sized markets in the United States in over 700 cities. 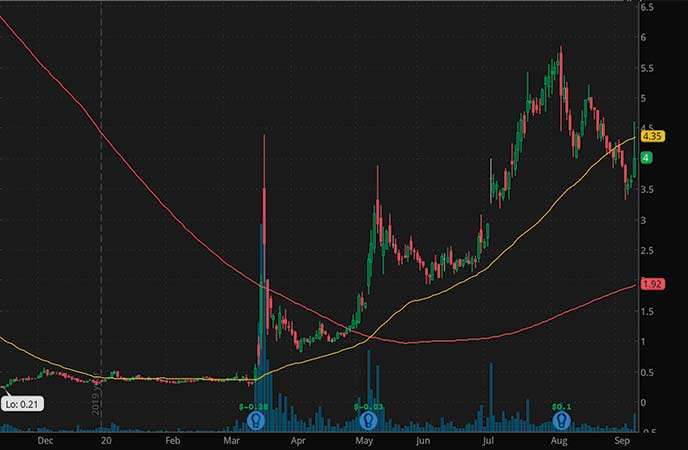 Boxlight Corporation (BOXL Stock Report) was a big winner among penny stocks in July. The growing interest in how education would look in the fall was a big factor. Boxlight provides interactive technology solutions for the global education market. BOXL stock was a major focus for traders looking to get in on the speculation regarding online education in the fall. Shares rallied from around $0.90 to highs of $4.65 in July.

Here and there it sees intermittent spikes. However, since reaching those highs, BOXL stock has been stuck in a perpetual downtrend. On Thursday, the penny stock caught another big burst of momentum after Samsung put out a tweet. It said: “School closures due to the COVID-19 pandemic have affected 1.5 billion children worldwide. We have the technology, ecosystem and expertise to help students and educators stay connected with #remotelearning solutions.” 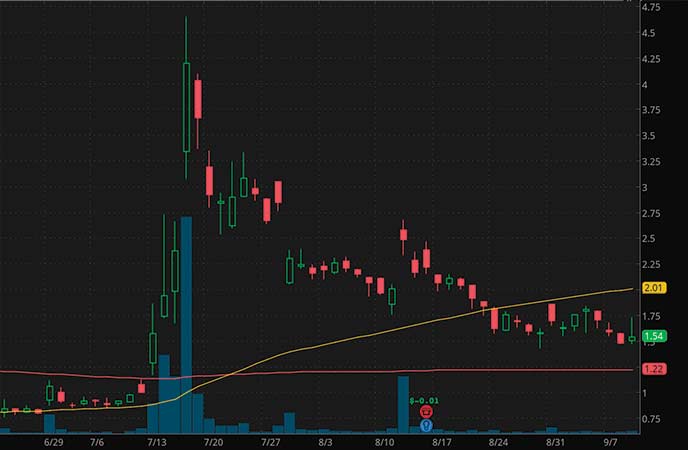