By: Stockmarket.com
Are These The Best Consumer Staples Stocks To Buy In October 2020?

Consumer staples stocks have been interesting to watch in the 2020 market. This is due to the sheer amount of consumer staples stocks around. There are food companies that are restaurants, packaged food makers, supermarkets, and more. The pandemic has caused a split in this sector, with companies like Chipotle Mexican Grill (CMG Stock Report) and Domino’s Pizza Inc. (DPZ Stock Report) seeing the benefits that the pandemic has brought to some.

Food establishments that we’re able to remain open throughout the peak moments of the pandemic have been among those to strive. Yet still, many other top consumer staples stocks are struggling. Restaurants are still not open inside or to full capacity in many places, bringing in much fewer customers. This has people turning to supermarkets and fast food/takeout type situations to solve their hunger. Let’s look at a few consumer staples stocks that have been trending in 2020.

First up on this list of consumer staples stocks investors may be hungry for, is Kellogg Company (K Stock Report). Kellogg produces food, primarily cereal and snacks. Some of Kellogg’s brands include Cheez-It, Frosted Flakes, Pringles, and many more. Currently, Kellogg’s products are distributed in more than 180 countries around the world. Since most of its products are offered in supermarkets, it has actually been able to perform rather well in the market. This caused an increase of K stock price in 2020.

Before its quarterly reports came out, analysts believed that it would be at $0.93 a share in earnings. Kellogg beat that estimate and reported $1.24 a share which is 33% more than what was originally thought. The CEO of the company, Steve Cahillane said that the future of the company is “unknowable”, but it seems like Kellogg is moving in the correct direction. That is why K stock is on this list of consumer staples stocks to watch.

The next food stock to watch on this list is General Mills Inc. (GIS Stock Report) for similar reasons as K stock. General Mills is a food producer that sells packaged foods in supermarkets all over the world. Some of its popular brands include Totino’s, Pillsbury, Haagen-Dazs, Cheerios, Lucky Charms, and many more. General Mills actively holds more than 100 brands under its umbrella. On September 23rd, the company released its fiscal 2021 first-quarter results. 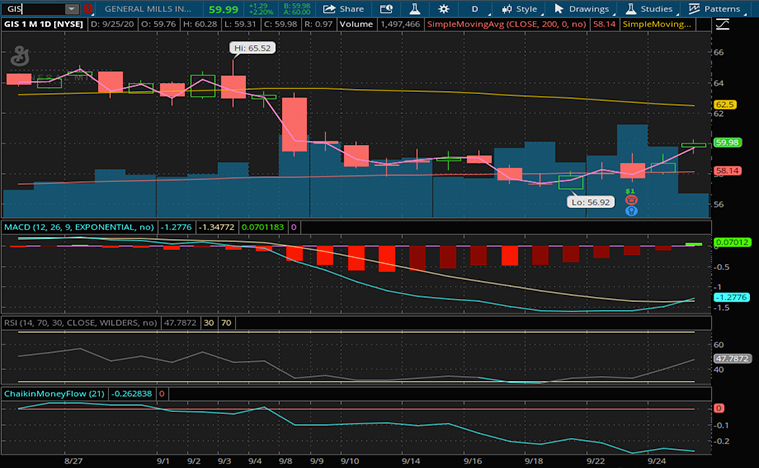 Net sales for the company increased 9% to $4.4 billion. Its organic net sales rose 10% as well. General Mills operating profit went up 29% to $854 million.

The CEO of the company, Jeff Harmening stated, “We continued to drive exceptional results this quarter, highlighted by broad-based market share gains amid elevated at-home food demand due to the COVID-19 pandemic.”

This positive momentum for General Mills is what is brought it upon this list of consumer staples stocks to watch.

Last but not least on this list of consumer staples stocks to watch is PepsiCo Inc. (PEP Stock Report). PepsiCo is a well-known beverage company to most around the world by now. PepsiCo is the second-largest food and beverage company in the entire world. By net revenue, PepsiCo comes in the first place. Some of its popular products include Pepsi, Gatorade, Tropicana, Quaker Oats, Lay’s Cheetos, and many more. Back in July PepsiCo released its second-quarter results, which moved PEP stock right after. 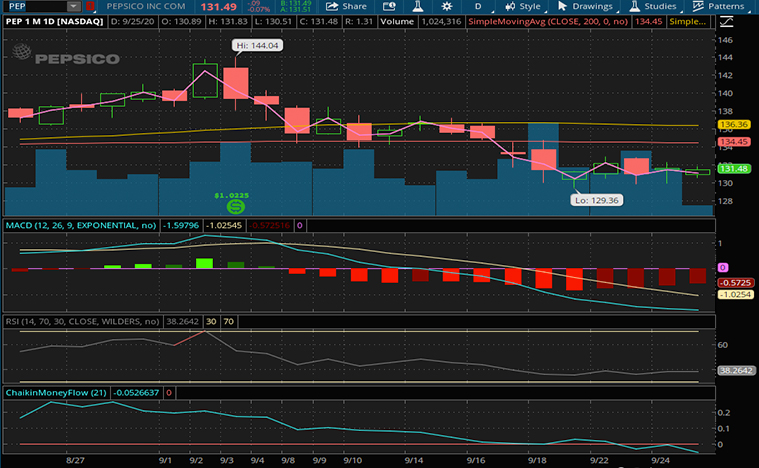 For the company, net sales went down, yet reports were more positive than analysts predicted. PEP stock has been able to make a comeback in 2020. It started the year at $131 a share on average, and on September 24th it is also at $131 a share on average. If the pandemic slows more and reopening continues worldwide, it will have a good effect on Pepsi’s financials. Despite PEP stock large dip back in March, it has shown strength ever since, bringing itself back to the price it was formerly at. That is why it has made the final spot on this list of consumer staples stocks to watch.