By: Penny Stocks to Buy, Picks, News and Information | PennyStocks.com - Feed
4 Top Penny Stocks To Watch Before Next Week

A penny stock is referred to as any equity that trades below $5. In 2020, this niche of the market has been growing in popularity for a few reasons. People are searching for more ways to make money in 2020. This has people wanting to make money with penny stocks. These stocks allow an investor to enter the market at a lesser cost than traditional stocks.

So penny stocks can be beneficial for those who want profit without investing a lot. The problem is that these stocks are highly volatile, more than normal blue chip stocks. At the same time, the high-risk high reward factor of penny stocks attracts investors itself.

The potential for gains is the reason that these stocks should not simply be overlooked by new investors. Let’s take a look at 4 penny stocks that have been showing positive market performance throughout 2020.

First on this list of penny stocks to watch is Acorda Therapeutics Inc. (ACOR Stock Report). Acorda is a biopharmaceutical company that develops and commercializes therapies for different neurological disorders. The United States-based company produces many different drugs including Ampyra, for improving walking in patients with multiples sclerosis. On August 4th, the company released its second-quarter results for 2020.

These results announced that its INBRIJA drug brought in $4.7 million, AMPYRA $26.1 million, and INBRIJA cartons dispensed increased 13% over Q1. The CEO, Ron Cohen M.D. stated, “We were pleased with INBRIJA’s performance in the second quarter, especially in light of the significant disruption of COVID-19. Net sales increased by 7% over the first quarter and dispensed cartons, which reflect actual demand, increased by 13%. This trend continued into July, with dispensed cartons increasing 8% over June, to the highest number since the beginning of the launch.”

The company additionally saw prescriptions increase to 75%, up from 57% in quarter one. Friday morning, ACOR stock ended up taking off early in the morning. The momentum continued surging throughout the session with ACOR experiencing its highest, single-session share volume of the year. One of the driving forces late this week appears to have stemmed from an update on a Government Contract with the Department of Veterans Affairs* signed on Sam. gov on the 24th for “pharmaceutical preparation manufacturing”. 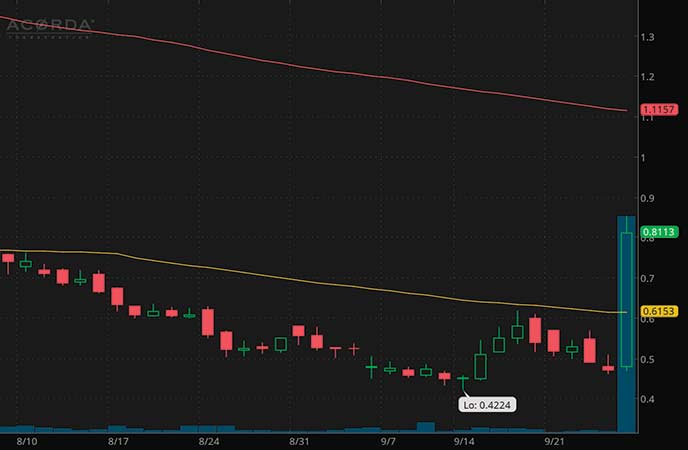 Next up on this list of penny stocks is Corbus Pharmaceuticals Holdings Inc. (CRBP Stock Report). Corbus is a clinical-stage pharmaceutical company that focuses on developing and commercializing therapeutics. These treatments are usually for rare, chronic, and serious inflammatory and fibrotic diseases. One of its leading products is lenabasum, which is in Phase III clinical trials to treat systemic sclerosis and dermatomyositis.

On August 6th, the company released its second-quarter results for 2020. The company stated that its Phase III study of lenabasum is on schedule for topline data this summer. Its balance sheet strengthened with up to $121 million in new capital. The CEO of the company, Yuval Cohen Ph.D said, “We recently announced that we completed sales of $71 million through our ATM program and entered a debt financing agreement for up to $50 million with the first $20 million already received, strengthening our balance sheet and putting us in a solid financial position before topline data.”

The company still dealt with a net loss of $38.1 million, compared to net income of $2.2 million. Currently, CRBP stock is down but could that mean things could turn around for it in the stock market? That is unsure, but when it comes to biotech penny stocks, Corbus has raised some eyebrows this week. There’s still quite a way to go before it can reclaim it’s August levels. 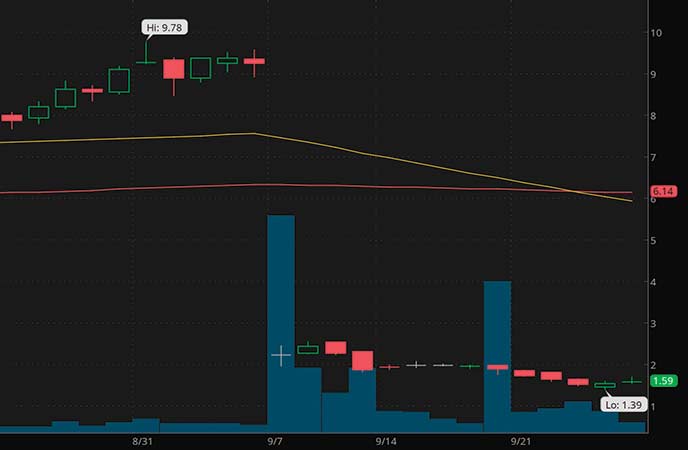 The company has seen positive momentum of AQB stock throughout 2020. The company gained some interest after presenting at several conferences including the LD 500, H.C. Wainwright, and Lake Street 4th Annual BIG4. After reporting its recent quarterly results more attention has centered around the company.

“The highlight of the second quarter was the announcement of our first harvest of conventional Atlantic salmon at our Indiana farm, an important milestone as we refine harvest systems and processes ahead of our expected initial harvest of AquAdvantage salmon in the fourth quarter this year in Indiana, followed by the anticipated first harvest of AquAdvantage salmon at our Canada-based, Prince Edward Island Farm in the first quarter of 2021.”

AQB stock is up 87.5% in 2020, making a top contender on this list of penny stocks to watch based on percentage gains on the year. What’s more is that in September, alone, AQB stock has climbed over 60%. Will that continue into the fourth quarter with the company expecting more milestones before year-end? 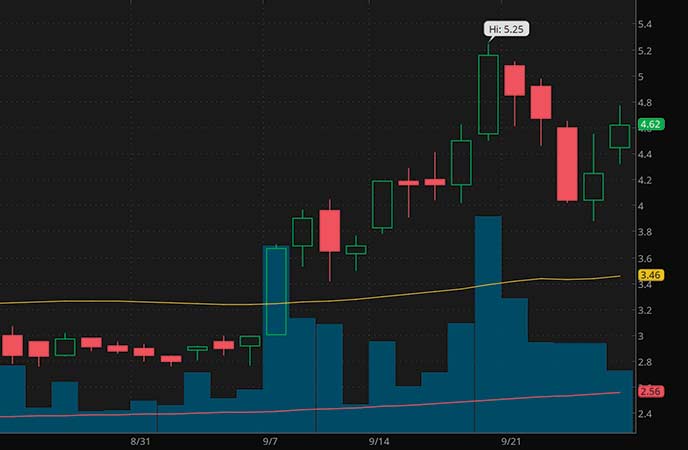 Last on this list of penny stocks is Zomedica Pharmaceuticals Corp. (ZOM Stock Report). The stock has been one of the popular penny stocks under 10 cents to watch recently. Zomdeica is a developmental stage veterinary diagnostic and pharmaceutical company. It focuses on the discovery, development, and commercialization of pharmaceuticals meant for household pets. One of its primary offerings is ZM-008, an oral suspension formulation of metronidazole for treating acute diarrhea in small dogs and puppies.

This company decided to release its second-quarter results on August 10th. It announced that in April, it had completed a $4 million offering of common shares and warrants. Zomedica then did the same in May, for $20 million. Despite this, Zomedica was operating at a net loss. The company has managed to fight off the effects of the pandemic, and strengthen its balance sheet as well.

It continues developing its TRUFORMA platform, which is the current focus on the company. ZOM stock is down 69% in 2020 as of September 25th. That doesn’t mean all hope is gone. One of the things to note with Zomedica is that the company’s proxy solicitor, Alliance Advisors mailed a letter to shareholders in advance of a special meeting being held this week. The basis of that message was urging shareholders to vote in favor of a reverse stock split. The hope is that the 1 for 25 or 1 for 50 reverse will gain majority approval so that the company can get back in compliance with the NYSE American Exchange. Should this reverse go through, it will be interesting to see if the market reacts favorably or if a sell-off ensues.