It’s already been a crazy week for penny stocks and we’re only 1 day in. Just like last week, this week kicked off with a volatile penny stock breakout that sparked further momentum for small-caps. Initially, what has started with OXBR shares surging has translated into an all-out bull run for stocks under $5.

The crazy part is that if you’ve searched for hot penny stocks, you might actually be overwhelmed. Shares of OXBR have since settled down (for now) but that doesn’t mean much for the rest of the small-cap & micro-cap arena.

Those who are new to trading penny stocks may want to take a minute and reflect on today. The breakouts we saw this morning weren’t for the faint of heart. It took a lot of patience and plenty of psychological fortitude to handle those big swings. This afternoon kicked off just like the morning with another round of big movers. The difference with some, as you’ll see, is that there wasn’t any immediate news or filing catalysts to speak of. Therein lies the skill of knowing how to research penny stocks.

Depending on the industry, there are other places to search for answers. This includes sites like the SAM . gov site to view government contracts, the FDA site to find clinical trial information, and the USPTO site for pending or approved patents. Generally speaking, that information will come out before a company announces it as an event. Not all penny stocks will have a pinpointed catalyst. But it’s better to understand – if you can – why a stock’s breaking out so you can plan out your trade. Here were some of the top penny stocks today seeing some interesting activity.

A few weeks ago, we picked up on United Microelectronics Corporation (UMC Stock Report) after markets focused on the semiconductor space. Tech stocks were high-flying and United Micro was coming off of fresh sales results for August. During the month, the company recorded $14,841,818 compared to $13,184,069 year over year. Furthermore, from January to August, its revenue was $116,990,748 compared to $95,526,360 year over year.

For all intents and purposes, United Micro has been on a growth trajectory for most of the year. The company has two segments, Wafer Fabrication and New Business. It focuses on circuit design, mask tooling, wafer fabrication, and assembly. Additionally, United Microelectronics does some solar business as well. While United Micro had no news itself, today several semiconductor stocks have benefited from a broader piece of news.

The Commerce Department told U.S. computer-chip companies that they must obtain licenses before exporting certain technology to China’s largest manufacturer of semiconductors, SMIC. In light of this limitation, other chip makers, like United Micro ended up outperforming certain other tech names on Monday.

Obviously, had you not bee away of this news, the UMC stock price jump “came out of nowhere”. But as we’ve continued seeing, the “sympathy trade” has been alive and well among small-caps. The penny stock hit a high of $4.97, continuing higher after the closing bell. This marked a jump of roughly 16% since the last time we discussed UMC. It’s also up roughly 88% for the quarter.

Both HSBC and JP Morgan Chase boosted their ratings on UMC this month. HSBC went from Hold to Buy. JP Morgan lifted its Underweight rating to Neutral. 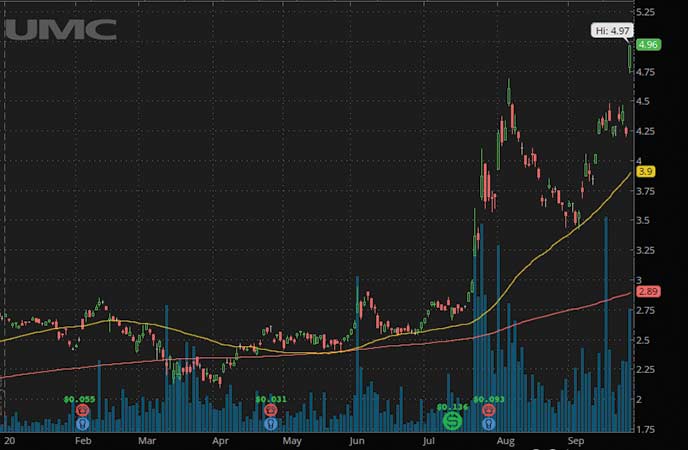 Biotech penny stocks have been at the top of watch lists this week. Galectin Therapeutics Inc. (GALT Stock Report) hasn’t disappointed either. So far, this week, GALT stock has set new 2020 highs. Monday’s market session saw the penny stock race from under $3 to over $4 during post-market trading. In this case, you won’t find any news from the company as of this article’s timestamp.

[Read More] 4 Penny Stocks To Buy For Under $3 Today; Are They Worth It?

However, there are a few “dots” that have started to connect for some traders in the rumor mill. It first starts with Galectin’s September 22nd PR. The company announced that it would host an investor conference call and webinar to discuss the Company’s NASH-RX clinical trial and to introduce its new CEO, Joel Lewis. The date of that call is Tuesday.

Furthermore, a look at the clinical trials website will show something more. As of the 22nd, changes were made to its study evaluating the efficacy and safety of Belapectin (GR-MD-02) for the prevention of esophageal varices in NASH Cirrhosis. Both the study status and contact/locations were adjusted. The company appears to have begun recruiting at Texas Clinical Research Institute in Arlington as well as IU Health University Hospital in Indianapolis.

Considering that this call is after the close on Tuesday, it will be interesting to see what transpires during the regular market session. Will this be a continuation followthrough into the rest of the month or simply a “buy the rumor” hype-up with a “sell the news” kicker? If you base it on H.C. Wainwright’s latest actions, the firm thinks GALT stock could be worth more than 2x the current price. H.C. recently boosted its price target to $12 on August 13th. Do you agree? 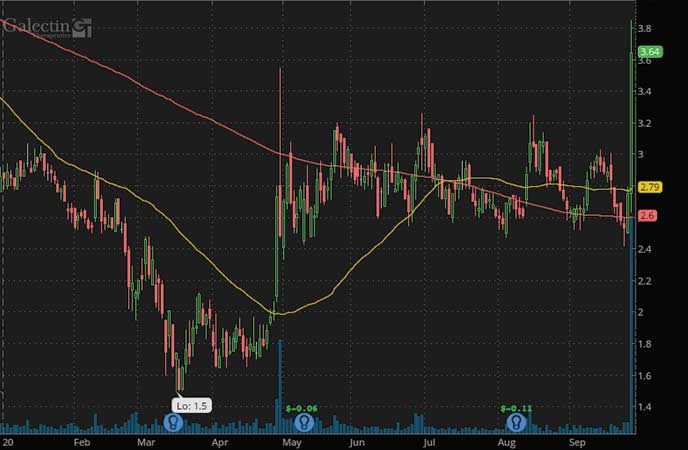 Sesen Bio Inc. (SESN Stock Report) managed to eke out a green close on Monday. The stock’s been under some pressure recently following a mid-week sell-off last week. The 3-day downtrend took SESN stock from highs of $1.54 to a low of $1.21 last Thursday. However, during the last 2 sessions, Sesen has attempted a reversal.

The filing goes on to state that, “All of the Drug Substance PPQ batches and the first of three Drug Product PPQ batches met all quality acceptance criteria…Testing of these batches is currently underway and is expected to be completed in November 2020.”

The results of the quality testing of the PPQ campaigns for Drug Substance and Drug Product are a key component for the last module of Sesen’s Biologics License Application submission for Vicineum to the FDA. The company expects to complete this in the upcoming fourth quarter. In Q3 alone, SESN stock is up around 88% as of today’s close. 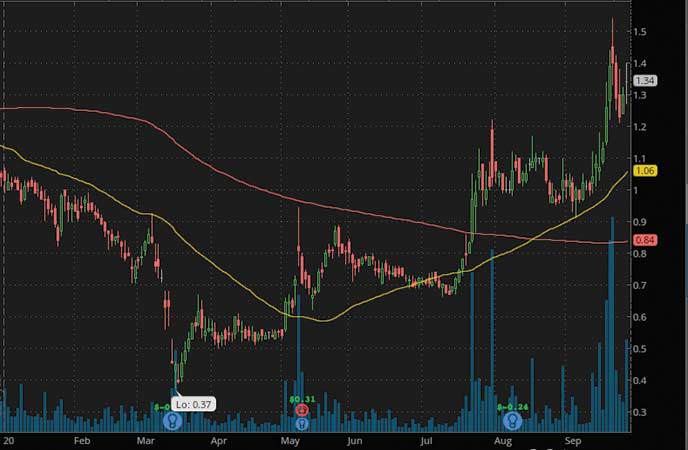