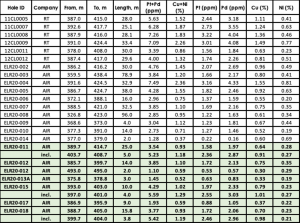 the assay results broaden the Escape Lake deposit laterally into a larger lens of mineralization that appears to be “ponded up” against the Escape Lake Fault to the south. ”— Abraham Drost, CEOTHUNDER BAY, ONTARIO, CANADA, September 30, 2020 /EINPresswire.com/ -- Clean Air Metals Inc. (TSXV:AIR; OTCQB:CLRMF) is pleased to announce new assay results from the drilling campaign currently underway at the Company’s 100%-owned Thunder Bay North Project (the “Project”).

Abraham Drost, CEO of Clean Air Metals stated that “the assay results from Hole ELR20-011, 012, 13A, 15, 17 and 18 broaden the Escape Lake deposit laterally into a larger lens of mineralization that appears to be “ponded up” against the Escape Lake Fault to the south.

While it is early days and there is work to be done to prepare the Escape Lake deposit for inclusion in the Nordmin Engineering resource validation exercise, it is encouraging that drill targeting based on previous drill results and recent geophysics, has allowed the Company to accurately identify a high-grade core and thicker east side “sail” to the Escape Lake deposit. Average dimensions are now interpreted at approximately 200m long by 175m wide by an average thickness of 30m, with an average specific gravity of 3.1 tonnes per cubic metre.

The Escape Lake Zone mineralization identified thus far is located at a depth of approximately 325m-425m vertical depth within the Escape Lake Intrusion. The objective of the ongoing program is to define the magnitude of the Escape Lake Mineralized Zone to support the calculation of a mineral resource estimate and mine plan by Nordmin Engineering Ltd., (announced August 11, 2020) for the Escape Lake horizon in addition to the Current Lake deposit, the subject of an Historic Estimate referenced below.

The Escape Lake Intrusion and magma conduit which is the Company’s present focus in Phase 1 drilling (see Table 1), appears to be a standalone, separate twin structure to the Current Lake Intrusion (“Current Lake”) and magma conduit on the Thunder Bay North Project on which there exists a historic estimate of 9.8 million tonnes (Indicated). The Historic Estimate is from pit constrained and underground sources (see Table 2).