By: Penny Stocks to Buy, Picks, News and Information | PennyStocks.com - Feed
Are These Penny Stocks To Buy Now Or Wait?

Sometimes penny stocks can be easily identified as a buy or sell. However, one of the things that tend to set the strong apart from the weak are stocks that have followthrough. It’s true and something we’ve seen many times during the last few months. You’ll get penny stocks that breakout big no matter how low the price.

It might be stocks under 10 cents or it could be stocks between $4 and $5. Regardless, we’ve seen breakouts. But think about the ones that have lasted the longest. These are the day trades that turned into swing trades and the swing trades that turned into investments. The main difference between the stocks that saw short-term gains fizzle and stocks that experienced longer-term uptrends was the follow-through.

What did the companies do to continue communicating positive sentiment to their shareholders? How did the volume profile look after the initial “big day”? Were there insiders or funds diluting the market? All of these key aspects were some of the popular topics to note during times where stocks took to the skies. So what do you do with this information? Well, you use it.

More times than not, the whole reason someone “hates penny stocks” is because they held too long or believed the hype more than stuck to their trading plan. Keeping this in mind, if you find trending penny stocks to add to your watch list, assess the situation in front of you. Then determine if you’re going to enter a day trade at first or plan to swing trade. Obviously, volume plays a role but so does momentum and consistency of that volume.

Heading into the second half of this week, there are several penny stocks that’ve approached new weekly highs. Are they a Buy right now or should you avoid them at all costs?

Akebia Therapeutics Inc. (AKBA Stock Report) was a big winner from the first time we began following the company. Last November, AKBA stock was trading below $4 and eventually rallied to a high of more than $13 by late-June. Why are we mentioning this company now? Well, a recent, unfortunate event caused the penny stock to drop back below the $5 threshold. In fact, AKBA reached a low of $2.34 in late September.

The company’s PRO2TECT phase 3 program, the second of its 2 global cardiovascular outcomes programs, evaluated the efficacy and safety of its vadadustat to treat anemia in adult patients not on dialysis. It didn’t meet the safety MACE endpoint. However, the company’s management remained upbeat saying, “We still believe we have a path toward approval for vadadustat in non-dialysis,” said John P. Butler, President and CEO of Akebia. Fast-forward a few weeks and now AKBA stock has bounced back as high as $3.57 so far this week.

[Read More] What Could The Apple Event Mean For Penny Stocks? 3 To Watch

On Monday, Akebia announced a late-stage presentation on vadadustat data will be given at the American Society of Nephrology Kidney Week 2020 Reimagined. Since the dates of the conference aren’t until next week, there could be some speculative optimism to consider in the market right now. In May, Akebia reported positive top-line results of vadadustat to treat anemia in adult patients on dialysis. The drug met its primary and key secondary efficacy endpoints and also achieved the primary safety endpoint.

The last 4 sessions have seen increasing volume and price. Since its 52-week low in September, AKBA climbed over 50%, to date. 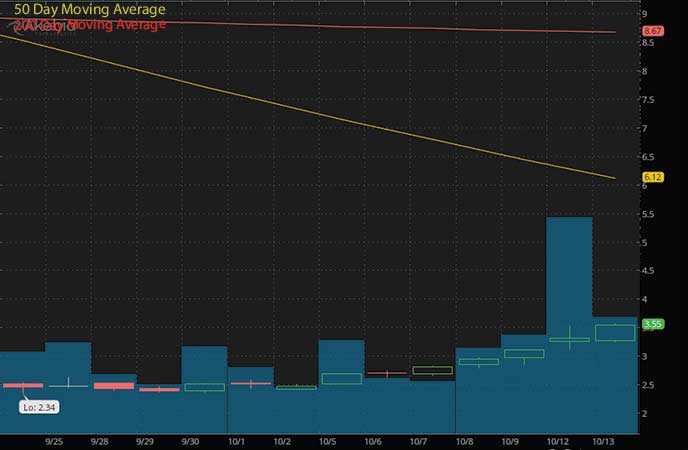 Aethlon Medical Inc. (AEMD Stock Report) caught a surge of interest on Tuesday. Prior to this, AEMD stock was very quiet barely trading fewer than a few hundred thousand shares per day for the last several months. By power hour on October 13th, however, AEMD stock had traded more than 3.8 million shares. The initial catalyst came as word hit that analysts at Zacks gave a new price target on the penny stock. The firm issued an $8 target on AEMD stock. The research cited:

“We are encouraged by the company s pipeline to study the Hemopurifier in two early feasibility studies around the treatment of patients with head and neck cancer and, separately, those with COVID-19. We believe receipt in August 2020 of an NIDCR grant for collaborative (with the University of Pittsburgh) multi-institution studies in head and neck cancer validates the potential of the Hemopurifier.”

In January, the penny stock ran from around $1.30 to highs of $4.34 on COVID-19 momentum. But over the last few months, AEMD stock has come back down to earth. One thing to note that the company hasn’t reported any new developments in quite sometime. Aside from a few industry and investor presentations, Aethlon was relatively quiet until this report. Whether this is a “buy” or “sell” won’t just depend on the recent surge of momentum but rather what comes next. It’s ok to be skeptical when it comes to analyst-fueled catalysts. But also worth noting the increased attention on the penny stock. How would you rate it? 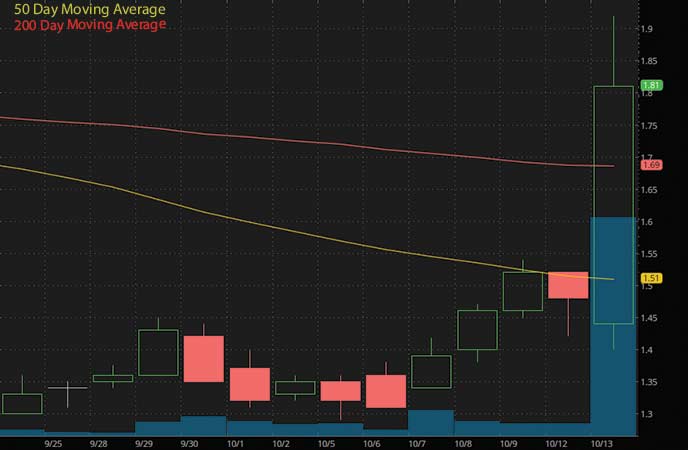 Ocean Power Technologies Inc. (OPTT Stock Report) had a modest day on Tuesday in comparison to some of its previous sessions. The penny stock hit an early high of $2.52 during its morning session. Furthermore, the company has been part of the recent surge in alternative power generation companies these last few weeks.

The company’s PowerBuoy® system integrates patented technologies in hydrodynamics, electronics, energy conversion, and computer control systems to extract energy in ocean waves. The result is a system that turns wave power into electricity for offshore applications. Along with other energy penny stocks, OPTT shares climbed. But if you look for news or filings, you won’t likely find much. Needless to say, there have been recent developments of sorts this month.

While there weren’t any new headlines in October, there were some potential sources of catalysts to look at. On October 6th, the company released a tweet in reference to its product offering. The message said, “OPT’s Marine Surveillance System offers remote, autonomous, low- to zero-carbon surveillance for security and enforcement efforts.”

Again, similar to AEMD, the “what’s to come” will depend a lot on the follow-through, if any, this week. Can the energy stock trend remain intact? 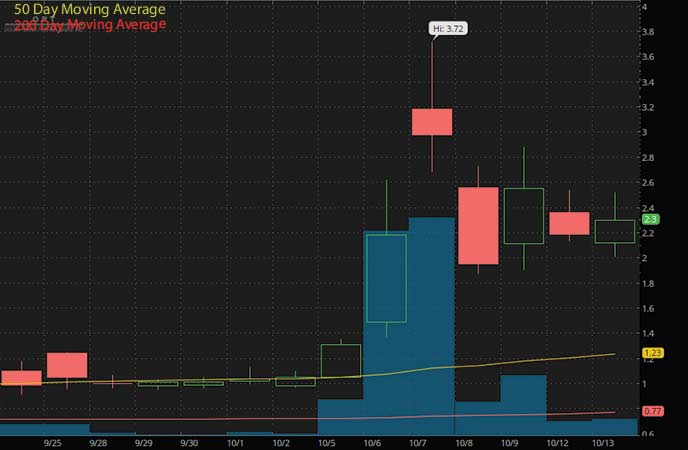