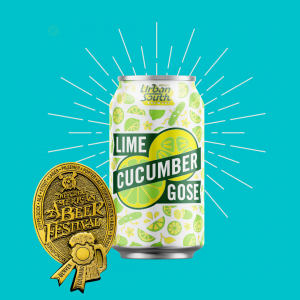 We are honored to be recognized alongside some of the country’s best craft breweries during a year that has challenged our industry more than ever before.”— Jacob LandryNEW ORLEANS, LA, USA, October 19, 2020 /EINPresswire.com/ -- Urban South Brewery’s Lime Cucumber Gose won a gold medal at the 2020 Great American Beer Festival (GABF) competition awards ceremony on Friday, October 16. The best beers in 91 different categories covering 170 beer styles were awarded gold, silver and bronze medals during a virtual ceremony hosted on The Brewing Network.

“We are honored to be recognized alongside some of the country’s best craft breweries during a year that has challenged our industry more than ever before,” said Jacob Landry, founder of Urban South Brewery. “We owe it all to our amazing fans who continue to support us and our incredible team who continues to push the boundaries of excellence and innovation.”

Lime Cucumber Gose is Urban South Brewery’s take on the traditional German Gose: an unfiltered, kettle soured wheat beer finished with kosher salt, key lime and fresh pressed cucumber. The beer was launched as a taproom-only offering in 2017, and later moved into Urban South’s distribution footprint as a seasonal summer beer. Due to consumer demand, Lime Cucumber Gose officially became part of Urban South’s core lineup as a year round offering in August of this year.

The Great American Beer Festival invites breweries from across the country to enter beers to be judged by the festival’s Professional Judge Panel. The ultimate goal of the panel is to identify the three beers that best represent each beer style category. One of the most celebrated awards programs in the industry, the Professional Judge Panel awards gold, silver and bronze medals that are recognized around the world as symbols of brewing excellence. Urban South Brewery received a gold medal for Lime Cucumber Gose due to its proper balance of taste, aroma and appearance, accurately exemplifying the Field Beer style as a world-class beer.


About Urban South Brewery
Founded in 2016, Urban South Brewery inspires community and fellowship through the gospel of good beer. With deep roots in Louisiana and a new satellite location in Texas, Urban South - HTX, the award-winning brewery is making its mark in the beer industry. Recent accolades include: 2020 Beer Army Awards (Gold and Silver), 2019 U.S. Beer Open Championships (Silver), 2019 Best of Craft Beer Awards (Bronze), 2019 Beer Army Awards (Gold and Silver), 2018 US Beer Open (Silver), 2018 Can Can Awards (Gold, Silver, Bronze) and 2018 Beer Army Awards (Gold). Urban South prides itself on being strong community partners, and - with a belief that beer is a family affair - the brewery features a family-friendly taproom. For more information, please visit www.UrbanSouthBrewery.com and follow on Instagram, Facebook and Twitter for all of the latest information on events and new releases. @urbansouthbeer @urbansouth_htx