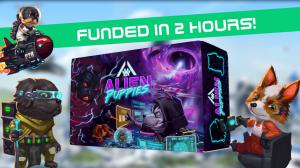 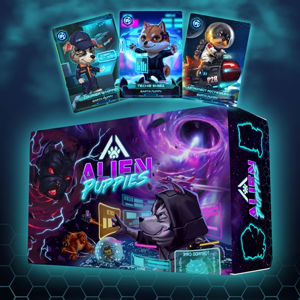 Alien Puppies, a new sci-fi card game with Cyberpunk pups, get fully funded on Kickstarter in less than 2 hours after the campaign launches.

I had a great time playing Alien Puppies. After playing one game, everyone will want to play another”— Michael Knight, GeekDad.comSAN FRANCISCO, CALIFORNIA, October 20, 2020 /EINPresswire.com/ -- Alien Puppies, a new sci-fi card game with Cyberpunk pups, gets fully funded on Kickstarter in less than 2 hours after the campaign launches.

Alien Puppies is a competitive hand management card game with elements of set collection and take that. The objective is to collect 3 Alien Puppies in your Backyard and avoid drawing the Barkmageddon card. The game is designed for 2–5 players, takes about 20 minutes to play and suitable for kids (ages 7+). A Cyberpunk Deck (ages 14+), which includes the Original Deck as well as the Cyberpunk Expansion Pack with 40 expansion cards in a bigger 2-compartment box, is also available on Kickstarter. The events of the game take place in an alternate timeline where an advanced civilization of Puppies rules the universe. The game was designed to be highly strategic, yet easy to learn and was profusely play-tested with hardcore board gamers, people who are new to tabletop games and dog lovers.


Backers are also able to vote for the dog breed characters that will be included as Kickstarter-exclusive cards that won't be available to purchase in stores, online, or at conventions.


About the creators
Piotr Hoang is a Y Combinator (YC S19) founder and mobile game developer. In 2020, he decided to build a product that would connect people offline and enter a fast-growing tabletop games market. He and his wife Kim Anh came up with the idea to create a game combining 2 of their favourite themes: sci-fi and puppies.

Cyberpunk universe
Being part of the tech startup community, Piotr felt the need to create something that portrays tech advancement in a more optimistic light and chose the Cyberpunk genre. While Cyberpunk itself usually explores darker and serious themes, there is a cool spark to it that is attractive and formed big fanbase communities (Blade Runner, Cyberpunk 2077, Snow Crash, Akira, Deus Ex, Westworld). He hopes Alien Puppies will make Cyberpunk more relatable to kids and youth with a more light-hearted theme - Cyber Pups!

Kim Anh is behind many of the design concepts and loves to imagine how the universe would be ruled by these cute futuristic puppies. Each puppy character with the corresponding powers and details hidden in the cards has a story that tells you more about the universe where dogs are the primary intelligent species and exist across the galaxies with super abilities. The world they live in is advanced technologically, with possibilities of interstellar travel.

The mechanics of the game could be compared with other games of this genre such as Exploding Kittens, Uno, Magic: The Gathering and Coup:

- Magic: The Gathering, Hearthstone and other collectible card games: Each Alien Puppy has a unique power that is activated once it enters players' Backyards - each card illustration has a premium feel of collectible cards.

- Uno: the game is easy to pick up and start playing. At times it could feel like reverse-Uno, as players need to draw more powerful cards such as Alternate Dimension, Bark, Light-speed to be in a better position to win the game and protect themselves from Barkmageddon.

- Exploding Kittens: the Barkmageddon wild card mechanic could be compared to Exploding Kittens card, and the player is forced to block it by sacrificing some cards on hand or in their Backyard. This element was incorporated to function as perfect balancer and twist to the gameplay that keeps all players on the edge.

- Coup: the game is easy to learn, yet highly strategic and replayable with bluffing and deduction elements.

For more information or to make a pledge, visit the Alien Puppies Kickstarter page.