Is Electric Vehicle Stock Workhorse Group a Buy Under $25?

By: StockNews.com
WKHS has been a public company but only gained prominence this year. The stock has had an impressive run so far this year due to the booming EV market. However, it’s had a major correction lately to trade below $25. Find out if it is time to buy the dip.

Workhorse Group, Inc. (WKHS) designs, manufactures, and sells electric, high-performance, drone-integrated electric vehicles to the last-mile delivery sector. The company’s products include medium-duty trucks comprising a powertrain and chassis. Over the past year, the company has garnered approvals from all 50 states making it the only electric vehicle (EV) delivery vehicle licenses for operation nationwide. It has recently begun the production of its C-series electric step vans. 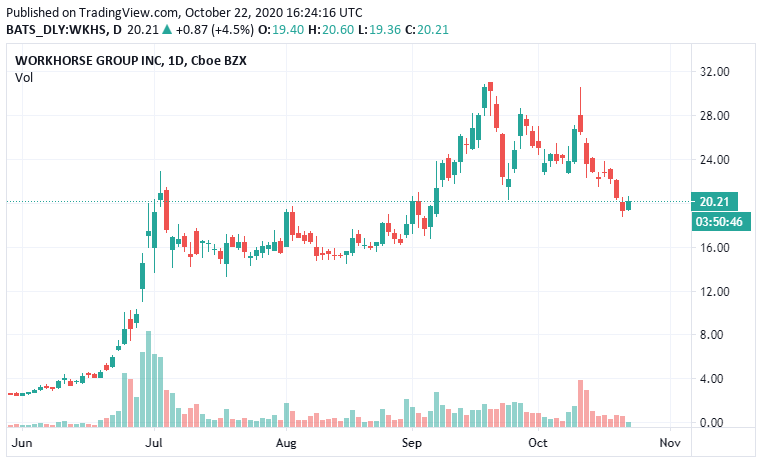 WKHS is one of the best-performing stocks this year, gaining 536.2% year-to-date. The stock gained huge momentum due to the booming EV market. Revenue for the last reported second-quarter came in $92,000, increasing 1572.7% year-over-year. WKHS is one of three finalists for a $6.3 billion worth contract to supply the US Postal Services’ (USPS) 165,000 vehicles, which could be a key catalyst driving the stock’s performance. One of the factors that favored WKSH was the company’s inclusion into the broad-market Russell 3000 Index in June. However, the company is still not earning profit and reported a loss per share of $1.76 for the quarter.

Hence, the company seems overvalued by traditional measures. Weak financials and the potential downside based on several factors have made our proprietary system to rate WKHS as a “Sell.”

Here is how our proprietary POWR Ratings system evaluates WKHS:

WKHS’s price weakness can be attributed to the recent delay in the pending decision by USPS. Moreover, the bears followed through after short-seller Fuzzy Panda Research released a scathing attack on the company. The advisor warned on October 8 that WKHS misled investors as it vies for the USPS’s contract. Fuzzy Panda claims that the company’s vehicles are plagued with issues and exceed the maximum cost guidelines. The firm also said WKHS’s one-time partner, VT Hackney, has already backed out of the bid due to ‘critical failures and breakdowns.’

In terms of proximity to its 52-week high, which is a key factor that our Buy & Hold Grade takes into account, WKHS is not positioned well. The stock is currently trading 37.6% below its 52-week high of $30.99.

Looking at the past three years, the stock gained more than 660% despite its impaired earnings. WKHS’s revenue declined at a CAGR of 70% during the same period. The company is sitting on a $2.03 billion valuation on a mere sale of $0.2 million in the trailing twelve months. There are nearly 400 WKHS vehicles on the road so far and the company expects to produce and deliver around 350 vehicles this year.

The company is also burning cash. Research and development expenditure increased 33% year-over-year to $1.6 million in the last reported quarter. Moreover, WKHS has recently gained massive liabilities and has secured $200 million from two institutional lenders to have some room for breathing.

WKHS is currently rated #9 out of 29 stocks in the Auto & Vehicle Manufacturers industry. Other popular stocks in the group are Tesla, Inc. (TSLA), Nikola Corp. (NKLA), and Toyota Motor Corporation (TM). WKHS has comfortably beaten the year-to-date return of each of these industry participants. While TM is down 3.8% so far this year, TSLA and NKLA have gained 405.2% and 115.5%, respectively, over this period.

The StockNews.com Auto & Vehicle Manufacturers industry is ranked #19 out of the 123 industries. The companies in this industry manufacture and sell vehicles such as passenger cars, light trucks, motorcycles, and more. Demand is driven by employment and interest rates. Underutilization of production plants due to lockdowns and lower auto loan generations have severely impacted the industry. However, with the EV boom, there has been growing excitement among the investors about the automotive industry going electric.

Overall, WKHS is rated a “Sell” due to its weakening fundamentals, stretched valuation, rising competition, and short-term bearishness, as determined by the four components of our overall POWR Rating.

There’s no doubt that the EV space is starting to get crowded. With the surge in the growth of e-commerce, there is a need for more cost-effective delivery vehicles. WKHS’ long-term vision is to completely solve the “last-mile” problem and yes, the company’s strategy on building electric delivery vehicles looks viable.

Analyst sentiment, which gives a good sense of a stock’s future price movement, is not favorable for WKHS. The market expects current year EPS to decline 101.2% year-over-year. This outlook should keep WKHS’ price momentum dull if the company is not able to attract new customers in the near term.

Dangerous Outlook for Stocks Into Election

About the Author: Sidharath Gupta

Sidharath’s passion for the markets and his love of words guided him to becoming a financial journalist. He began his career as an Equity Analyst, researching stocks and preparing in-depth research reports. Sidharath is currently pursuing the CFA program to deepen his knowledge of financial anlaysis and investment strategies.

The post Is Electric Vehicle Stock Workhorse Group a Buy Under $25? appeared first on StockNews.com
Data & News supplied by www.cloudquote.io
Stock quotes supplied by Barchart
Quotes delayed at least 20 minutes.
By accessing this page, you agree to the following
Privacy Policy and Terms and Conditions.