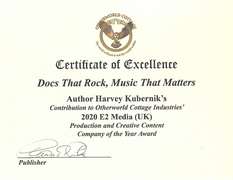 (PRLeap.com) Author Harvey Kubernik is scheduled to be the feature interview subject on the Monday, November 30th edition of the "Feedback" satellite radio program on the SiriusXM music talk channel Volume hosted by Nik Carter & Lori Majewski. Kubernik phones in at 6:20 am (PST) to discuss his Otherworld Cottage Industries title, "Docs That Rock, Music That Matters."

Meanwhile, BEST CLASSIC BANDS - CELEBRATING THE ARTISTS, MUSIC AND POP CULTURE OF THE CLASSIC ROCK ERA, in its 2020 Review: The Best Music Books of the Year lists "Docs That Rock, Music That Matters" by Harvey Kubernik. "Here is the 'real-to-reel backstory' behind many of the music DVDs and documentary films you have on your shelves and in rotation in your home library. This book includes dialogues with acclaimed Oscar winners including D. A. Pennebaker, Murray Lerner and Albert Maysles."

And if you missed the Mike Stax review in the November/December issue of Ugly Things magazine, you may read the entire review at https://otherworldcottageindustries.com/UT55 Docs That Rock Review, page 28.pdf.

Harvey's "Docs That Rock, Music That Matters" is also the subject of a recorded 90-minute podcast interview with Goldmine magazine Editor Pat Prince.

TheNovember/Decermber issue of Record Collector News magazine spotlights a cover story by Harvey Kubernik on the "wizard of Laurel Canyon," Frank Zappa, and examines the November 27th release of "ZAPPA," a documentary film from Magnolia Pictures by Alex Winter. The magazine's coverage features Harvey's interview with actor/director Winter about his marvelous and inspiring movie.

An extended version of the "ZAPPA" article can be read at https://www.musicconnection.com/kubernik-qa-with-zappa-director-alex-winter/, currently proudly displaying Harvey's multi-voice narrative tribute to George Harrison's epic "All Things Must Pass," which celebrates a 50th anniversary on November 27th.November. Other October and November 2020 Kubernik-penned articles and his work in television and on film may also be viewed on cavehollywood.com or by visiting Kubernik's Korner.

Harvey received his Certificate of Excellence because "Docs That Rock, Music That Matters" was a contributing factor in Otherworld Cottage Industries winning a 2020 E2 Media (UK) Production and Creative Content Company of the Year Award. To learn more about it, or all the other awards Otherworld Cottage won this year, visit its International Newsroom.

You can see the original version and more on PRLeap here: http://www.prleap.com/pr/278409/harvey-kuberniks-19th-boook-docs-that-rock-music-that-matters-continues-to-make-waves