It has been an invigorating year for autonomous vehicle stocks so far. Why do I say that? That’s because self-driving technology has been one of the hottest investing themes on Wall Street in recent years. Autonomous vehicles (AVs) or self-driving cars bring a unique dimension of transportation to the table. In terms of benefits, it could improve road safety and offer convenience for users. According to a study conducted by the Center for Disease Control and Prevention, crash injuries are estimated to be the eighth leading cause of death globally. If we were able to switch to autonomous driving overnight, we would save more than 1 million lives per year globally.

From a macro perspective, the newly emerging shift of transportation to AV has started to catch the attention of many investors in the stock market today. With so many big players entering the industry, it’s no wonder why investors are excited about being a part of the current autonomous vehicle craze. Though we still remain in the early stages of the AV industry, let’s take a look at five of the top autonomous vehicle stocks to watch in the stock market right now.

First, up the list, we have Microvision. It is a company that pioneers laser beam scanning technology. The company specializes in lidar systems, which use laser beams to form three-dimensional images of the surveyed surroundings. Hence, creating a real-time map of the environment. So, the idea is to have onboard computers utilize this to help navigate self-driving vehicles. The company’s stock has surpassed all expectations over the past year. A year ago, it was still considered a penny stock but it has since risen by leaps and bounds, with MVIS stock surging more than 300% year-to-date. 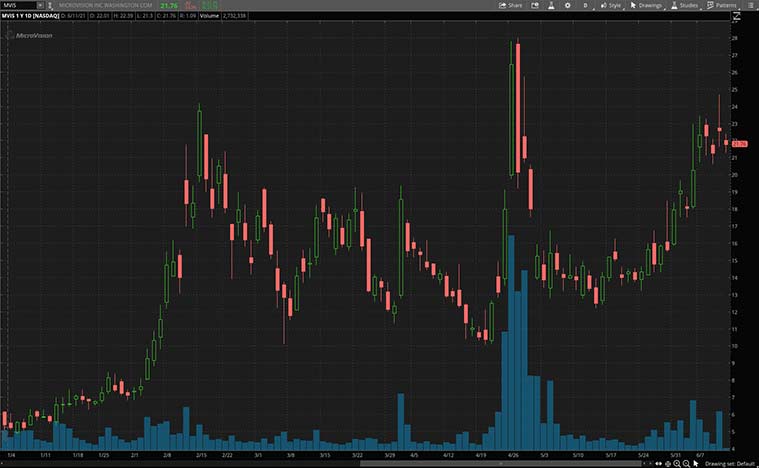 Of course, MVIS stock is also a popular meme stock trending in the subreddit r/wallstreetbets. And that explains the company’s recent momentum. Another possible explanation for the surge in stock price is the stock’s inclusion in the Russell 2000 Index. Despite the company’s underwhelming first fiscal quarter in which sales fell 67% and net losses widened, the company’s bet on lidar could pay off really well should it be able to have an automotive deal. But with MVIS stock’s recent social media fame, would you ride on its momentum or wait until the dust settles?

Next up, Ambarella is a computer vision (CV) chip designer. Its computer vision technology is useful in self-driving vehicles, providing help with blind-spot visual detection. The company has been riding on the bullish momentum in the space after positive progress in its CV chip development. This is especially prominent among automakers where tens of millions of cars could potentially benefit from the advanced driver-assist functions made possible from its CV chips. 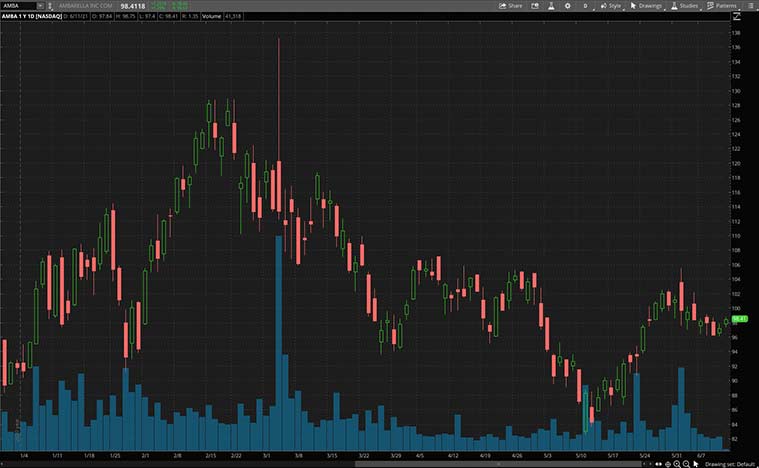 The CV chip designer made a nice comeback in its first-quarter fiscal after a 3% tumble in full-year sales last year. From the fiscal report, revenue came in 28% higher to $70.1 million, topping analyst estimates as the auto industry quickly recovered. Adjusted net income also came in 575% higher to $8.92 million. And more importantly, the management’s outlook for the second quarter is particularly encouraging, where revenue is expected to be 51% higher year-over-year in the coming quarter. With improving fundamentals and the high potential of the AV technology, is AMBA stock worth an addition to your watchlist today?

One of the traditional automakers trending lately is General Motors. GM stock price had another boost this month after the company raised its profit outlook. If anything, this indicates that GM is achieving greater ability in acquiring chips and allocating them among its model lines. The Detroit automaker also expects first-half profit to be “significantly better” than previously forecast. This is due to the success of shifting scarce semiconductors to boost the production of highly profitable trucks in the North American market. 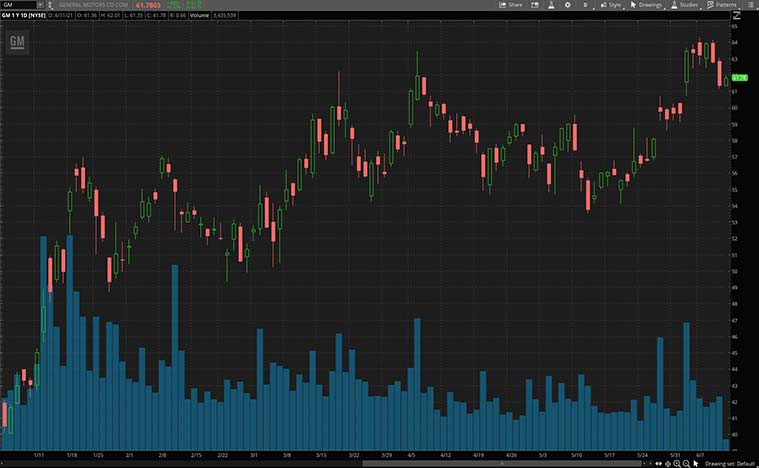 If you’re new to the space, General Motors is one of the first few traditional automakers to make huge investments in autonomous vehicle technologies. One of its subsidiaries, Cruise, may soon be giving rides in driverless test vehicles to passengers in California. Notably, Cruise had raised billions of dollars from strategic backers including Microsoft (NASDAQ: MSFT) and Walmart (NYSE: WMT). With General Motors firing on all cylinders in the AV and EV market, wouldn’t it make sense to load up on GM stock right now?

Coming up next, we have a leading tech company that dominates the graphic processing units (GPU) market, Nvidia. For those unfamiliar, the company designs GPUs for the gaming and professional markets. Also, it manufactures system-on-a-chip units for the mobile computing and automotive markets. Nvidia has researched autonomous driving technologies for several years, providing a scientific basis for its latest venture. Its main role in AVs is its NVIDIA DRIVE AGX Orin, a highly advanced software-defined platform for autonomous vehicles and robots. Orin will be targeting automakers’ 2022 production timelines. The company’s stock is just as exciting as its products, showing gains of over 20% over the past month. 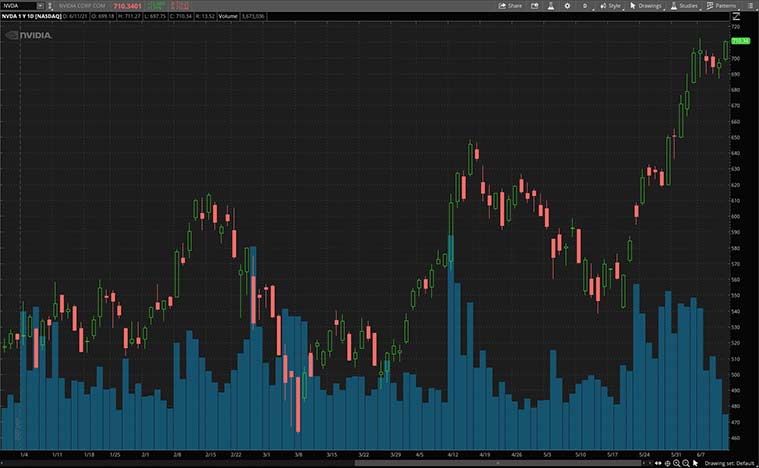 In March, self-driving truck company Plus announced that its upcoming AV platform will be built on NVIDIA DRIVE Orin. Plus plans to roll out the platform in 2022 and has already received more than 10,000 pre-orders. On top of that, Nvidia also revealed its next-generation AI-enabled processor for AVs, NVIDIA DRIVE Atlan, in April. It allows automakers to build software-defined vehicles that are programmable and upgradeable through secure, over-the-air updates. This will be for vehicles with 2025 production targets and beyond. Therefore, with such exciting developments surrounding the company, would you consider buying NVDA stock?

XPeng Inc is a China-based company that engages in the design, development, production, and sales of smart EVs. The Company’s primary products are environmentally friendly vehicles, namely an SUV (the G3) and a four-door sports sedan (the P7). The Company aims to develop full-stack autonomous driving technology, in-car intelligent operating systems, and core vehicle systems in-house through its proprietary software, core hardware, and data technologies. 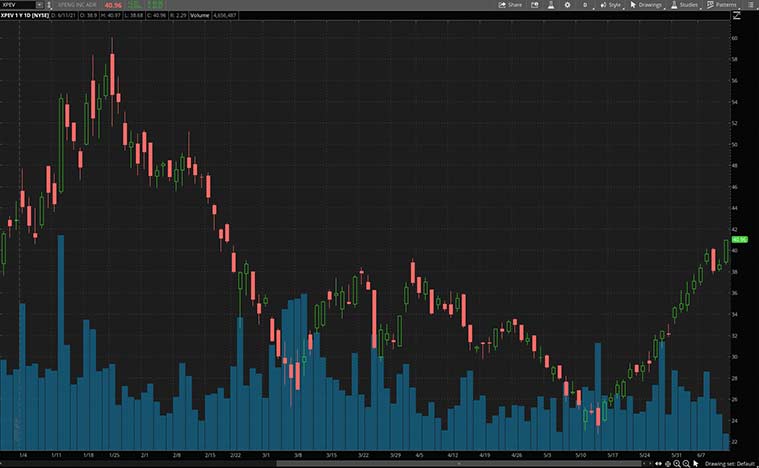 If you’re looking for autonomous vehicle stocks to bet on the world’s largest new-energy vehicle market, look no further than XPeng. From its May delivery update, XPeng delivered a total of 5,686 Smart EVs. This represents a 483% increase year-over-year. Out of which, 3,797 consisted of P7s, and 1,889 were the G3s. That demonstrates the strong customer appeal of XPeng’s market-leading smart features. Given its advanced technologies coupled with strong delivery numbers, would you agree that XPEV stock is a top autonomous vehicle stock to buy right now?