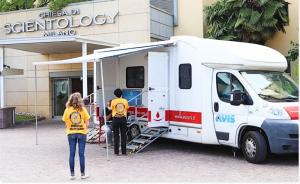 According to World Health Organization, “Safe blood and blood products and their transfusion are a critical aspect of care and public health. They save millions of lives and improve the health and quality of life of many patients every day. The need for blood is universal, but access to blood for all those who need it is not. Blood shortages are particularly acute in developing countries.”

With the theme, “a gesture of love that saves lives,” more than 100 Scientology Volunteer Ministers took part in a blood drive for AVIS—Italy’s Association of Voluntary Blood Donors (Associazione Volontari Italiani del Sangue).

Launching in Rome June 12, the drive visited Scientology Churches, Missions and groups in Florence, Viareggio, Brescia, Monza, Novara, Bologna, Como, Ravenna and Pordenone, with a final stage June 30 in Milan. Another team in Cagliari, the capital of Sardinia, also took part in the project. In Rome and Milan, an AVIS mobile blood donation center was set up at the Church of Scientology. Volunteers donated blood at the local AVIS centers in the other cities.

In addition to the June blood drive, Italian Scientology Volunteer Ministers have helped their communities by providing urgently needed service throughout the pandemic. They set up and manned help lines and delivered food and prescriptions to ill and elderly neighbors who were quarantined at home. They disinfected healthcare centers, churches and public facilities.

Volunteer Ministers from every Scientology Church and Mission in Italy distributed thousands of copies of educational booklets to local businesses and door-to-door to ensure their communities understood and could implement effective prevention protocols to keep themselves and their families well.

The Church of Scientology Volunteer Ministers program is a religious social service created in the mid-1970s by humanitarian L. Ron Hubbard.

A Volunteer Minister’s mandate is to be “a person who helps his fellow man on a volunteer basis by restoring purpose, truth and spiritual values to the lives of others.” Their creed: “A Volunteer Minister does not shut his eyes to the pain, evil and injustice of existence. Rather, he is trained to handle these things and help others achieve relief from them and new personal strength as well.”

For more information, visit the interactive timeline on the Scientology website at www.Scientology.org/20-21

The Founder of the Scientology religion is L. Ron Hubbard and Mr. David Miscavige is the religion’s ecclesiastical leader.