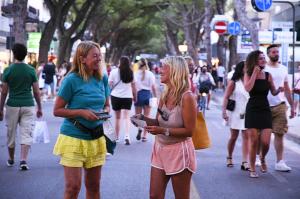 In her signature teal Drug-Free World T-shirt, a volunteer from a nearby Scientology Church reaches out to those enjoying the freedom of spending the day without COVID restrictions in the popular beach town of Jesolo, Italy. 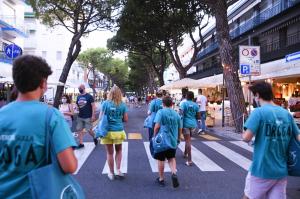 The volunteers brought their Truth About Drugs campaign to the popular beach resort to share fact-based booklets about the most commonly abused drugs. 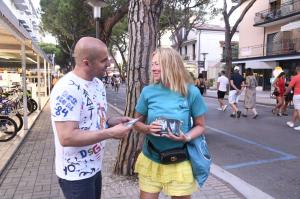 Drug-Free World volunteers are committed to providing fact-based drug education to help others avoid the tragedy of drug abuse and addiction. 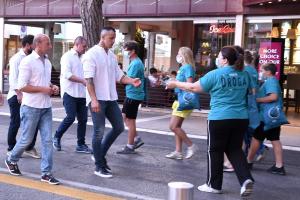 Volunteers reach out with the Truth About Drugs

With the country finally open to tourism, Scientology volunteers bring the Truth About Drugs campaign to Jesolo, a popular Northern Italian seaside resort.

JESOLO, ITALY, July 11, 2021 /EINPresswire.com/ -- Less than an hour from Venice is one of the most popular and beautiful seaside towns in Italy. A favorite holiday resort on the Adriatic for locals and tourists, Jesolo also has a reputation as a party town.

It was here that volunteers from a nearby Scientology Church launched their annual drug prevention campaign June 26 on International Day Against Drug Abuse and Illicit Trafficking.

Aware of the increase in drug overdose deaths in Italy in the height of the pandemic, Drug-Free World volunteers reached out to those relaxing in the beach town with factual information on the most commonly abused substances.

The popularity of the Truth About Drugs initiative is based on its effectiveness. Its booklets, PSAs and documentary communicate the reality of drug abuse in terms anyone can relate to. Because those presented with the unvarnished facts about drugs are far more likely to reject them on their own, Truth About Drugs is a favorite educational tool in nations across the globe.

The award-winning Truth About Drugs initiative:

* Is available in 26 languages.

* Its public service announcements and The Truth About Drugs—Real People, Real Stories documentary air on the Scientology Network and on 850 TV stations.

* More than 135,000 people have completed the free online drug education eCourse on the Foundation for a Drug-Free World website at www.drugfreeworld.org/course.

* The Foundation has reached some 13 million students through more than 30,000 schools, institutions and groups that use the Truth About Drugs curriculum.

To make these materials available to anyone wishing to tackle the drug crisis, the Church of Scientology International Dissemination and Distribution Center in Los Angeles, California, produces and ships out Truth About Drugs booklets, DVDs and education packages free of charge to parents, educators, law enforcement, community groups and nonprofits.

Scientology Churches around the world sponsor Drug-Free World chapters, host drug prevention open house programs, and reach out to their communities with the Foundation’s The Truth About Drugs series of fourteen illustrated drug information booklets containing facts about the most commonly abused drugs.

The Founder of the Scientology religion is L. Ron Hubbard and Mr. David Miscavige is the religion’s ecclesiastical leader.