By: StockNews.com
Silver (SLV) has underperformed for nearly a year despite low rates and rising inflationary pressures. It seems that silver is trading like inflation will be transitory. Taylor Dart explains why silver needs to rally soon.

While the S&P-500 (SPY) has easily shrugged off its mid-month weakness, the precious metals have been unable to reverse course, continuing to hover near their recent lows, with silver (SLV) slightly weaker than gold (GLD). This underperformance continues to weigh on sentiment for the precious metals, with bullish sentiment for silver plunging to nearly 20%, an area where we have seen buyers step up in the past. The slightly negative development, though, is that this recent weakness is beginning to weigh on the gold/silver ratio, and we do not want to see this ratio climb above 80, which would be a change of character. Given that silver continues to remain above its yearly breakout with no breakout yet in the gold/silver ratio, I continue to remain bullish. Let's take a closer look at the bull and bear case below:

As shown in the chart above, bullish sentiment for silver has slid significantly from February levels, down from a reading of 90% bulls when a herd of investors was briefly convinced that WallStreetBets was going to corner the silver market. Given the Hunt Brothers' lack of success in this same endeavor, it should have been quite obvious this wasn't likely to work, and the price has retreated considerably since. The good news is that this 18% correction in SLV has taken a massive bite out of sentiment, with bullish sentiment falling 6500 basis points in 4 months, from 90% bulls to barely 20% bulls. While low readings on sentiment do not guarantee bottoms, they do create the conditions for bottoms to be formed, and we typically see buying support on any further weakness. This suggests that sentiment has finally tilted in favor of the bulls, and we have entered a low-risk buy zone for a starter position in silver. 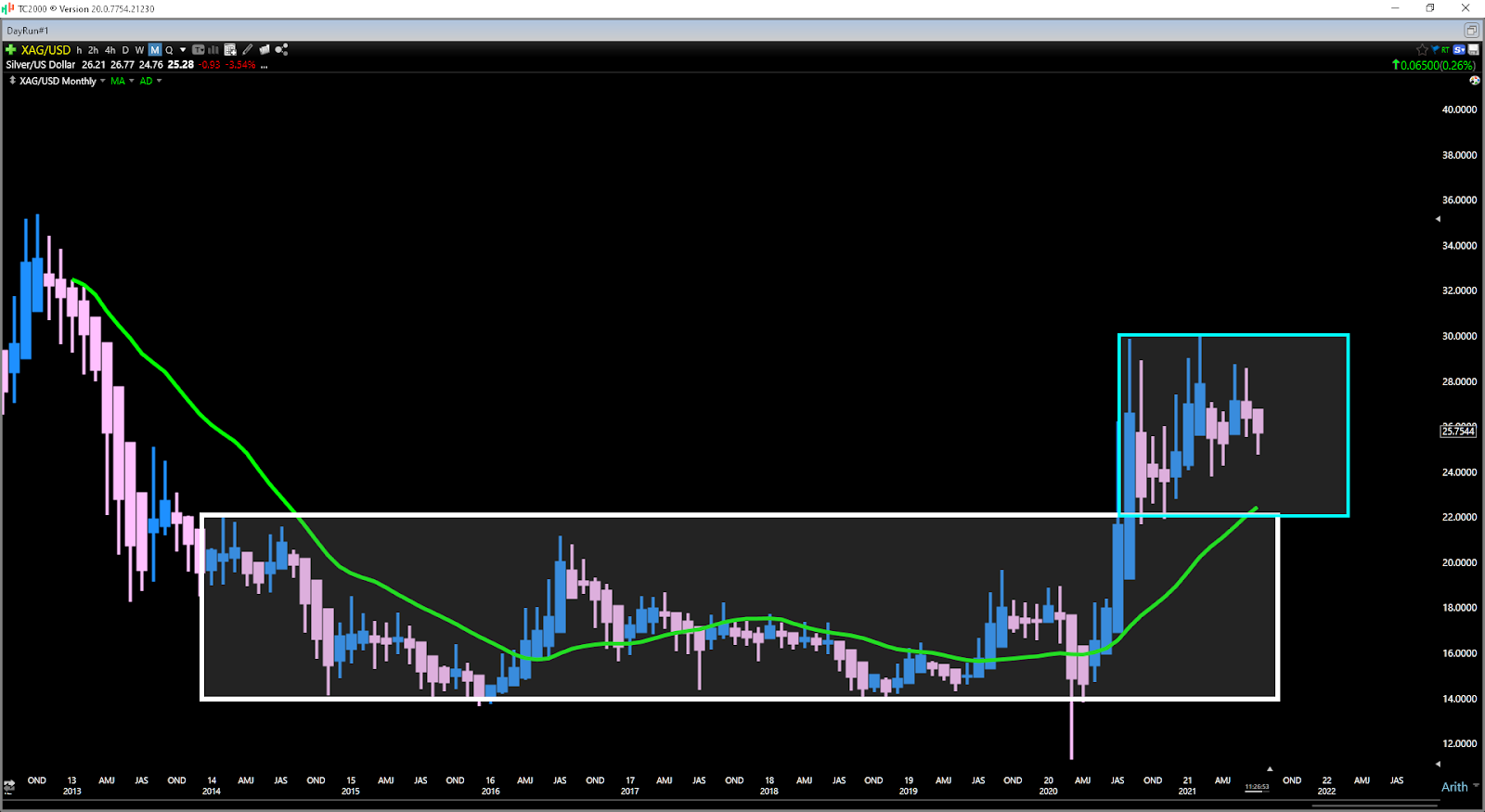 If we move to the monthly chart, we can see that silver continues to trade in a base-on-base pattern and remains above its monthly moving average (green line) and its yearly pivot. The fact that we have three bears for every one bull in silver despite this bullish posture on the long-term chart is a positive sign, suggesting that investors are too focused on the short-term and being worn down by the recent price weakness. From a technical perspective, as long as silver can remain above $22.00/oz, I don't see any reason to become bearish. Notably, the monthly moving average, which is typically a floor and ceiling during bull and bear markets, is catching up to silver. This should provide a floor for the metal near $23.00/oz if weakness persists. 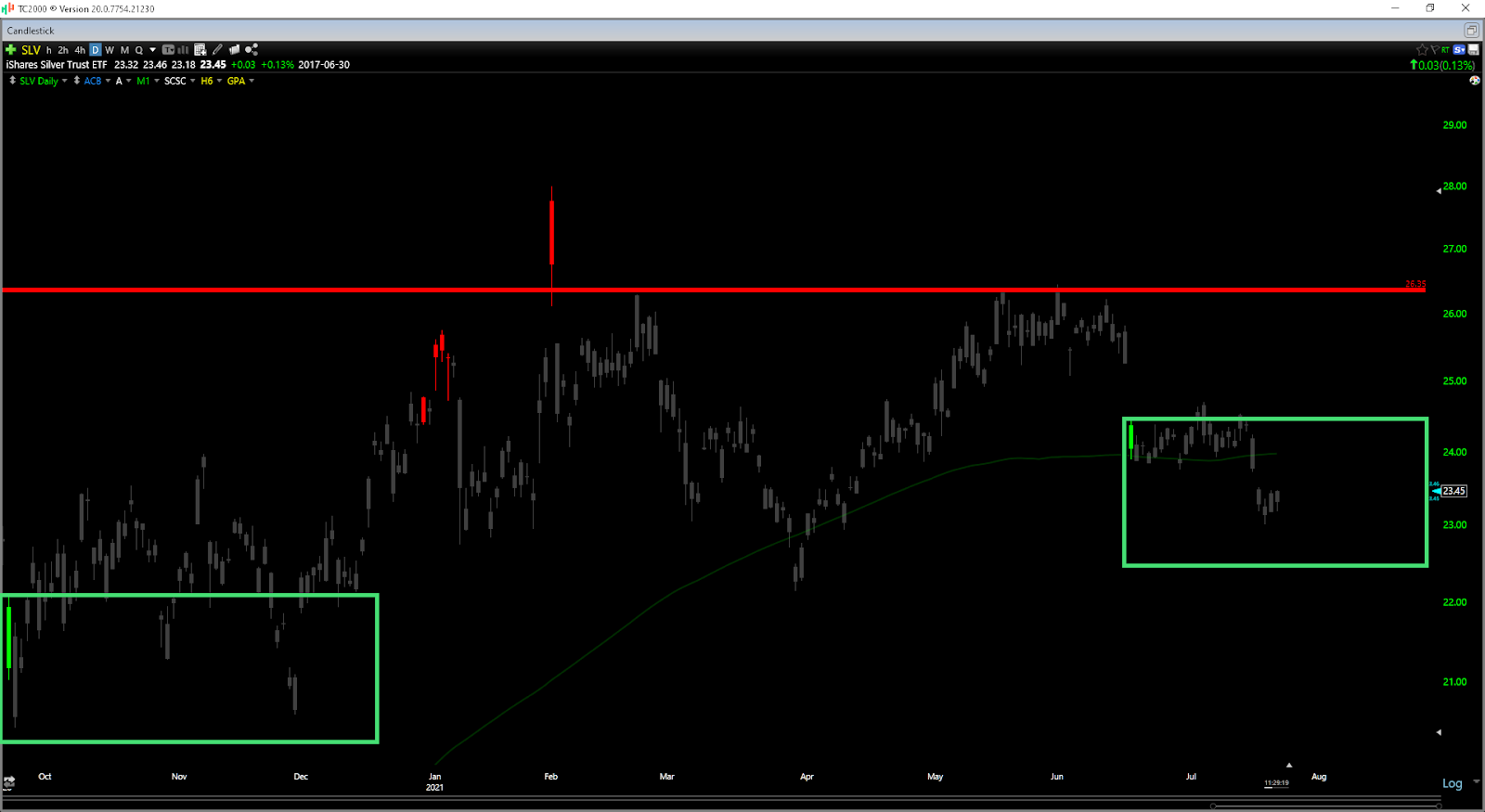 Finally, if we look at a short-term chart of silver, we can see that SLV registered its second buy reading in the past 12 months in late June near $24.00 and is inside the 10% box buy zone following this oversold condition. Silver briefly traded lower by 6% from its buy signal during the September reading but held within its buy zone and rallied more than 15% from its buy signal over the following 65 trading days. Obviously, history doesn't need to repeat itself, but silver would re-test its highs near $30.00/oz before year-end if this were to play out similarly. So, for investors looking for a low-risk entry into the metal, it's finally arrived.

While I generally prefer gold to silver, given that gold is less volatile, this sharp correction in silver should be welcomed by investors as long as they were patient enough to wait for a dip to start new positions. This is because the gold/silver ratio is still on a bullish reading which is positive for precious metals, sentiment is in the dumps short-term, and the metal has finally dropped into a low-risk buy zone. While further short-term weakness is possible, I have recently started a position in SLV and continue to hold, with a view that we should re-test resistance near $29.00/oz within the next four months.

Disclosure: I own SLV, GLD

The post Silver: Time For Bulls To Play Defense appeared first on StockNews.com
Data & News supplied by www.cloudquote.io
Stock quotes supplied by Barchart
Quotes delayed at least 20 minutes.
By accessing this page, you agree to the following
Privacy Policy and Terms and Conditions.