Here's Why You Should Keep Buying the Dips in Silver

By: StockNews.com
Silver was down 3% in July. However, Taylor Dart believes investors should keep a bullish bias due to negative real interest rates and increasing demand from renewable energy sources.

It’s been a volatile stretch for the price of silver (SLV) recently despite the gold (GLD) holding strong, with silver down 3% for the month of July, while gold enjoyed a 3% return. This bifurcated performance is surprising during a bull market and likely bucked many silver bulls out of their positions. This is because, as of last week’s lows, silver had dove more than 13% in barely 30 trading days, giving up all of its gains following its swing low in late March. Given the backdrop, which remains very bullish for silver with negative real rates and a demand tailwind from renewable energy, the poor price action has caused concern among investors, with this clearly showing up in recent sentiment readings. Let’s take a closer look below:

Since the February spike, the silver ETF (SLV) had slid over 18%, and with hopes of the metal hitting $30.00/oz before year-end drowned out by despondence, we’ve seen a massive shift in sentiment. As shown in the chart above, bullish sentiment has slid from a high of 78% in February to a low of 40% in mid-April and is now looking to re-test the 40% level if the lack of enthusiasm for the trade continues. As of last Friday, bullish sentiment remained below 30% on a short-term basis, briefly dipping to 25%, suggesting that there were three bears for every one bull in the trade. For an asset that is up more 34% in the past year and 125% since the March lows, this is a significant level of bearish sentiment. Notably, the 40% level has been an area where sentiment has reversed on three separate occasions in the past two years, with silver finding a bottom shortly after. Therefore, if this pessimism continues, we will see sentiment move to a contrarian buy signal before month-end. 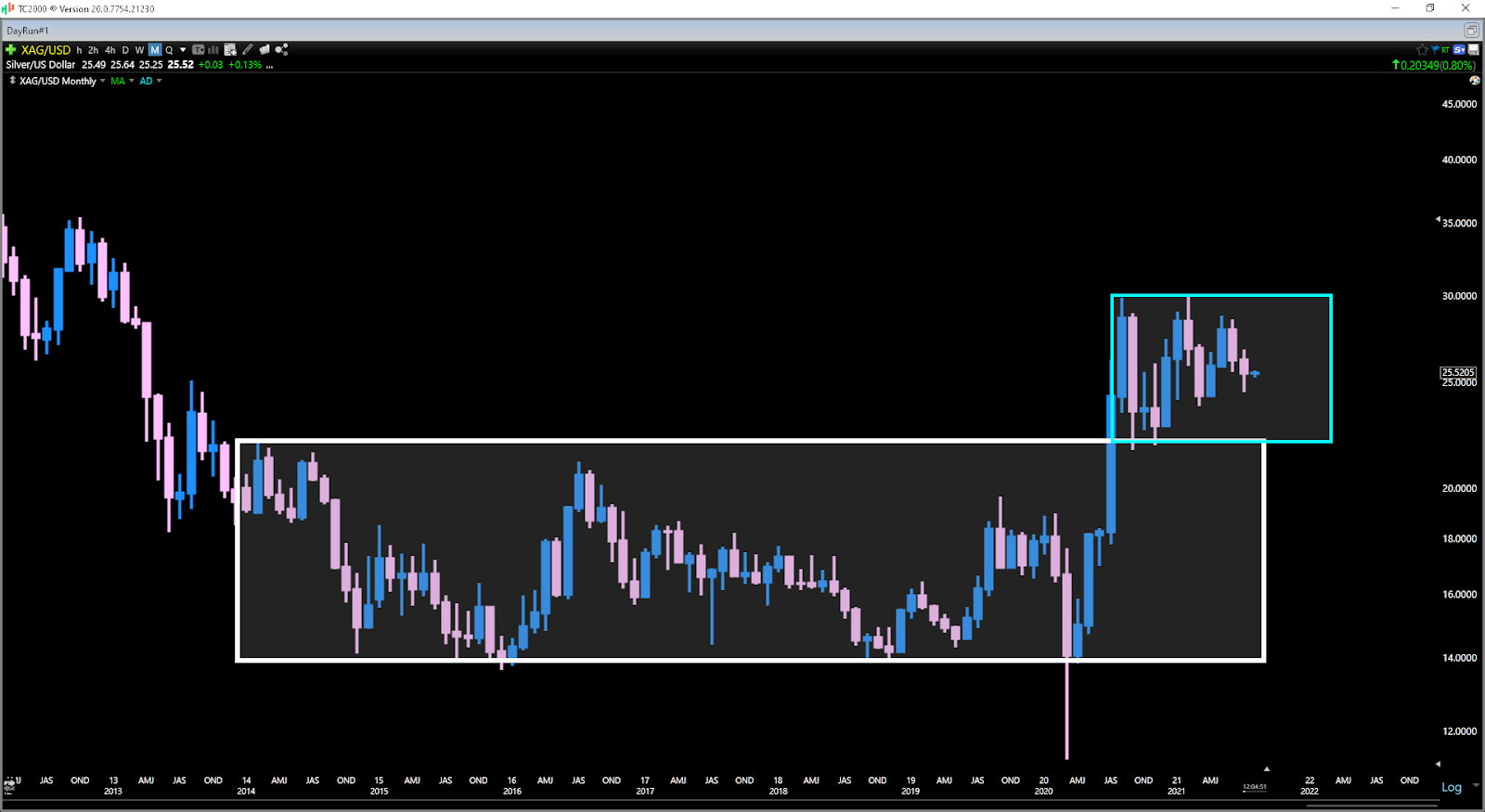 While disgust for a market or asset class often leads to bottoms, the most attractive setup from a sentiment standpoint is when the majority turn bearish while an asset class is still in an uptrend. As is clear from the long-term chart of silver below, we continue to have a trend of higher highs and higher lows, and the metal is also sporting a multi-year breakout. It’s clear a period of stagnation with minimal upside progress has led to underperformance, but to suggest we have significant technical damage would be incorrect. Instead, we have an asset that broke out of a multi-year base and is now consolidating and looking for direction, a completely normal event. As it stands, there’s no guarantee which way silver will move following its consolidation, but if history were to repeat itself, the breakout would be to the upside, with a very similar setup occurring in 2004-2005 for the price of silver. The key to confirming a breakout will would  be a monthly close above $30.00/oz. 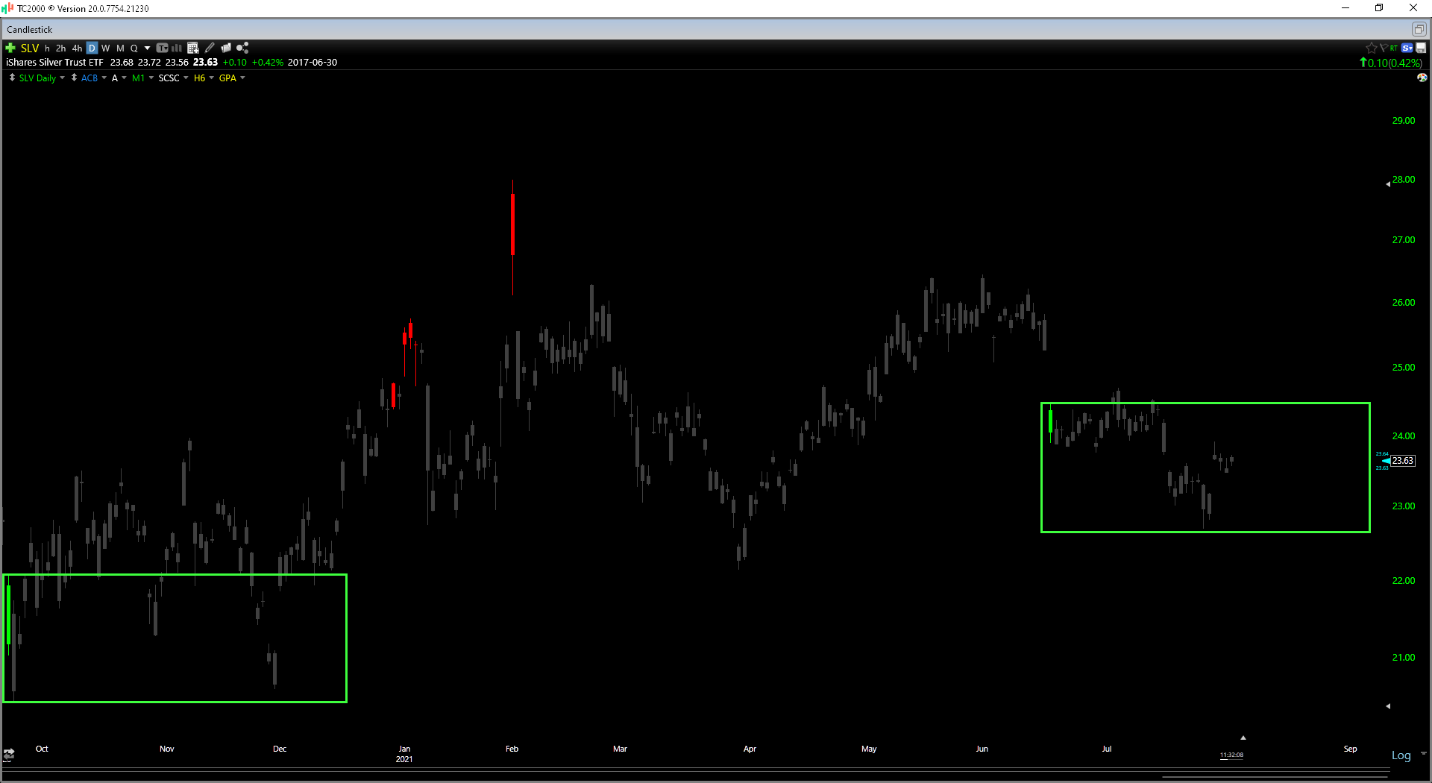 If we look at the technical picture from a shorter-term basis, we can see that silver recently moved onto a buy signal at $24.00 on SLV and saw a sharp drawdown shortly after. This is similar to what we saw in September following a violent decline, with silver often seeing a lower low after becoming oversold. The good news, for the time being, is that silver has held within its 10% box range after registering its buy signal, and buyers have stepped up as of late last week. So, assuming the SLV holds the $22.50 level, I see no reason to believe that this oversold buy signal will fail. Based on past precedent, silver has typically gained at least 13% over the following four months from similar buy signals, which would translate to a move towards $27.00 SLV before year-end.

It’s easy to be pessimistic on silver after several months of volatile price action, but with the metal continuing to outperform gold and remaining above a massive breakout, I don’t see any reason to lose sight of the bigger picture. This big picture suggests that new highs are likely on deck within the next nine months and that the $29.00/oz could eventually become new support rather than resistance currently. For this reason, I continue to see SLV as a buy on any sharp dips, and I would view dips below $23.00 on SLV as low-risk buying opportunities.

Disclosure: I am long GLD, SLV

The post Here's Why You Should Keep Buying the Dips in Silver appeared first on StockNews.com
Data & News supplied by www.cloudquote.io
Stock quotes supplied by Barchart
Quotes delayed at least 20 minutes.
By accessing this page, you agree to the following
Privacy Policy and Terms and Conditions.