3 Gold Miners to Buy on Dips

By: StockNews.com
Gold miners have underperformed the market so far this year. However, Taylor Dart believes it could be an opportunity to buy shares of high-quality companies like Kirkland Lake Gold (KL), B2Gold (BTG), and Agnico Eagle Mines (AEM).

It’s been a rough start to August thus far for the Gold Miners Index (GDX), with the ETF sliding 9% in the last ten trading sessions. This has pushed the ETF into deeply negative territory for the year, with many poorly operated names dragging down the index. Given gold’s (GLD) poor performance as an inflation hedge in a clear inflationary environment, many investors have finally begun to throw in the towel on both miners and gold. This has created an opportunity for those looking for exposure to the sector. In this update, we’ll look at three names that are top buy-the-dip candidates among the sector-wide carnage: 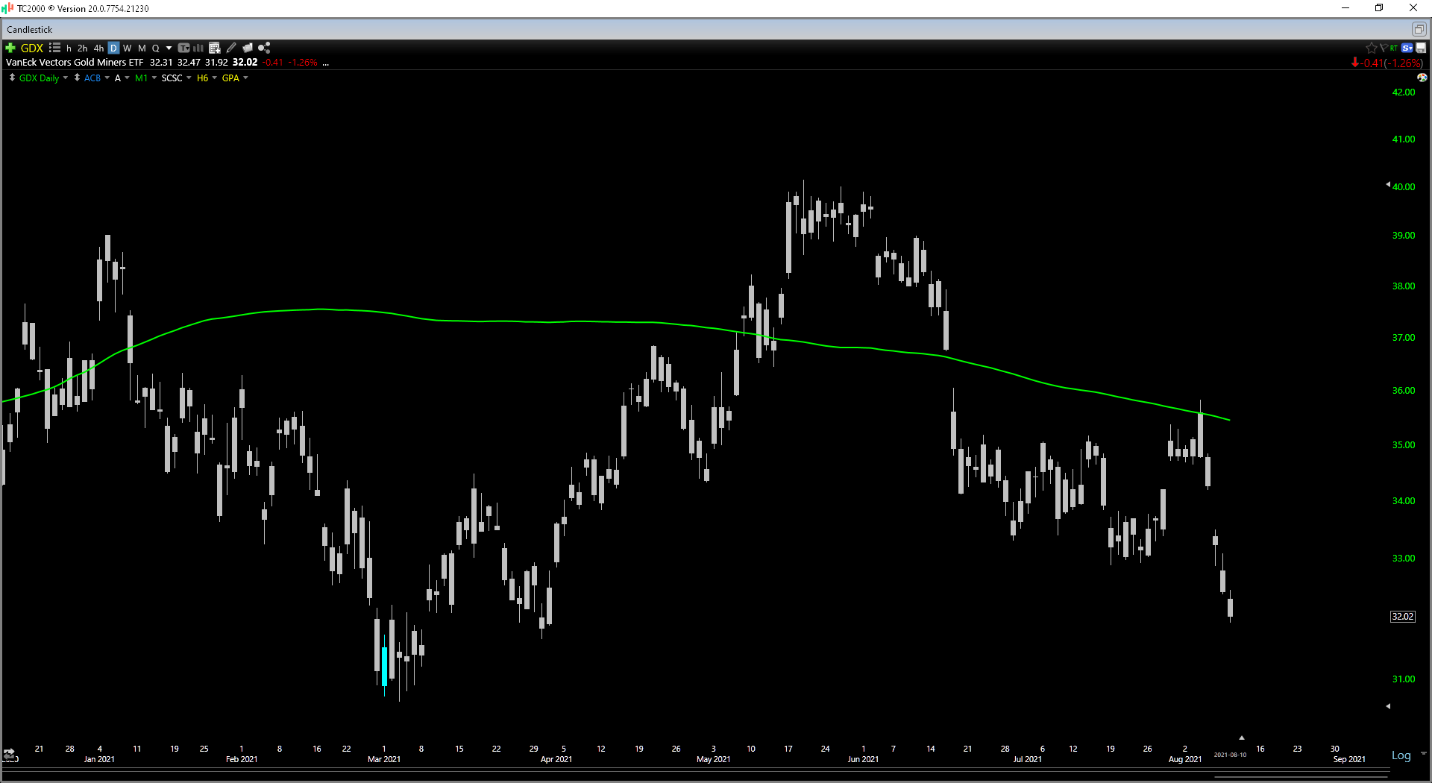 The favored way for investors to get exposure to gold is through the Gold Miners Index, but the issue is that investors are also exposed to the dogs of the sector and get a much lower yield. These under-performers weigh on the GDX’s performance, and with the GDX owning over 50 names, it’s bound to hold several names with major operational and financial issues. This is why I prefer investing in individual miners. However, the key is to focus on the highest-quality names with the best business and be disciplined enough to wait for the right price. With three top miners now paying dividend yields of 2% or higher and trading at double-digit earnings yields, now looks like the time to begin starting new positions in names like Kirkland Lake Gold (KL) and B2Gold (BTG) and monitor for further weakness in Agnico Eagle Mines (AEM). Let’s take a closer look at the three companies below:

Beginning with the one mid-cap name on the list, B2Gold, the company has had a slow start to FY2021 thus far, producing just ~432,300 ounces of gold, down from more than 490,000 ounces in H2 2020. The decrease in output has been driven by lower grades at its flagship Fekola Mine and its Otjikoto Mine, with the company focused on waste stripping at both mines to develop new mining areas. The good news is that despite the slow start to the year, the company has maintained its production of 1MM ounces for FY2021, suggesting that we will see a significant back-half weighting for output, with mining transitioning to higher-grade zones. Notably, the company also held its cost guidance at $890/oz, translating to some of the highest margins in the industry.

While there are safer bets in the sector than B2Gold, given that it owns just three mines and two are located in Africa, it’s hard to find million-ounce producers trading at similar valuations. This is because B2Gold currently trades at just 8x FY2022 earnings estimates at a share price of $3.85 while paying a quarterly dividend of $0.04. This translates to a more than 12% earnings yield and a dividend yield of more than 4.00%, and this earnings yield is based on a gold price of $1,775/oz. This means that if the gold price can recover and average between $1,850/oz - $1,900/oz, B2Gold could earn more than $0.52 and trade at an earnings multiple of closer to 7. This is a significant margin of safety, making the stock an attractive bet after this nearly 50% correction since last August.

The second name on the list is arguably the most undervalued miner in the sector, with Kirkland Lake Gold trading well below its historical PE range of 12 to 24. This downgrade in the stock’s earnings multiple is due to an acquisition of a lower-grade asset in Canada (Detour Lake), which pushed the company’s all-in sustaining costs up from below $600/oz to $800/oz. However, even with a cost profile of $800/oz, KL is the lowest-cost million-ounce producer in the sector by a wide margin, with 50% AISC margins even at a conservative gold price of $1,600/oz. During the most recent quarter, KL trounced estimates, beating revenue by more than $15MM, quarterly EPS by $0.05, and producing significantly more gold than planned. While this was partially due to mine sequencing and mining a higher-grade zone at its Australian asset, it was also due to grade outperformance and another solid quarter from its new Detour Lake Mine.

As shown above, KL will see annual EPS slow considerably beginning in FY2021, with just 19% growth in annual EPS between FY2020 and FY2023 ($4.02 vs. $3.38). This pales in comparison to high double-digit and even triple-digit annual EPS growth in the past five years and can be attributed to KL’s higher share count after acquiring Detour  Gold. However, with a 5% buyback program in place and KL sitting on over $800MM in cash, the company could repurchase as much as 5% of its float this year alone without putting a significant dent in its cash balance after factoring in H2 free cash flow generation of more than $300MM. I would expect this to translate to a massive beat on FY2023 annual EPS estimates, with KL likely to benefit from a much lower share count and at least 12% higher gold production.

The other major catalyst worth noting is a new mine plan at Detour Lake due in Q1 2022, which should prove that the asset has the ability to stay in production looking out to 2050. This would make it one of the longest-life assets in a Tier-1 jurisdiction and make KL a very attractive takeover target for the largest miners in the sector that are hungry to replace ounces. Despite this bullish outlook, KL trades at just 11x FY2022 earnings estimates and pays a 2.0% yield. Based on what I believe to be a fair earnings multiple of 15, my 18-month target price continues to sit more than 50% higher at $60.30 per share. Therefore, I see the stock as a steal at $39.00.

The final name on the list is Agnico Eagle Mines, one of the world’s largest producers and the largest producer globally operating out of solely Tier-1 jurisdictions (except for 8% of revenue from Mexico). AEM reported revenue of $966MM in its most recent quarter, a 73% increase year-over-year. Meanwhile, quarterly EPS soared to $0.69, up 283% year-over-year. This was driven by higher output and higher metals prices, with the company lapping disruptions from COVID-19 in the year-ago period. However, while the easier year-over-year comps helped, it was still a record quarter from an output standpoint when including Hope Bay. In total, Q2 output came in at ~526,000 ounces, with outperformance from Malartic, Meadowbank, and LaRonde.

Given AEM’s position as the largest gold producer operating out of Tier-1 jurisdictions with significant asset diversification (10 mines),  it’s no surprise that the stock trades at a premium to its peers. However, with FY2022 annual EPS estimates of $3.42 and a share price of $59.00, I still don’t see a meaningful margin of safety just yet. In order for the stock to have a large enough margin of safety, it would need to dip below $55.00, where it would trade at less than 16x FY2023 earnings estimates. So, while I think AEM is a top-5 name to keep on one’s shopping list in the sector, I would be waiting for further weakness before starting a position. There’s no guarantee the stock dips this low,  but with KL offering Tier-1 exposure at higher margins with a similar yield, I see this as the better value currently relative to AEM.

It’s been a terrible 9-month stretch for the Gold Miners, and understandably, many investors have thrown in the towel on the trade. This has created an opportunity for those that have been patiently stalking the miners for a low-risk setup, because many miners are now trading at their most attractive valuations in years. Obviously, fundamentals alone don’t mean these stocks have to bottom, but with BTG and KL trading at PE ratios of 11 or lower with yields of 2.0% - 4.2%, it looks like time to nibble on these names especially with sentiment in the toilet. For now, I remain long KL, which I rate as a Strong Buy, and I may look to start a position in BTG later this month if we see further weakness.

Disclosure: I am long GLD, KL

The post 3 Gold Miners to Buy on Dips appeared first on StockNews.com
Data & News supplied by www.cloudquote.io
Stock quotes supplied by Barchart
Quotes delayed at least 20 minutes.
By accessing this page, you agree to the following
Privacy Policy and Terms and Conditions.