4 Trending Penny Stocks On Robinhood You Should Watch Right Now

By: Penny Stocks to Buy, Picks, News and Information | PennyStocks.com - Feed
Are These Robinhood Penny Stocks On Your List Today?

When you think about penny stocks, what first comes to mind? Is it a company with a wild business model that could become a huge success in the future? Or is it something more along the line of some 3, 4, or 5 letter symbol that is the latest focus across social media? Neither answer is wrong and knowing how to handle both types of “penny stocks” is important, especially if you want to make money consistently.

In the stock market today, sentiment is becoming a key driver of momentum. This is where you’ll see some of the cheapest stocks shoot up big without any apparent reason. Usually, a mix of heavy speculation and some minute level of research is at the core of these breakouts.

However, when speculation plays such a big role, volatility is close behind. Heavily hyped stocks can fall just as quickly as they rise, and there have been countless examples of this instance over the last year. Needless to say, the “Robinhood crowd” is helping to foster a new era of trading. One that doesn’t solely focus on fundamentals or forward earnings.

But one that also plays into the hype of the stock market. Everything from AMC Entertainment (NYSE: AMC) to little-known biotech stocks like Virpax Pharma Inc. (NASDAQ: VRPX) have benefited from this new trading style.

Regarding the latter, VRPX stock is the latest penny stock darling to experience an explosive move. Monday afternoon, shares were trading below $4.50 & as of mid-morning on Tuesday, the former penny stock broke above $10 a share. Now, if you’re wondering what the VRPX stock forecast is moving forward, your guess is as good as mine. In parabolic instances like this, fundamentals can begin playing a role to justify a stock’s price being so highly valued.

VPRX isn’t the only trending penny stock today. Retail traders are posting images of Robinhood charts that include other big movers on August 17th. In this article, we’ll take a little deeper look to see what could be the catalyst so you can decide if these are penny stocks to buy right now or avoid entirely.

We’ve discussed RLX Technology for the last few days. Thanks to upcoming earnings this week, it has started to trend among retail traders. The company isn’t overly vocal on the newswires but, leading up to their earnings, there are a few things to keep in mind.

The e-Cig/e-Vapor company ran into trouble shortly after it IPOd this year thanks to uncertainty in China. This is both from a stock market regulatory perspective and stricter rules on how e-Cigs are categorized. Regardless of those events earlier this year, RLX stock seems to have found a home between $4 and $5 over the last few weeks. Furthermore, investors may be anxious to see the latest financial results based on what RLX’s CFO, Chao Lu, said in the last earnings update.

“Building on rapid revenue growth and continued efforts in improving operating leverage, our gross margin and non-GAAP net margin have remained steady in the first quarter.”

Considering Q1 results showed strong quarter-over-quarter gross margins and net revenue, it will be interesting to see if RLX could sustain that same pace last quarter. 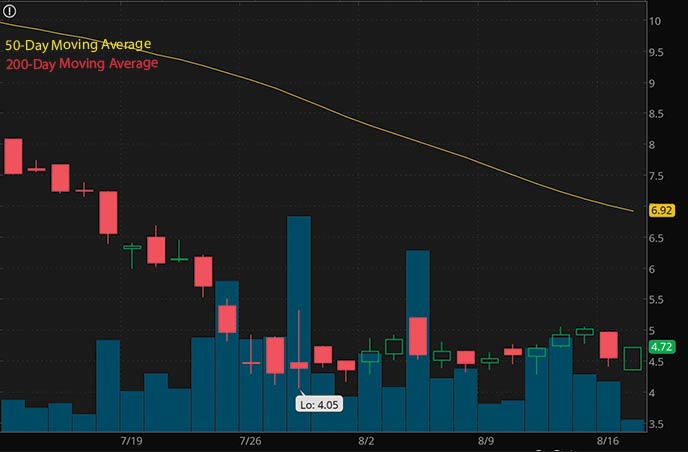 Another one of the trending penny stocks to watch right now is Aerpio Pharmaceuticals. It’s another example of how crazy things can get when speculation plays a role. Take 1 look at the ARPO stock chart, and you’ll see what I mean. Regardless of its volatile swings, it doesn’t negate that shares are up more than 100% year-to-date.

While a biotech pipeline is the core focus for traders right now. It isn’t necessarily based solely on Aerpio’s offering. In fact, earlier this year, the company entered into a merger agreement with Aadi Bioscience. If you read our article, “Best Penny Stocks To Buy Right Now? 5 To Watch Before September,” we discussed broad details of this proposed transaction.

The newly formed company will focus on oncology treatments. In particular, Aadi has developed targeted therapies for different types of cancers. Its lead treatment, FYARROTM, is being studied to treat tumors and suppress tumor growth. There’s a registered trial for this candidate in advanced malignant PEComa. Based on early data, Aadi has plans to submit an Investigational New Drug application for its trial by the end of the year. Aside from that, the next few weeks could also be an important time for the companies. That’s because the merger transaction is expected to close during the third quarter. 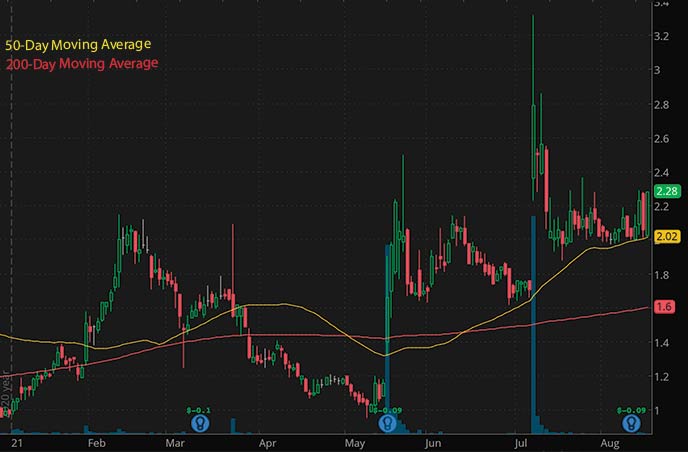 When you talk about trending penny stocks, you can’t leave energy out of the conversation. Tellurian is a unique one in the mix of energy penny stocks. The company provides liquified natural gas on a global scale. One of the important things to consider is how LNG can play a role in the bigger picture of transitioning to the “green energy future” that some countries have in the works. LNG has been seen as a bridge fuel of sorts. Using it in the near term is expected to reduce short-term greenhouse gas by replacing other energy sources like coal or traditional crude.

“No matter how you look at it, gas will be the transition fuel for decades to come as major economies are committed to reach carbon emission targets,” Chris Weafer, chief executive officer of Moscow-based Macro-Advisory Ltd. said to Bloomberg. “The price of gas is more likely to stay elevated over the medium-term and to rise over the longer-term.”

Read More: Hot Penny Stocks On Robinhood To Buy For Under $5

With this, excitement has fueled momentum for LNG companies. Furthermore, after weathering the selling storm following a financing announcement, TELL stock seems to have bounced back a bit. Earlier this month, the company closed a $100.7 million offering that will be used for corporate purposes, including possible acquisitions of upstream assets. In addition, Tellurian has also secured key contracts with Shell NA LNG LLC, Gunvor Singapore Pte Ltd, and Vitol Inc. It also completed the sales for plants one and two of its Driftwood LNG. With an optimistic outlook on this part of the energy industry, new deals in place & fresh capital in hand, TELL stock could be one to watch heading into the rest of the year. 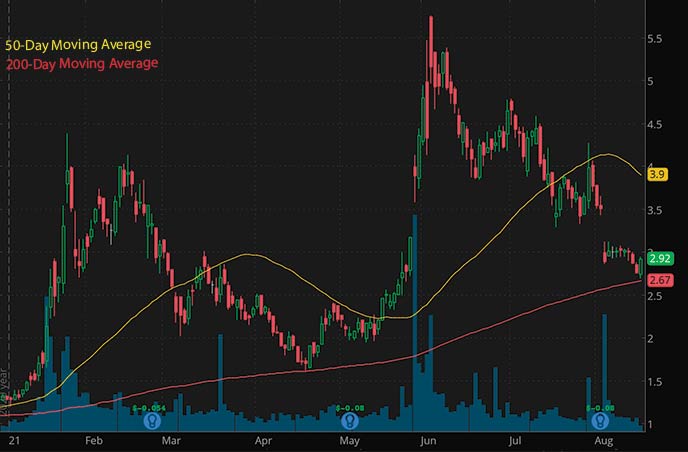 Sticking with the carbon-neutral/green energy trend, Kaixin Auto could also be one of the penny stocks to watch right now. Its humble beginnings had traders focused on a company that was basically an auto dealership network in China. However, recent events may see Kaixin begin to evolve.

Earlier this month, the company announced that it established a new energy vehicle business unit. The focus is on EV R&D, production, and marketing. The move was made in light of the Chinese government’s growing support for rapid growth in electric vehicles in the country. Piggybacking off of this, Kaixin also announced that it would enter China’s smaller size EV market, developing subcompact and mini compact vehicles.

The company also hinted at the idea of speeding up this process through M&A activity. Though nothing has been released yet, Kaixin said it had discussed this with “a number of electric car manufacturers.” Given that as the case, some speculation may be at the center of recent volatility in KXIN stock & something to keep in mind if this is on your list of penny stocks right now. 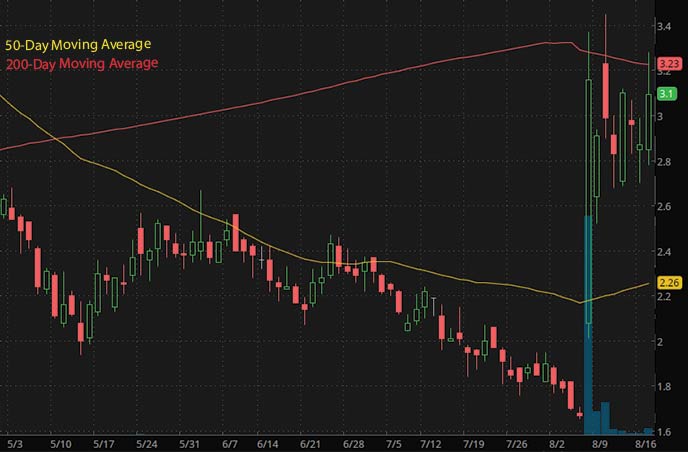 Just like all investments, penny stocks carry plenty of risks. As I’m sure you’ve noticed, none of these have moved up in a straight line, and all came with plenty of volatility. Research is the starting point, whether they’re the most talked-about stocks today or still relatively under the radar. If any of these are on your list of penny stocks to watch right now, make sure you’ve got a full grasp on the pros and cons of each.