Is it Time to Buy Silver?

By: StockNews.com
Silver has performed poorly so far in 2021 with an 11% loss YTD. This is despite many positive catalysts including rising inflation and dovish monetary policy. Taylor Dart explains whether it's time to buy the dip.

It’s been a rough year thus far for investors in the precious metals space and especially disappointing for those believing that inflation would unlock the key to higher prices for gold (GLD) and silver (SLV). Despite multi-year high inflation readings and negative real rates diving deep into negative territory, gold and silver are down year-to-date and have tested their year-to-date lows in Q3. The only good news is that this recent correction has put a massive dent in bullish sentiment and looks like it may have been the capitulation the metals needed to finally shake out the last of the weak hands. This is evidenced by three consecutive low double-digit readings for bullish sentiment last week and a medium-term bullish sentiment reading that’s dipped to new 2-year lows. Let’s take a closer look below:

As shown in the chart above, the medium-term moving average for silver sentiment has slid to its lowest levels since early 2019, currently sitting at a reading of barely 25%. This is a massive sea change from six months ago when market participants were trying to incite a squeeze in silver, and the medium-term moving average soared above 75% bulls, with three bulls for every one bear in the market. With this reading now reversed (three bears for every one bull), sentiment has finally become a tailwind, with further weakness likely to present a buying opportunity. This is because when bearish sentiment dominates a market, there’s few left to sell or short. Based on history, sentiment can always get worse, but for the first time in two years, sentiment for silver has flipped to a contrarian bullish reading.

However, the one issue that does have to be monitored is the silver/gold ratio, which has broken its short-term uptrend and is currently below its weekly moving average. This breakdown is not a huge issue, but it is a minor red flag, given that silver should be massively outperforming gold if we truly are headed into a new secular bull market for the precious metals space. As it stands, the silver/gold ratio is sitting just below its key moving average and has made a higher low vs. its lows made last year. The key to moving this indicator back to a bullish reading is the silver/gold ratio getting back above 0.155, which would suggest that we do have another higher low in place for this indicator. An inability to hold at this level, though, would make further rallies in silver more suspect. So, investors in silver should be keeping a close eye on this, and they will want to see this moving average reclaimed as soon as possible. 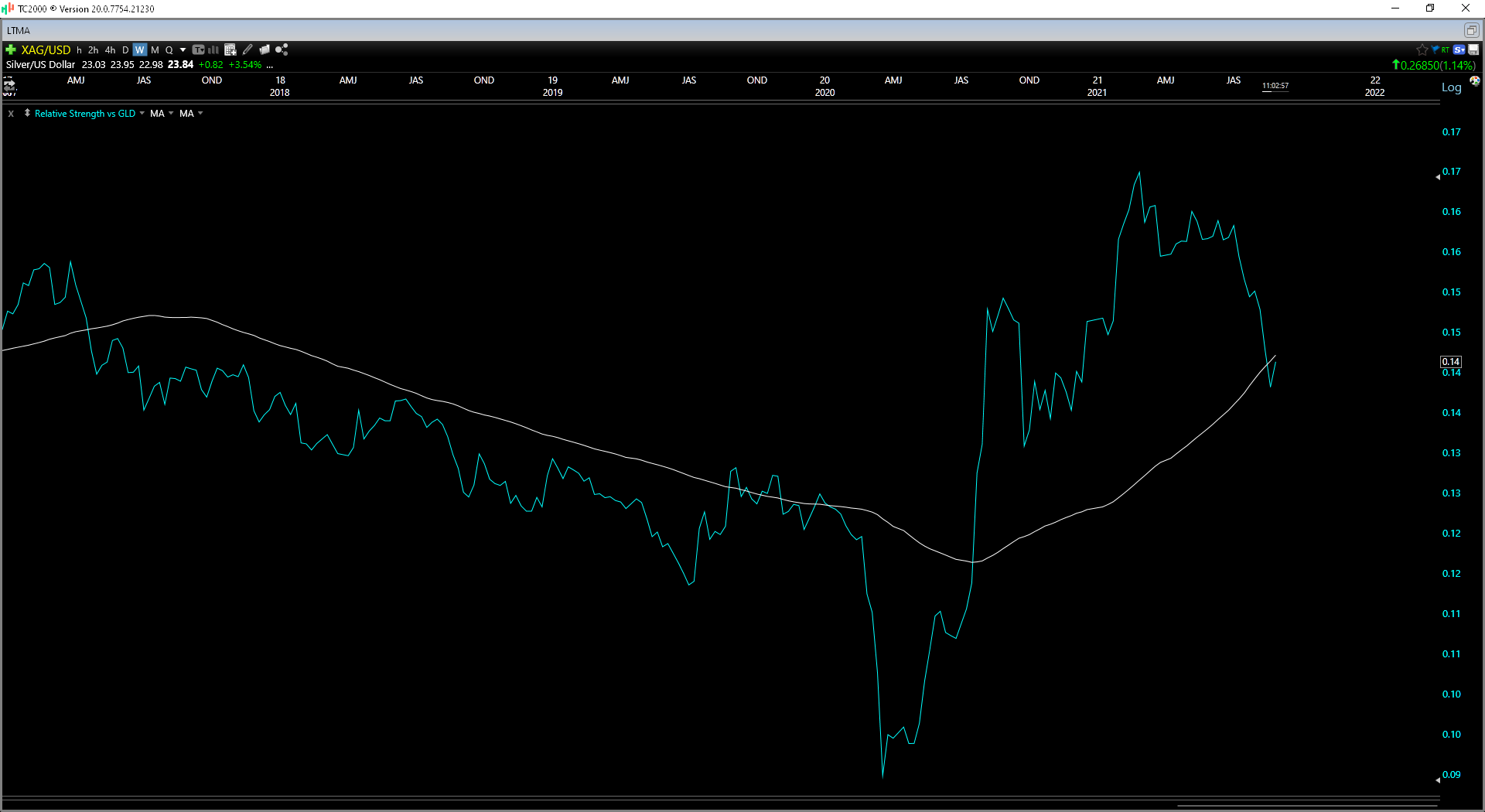 The good news is that if we look at the technical picture, silver has barely flinched on its long-term chart, holding above its multi-year breakout during the recent correction. Notably, the bulls also defended a key monthly moving average (white line). As long as silver remains above $22.00/oz, I see no reason to turn bearish on silver, and I continue to see higher prices ahead long-term. In fact, the extreme pessimism in sentiment is even more encouraging given that silver is still making higher highs and higher lows on a monthly basis and has not entered a bear market. Having said that, the silver/gold ratio is quite important, so while holding $22.00/oz has been the silver lining during this correction, outperformance vs. gold would be ideal to suggest this is just a violent shake-out. 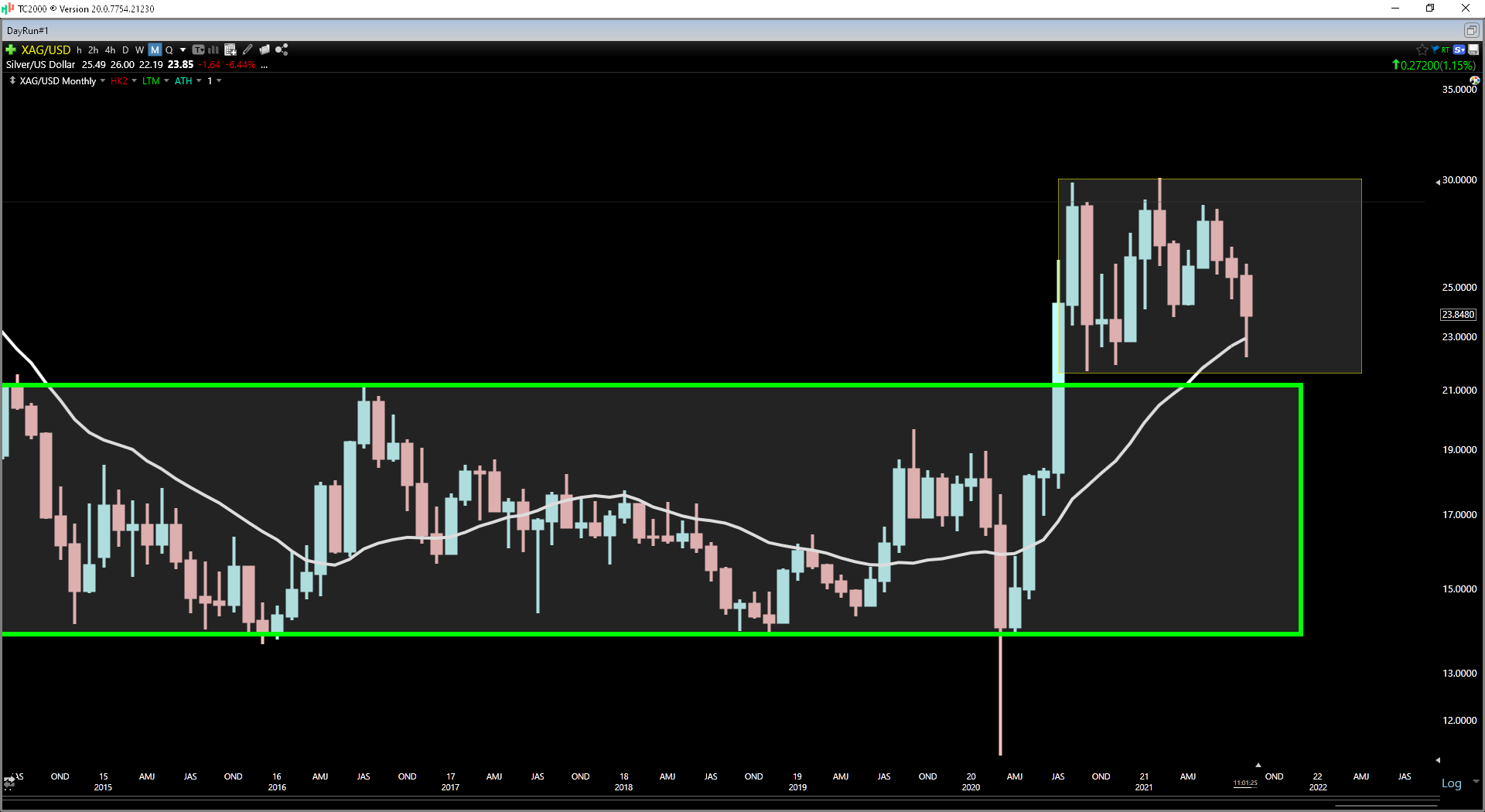 So, what’s the best course of action? 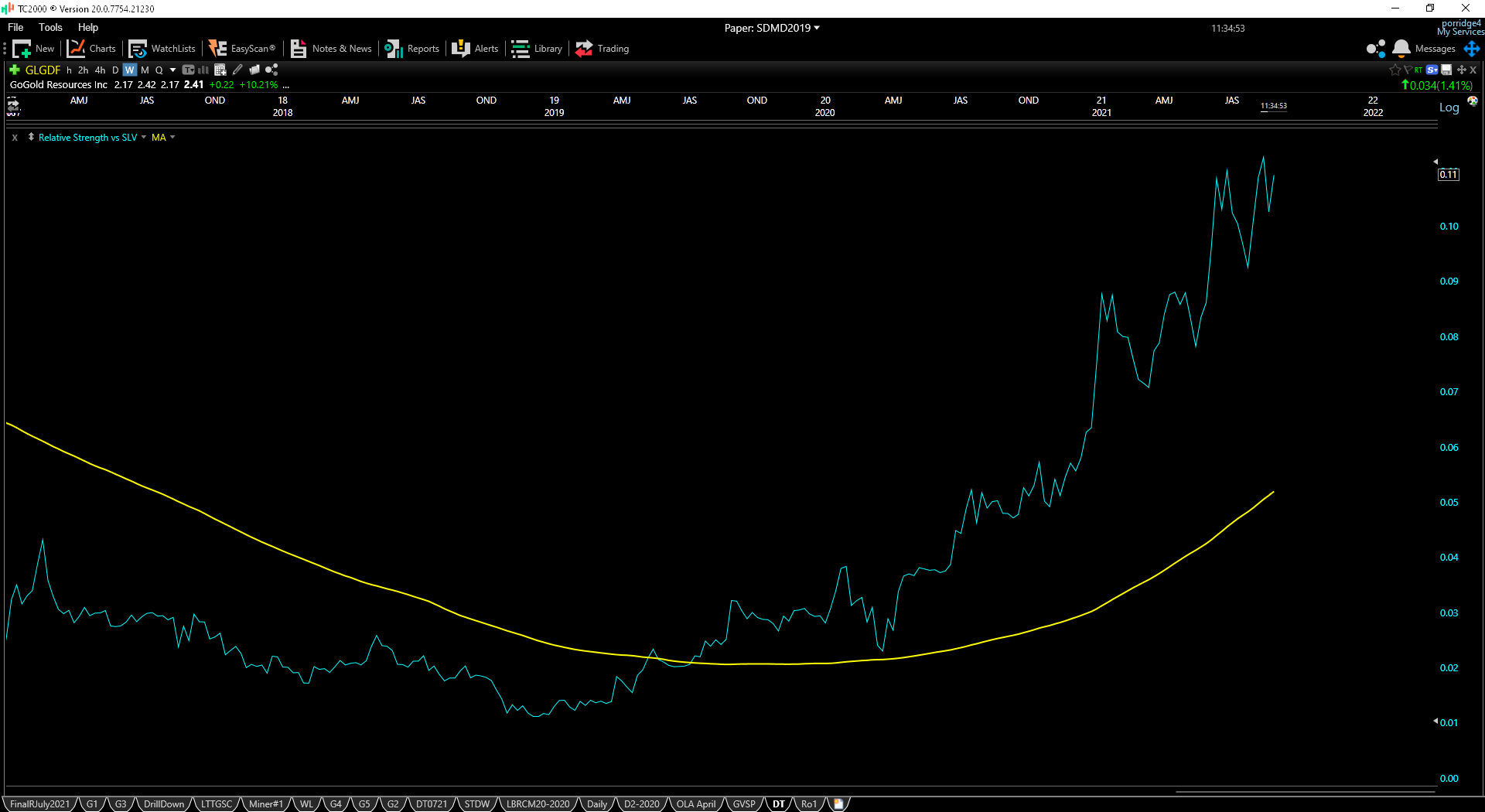 With many silver miners acting better than the metal itself on a technical basis, I continue to see this as the best way to play the market. This is because names like GoGold (GLGDF) have remained above their 125-day moving average during the recent violent correction and have already made new all-time highs, suggesting they do not need higher silver prices to generate alpha. In fact, if we look at GoGold vs. silver, we can see that the stock’s performance relative to silver remains in a strong uptrend, and I always prefer to be long uptrends vs. downtrends. For investors interested in the metal itself, I would view any re-tests of the recent low at $22.25/oz as a low-risk area to start a position. However, with uptrends in the strongest silver miners currently, I recently exited my position in silver to focus on stronger names in the sector. Having said that, if this extreme pessimism plays out like it usually does with strong forward 6-month returns, silver could easily head back above $27.50/oz in the next 6 months.

Disclosure: I am long GLD, GLGDF

The post Is it Time to Buy Silver? appeared first on StockNews.com
Data & News supplied by www.cloudquote.io
Stock quotes supplied by Barchart
Quotes delayed at least 20 minutes.
By accessing this page, you agree to the following
Privacy Policy and Terms and Conditions.