By: Penny Stocks to Buy, Picks, News and Information | PennyStocks.com - Feed
These Penny Stocks Hit It Big In 2021

Penny stocks are well-known for their ability to produce significant gains. But in 2021, the flocks of new traders entering the market helped spark a massive retail resurgence in cheap stocks. What also helped was the rise of the meme stock trend and outlets like Reddit and Twitter acting as breeding grounds for new traders. Thanks to social media, the hedge fund “private lunch table” was now accessible by the retail masses. Now, more than halfway through 2021, the trend continues driving momentum for countless penny stocks.

Sporadic breakouts in the hundreds of percentage points aren’t uncommon with these cheap stocks. However, this year things have become a bit more amplified. Massive short-squeezes, news-driven breakouts, and other retail-spawned catalysts have taken on a bright spotlight. In turn, those “typical” 100% breakouts have started adding multipliers. In today’s article, we’re looking at 5 former penny stocks that have surged in 2021, and we’ll use a hypothetical starting value of $500 to demonstrate just how much of a surge we’re talking about.

First on this list of penny stocks is PDS Biotechnology. It’s the name that has moved up the least in 2021, and that’s saying a lot. Starting at the opening bell on January 4th, shares of PDSB stock were trading at $2.20. As of this week, the former penny stock traded around highs of $15.43. Those of you keeping score, that’s a move of 601% year-to-date, which means that hypothetical $500 would be worth just over $3,000 right now ($3,005).

What Does PDS Biotechnology Do?

The company has experienced a few big breakthroughs this year that’ve helped it reach these heights. PDS specializes in immunotherapy for treating cancer. Its Versamune T-cell activating technology is the backbone of its treatment platform. Right now, the focus is on the company’s PDS0101, which is in a Phase 2 combination trial with Merck’s (NYSE:MRK) Keytruda, targeting head and neck cancer.

Read more: 4 Cheap Penny Stocks To Buy On Robinhood For Under $1 Right Now

PDS will present an update on PDS0101 trials at the upcoming Oppenheimer Fall Healthcare Life Sciences & MedTech Summit at the end of the month. There is also an update planned on the company’s other pipeline products, including PDS0102 and PDS0103, which are in the process of going into human clinical trials. 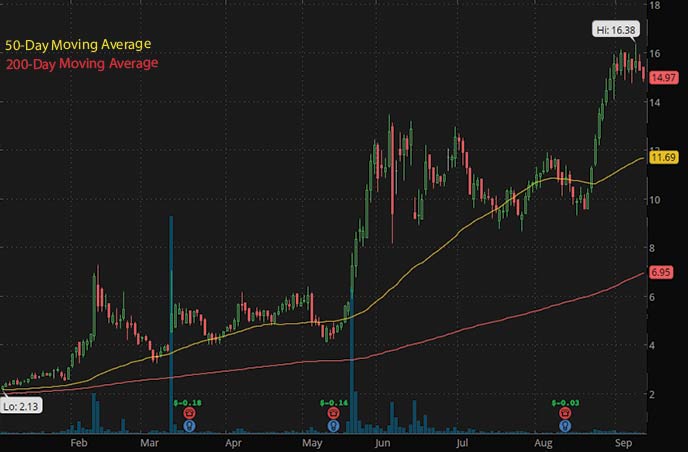 Unless you’ve been living under a rock, you’ve probably heard about Vinco Ventures. The company’s foray into the world of social media raised eyebrows initially. Then heads began to turn thanks to the latest “short squeeze stocks” trend in the market. Despite having pulled back from its 2021 highs, the former penny stock is still up considerable percentage points year-to-date. BBIG stock was trading at $1.38 to start the year and reached $10.57 this week. That 665% move would put that hypothetical $500 at $3,325 right now.

What Does Vinco Ventures Do?

With the rise of platforms like TikTok, competitors have been vying for positions. In Vinco’s case, along with its merger partner, ZASH Global Media, the companies acquired Lomotif Private Ltd. It’s a Singapore-based video-sharing social networking platform becoming a rival to TikTok and Kuaishou. Lomotif has achieved a record number of Monthly Active Users (MAUs) with over 30 million MAUs, according to Data Analysis Firm Sensor Tower. Furthermore, Vinco recently launched recording Artist Tory Lanez’s album “When It’s Dark” on the E-NFT.com platform. “When It’s Dark” is the first album to go platinum on the blockchain with over 1,000,000 units sold. 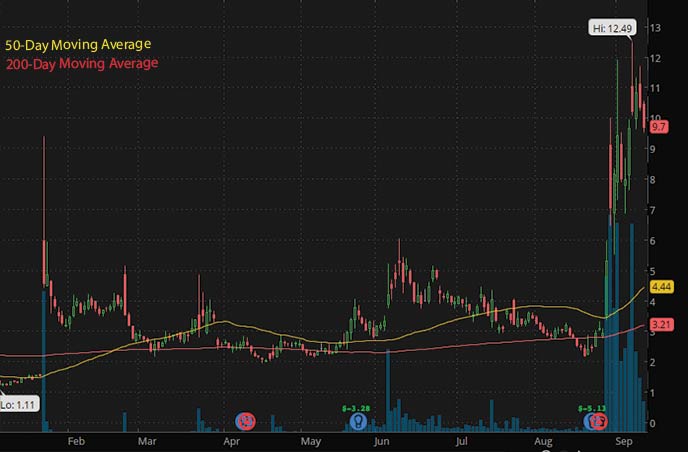 Shares of CPI Card Group have quietly mounted a massive move in the stock market this year. This former penny stock hasn’t traded more than 230,000 shares in a single day. Yet even with that as the case, PMTS stock has managed to climb from $4.43 at the start of January to highs this month of $37.70. Yes, you read that correctly. Even with lighter daily trading volumes, this former penny stock has managed to climb over 730% year-to-date. That means the hypothetical $500 would be sitting at $3,660 right now.

What Does CPI Card Do?

Fintech has been red hot this year. CPI payment technology providing payment solutions for its customers. The company has also experienced some significant growth over the last year. Taking a look at the latest quarterly report, you’ll quickly see this as the case. Year-over-year during the second quarter, net sales increased by over 30% to $93.2 million.

Meanwhile, gross profit jumped 61%, with earnings per share eclipsing previous results coming in at 53 cents a share, up from just 11 cents in the same period a year earlier. Income from operations also grew just a little bit, 218% year-over-year. With this as the backdrop, the significant increase in share price has helped echo the milestone year that CPI has experienced so far. 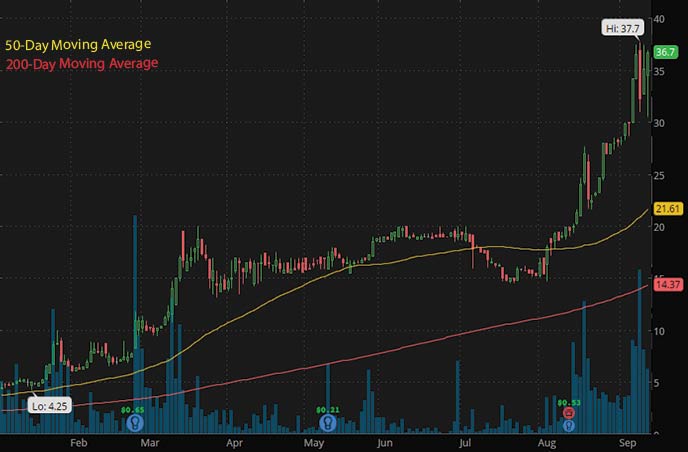 Another one of the bellwethers of the retail trading community this quarter was Support.com. The company saw its shares open for trading on January 4th at $2.25. At one point this year, the former penny stock reached highs of $59.69 in the heat of a massive short squeeze. However, even after pulling back more than 60% from those highs, SPRT stock is still up over 900% year-to-date as of this week’s $22.57 high. That puts the hypothetical $500 at $4,515.

What Does Support.com Do?

Greenbridge’s bitcoin mining and power generation infrastructure. The merger is still pending. However, both parties expect it to become effective and close this week. The new trading symbol will accompany the deal, with SPRT becoming GREE stock on September 15th. 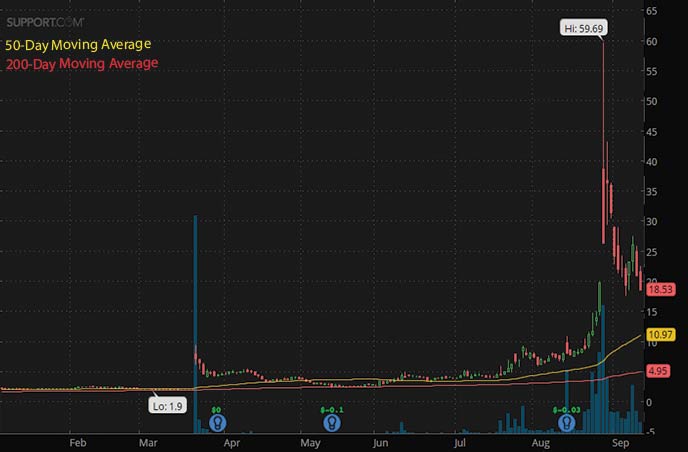 What Does AMC Do?

Sticking with the theme of the article, of course, I’ll tell you what AMC does. Wait, what do they do? Are they just a stock the Apes trade? Are they a movie theatre company? Is GameStop doing a deal with them? There’s speculation abound with the company. At heart, yes, it is a movie theatre company that fell hard on its luck thanks to the pandemic shutdown in 2020. Since then, the retail trading masses have helped breathe new life into the beaten-down company. Now that economies are beginning to reopen, companies like AMC have come back into focus. 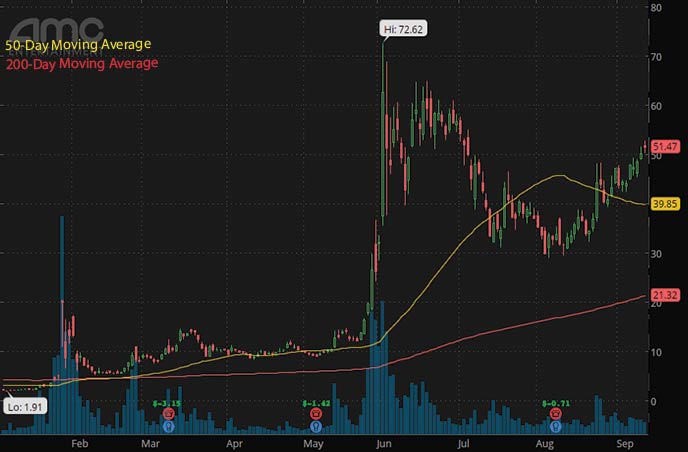 Are Penny Stocks Worth It?

Clearly, these former penny stocks were some of the top performers of 2021. However, it’s important to remember that not all penny stocks experience such rampant breakouts. In fact, many companies end up failing entirely. To score big, it’s important to have a clear understanding of how to trade and manage your risk. Obviously, that goes for any stock, not just penny stocks.

Thanks to the increased volatility, these lower-priced assets have another layer of risk to consider. Hone those trading skills, though, and you’ll be able to make plenty of money with penny stocks. Taking the hypothetical $500 from these 5 former penny stocks would’ve equated to $2,500 at the start of the year. As of this week, that would be sitting around $26,000 based on September 13th highs.