By: StockNews.com
Among the gold mining sector are the explorers, the producers, and the royalty companies, with each offering different risk profiles. The explorers are the highest-risk with regular capital raises and no guarantees that they’ll build a mine; the producers are medium-risk, with risk dependent on diversification and margins; and the royalty companies are the lowest-risk but offer the least reward. The sweet spot in most cases for returns relative to risk are the producers, given that the royalty companies rarely trade at a discount, even if they do offer safety. In this update, we’ll look at Newmont (NEM), Kirkland Lake Gold (KL), and Orla Mining (ORLA), two producers that are best in breed, and one explorer fully financed to graduate to the producer ranks in December.

While the general markets have put up strong year-to-date performances (despite Monday’s sell-off), the precious metals sector has turned in a lifeless performance since January. This has led to the Gold Miners Index (GDX) lagging the S&P-500 (SPY) by more than 4000 basis points this year and over 5000 basis points since Q3 2020.

The significant underperformance is disheartening for investors, but with despondence comes opportunity. A mix of valuations at multi-year lows and sentiment in the gutter typically breeds strong 6-month forward returns for the GDX, and like any market, the best time to buy is when the majority have given up. The fortunate situation with this correction is that even the highest-quality names are trading at their lowest valuations in years, priced as if gold were below $1,500/oz. Let’s take a look at three of the most attractive names below: 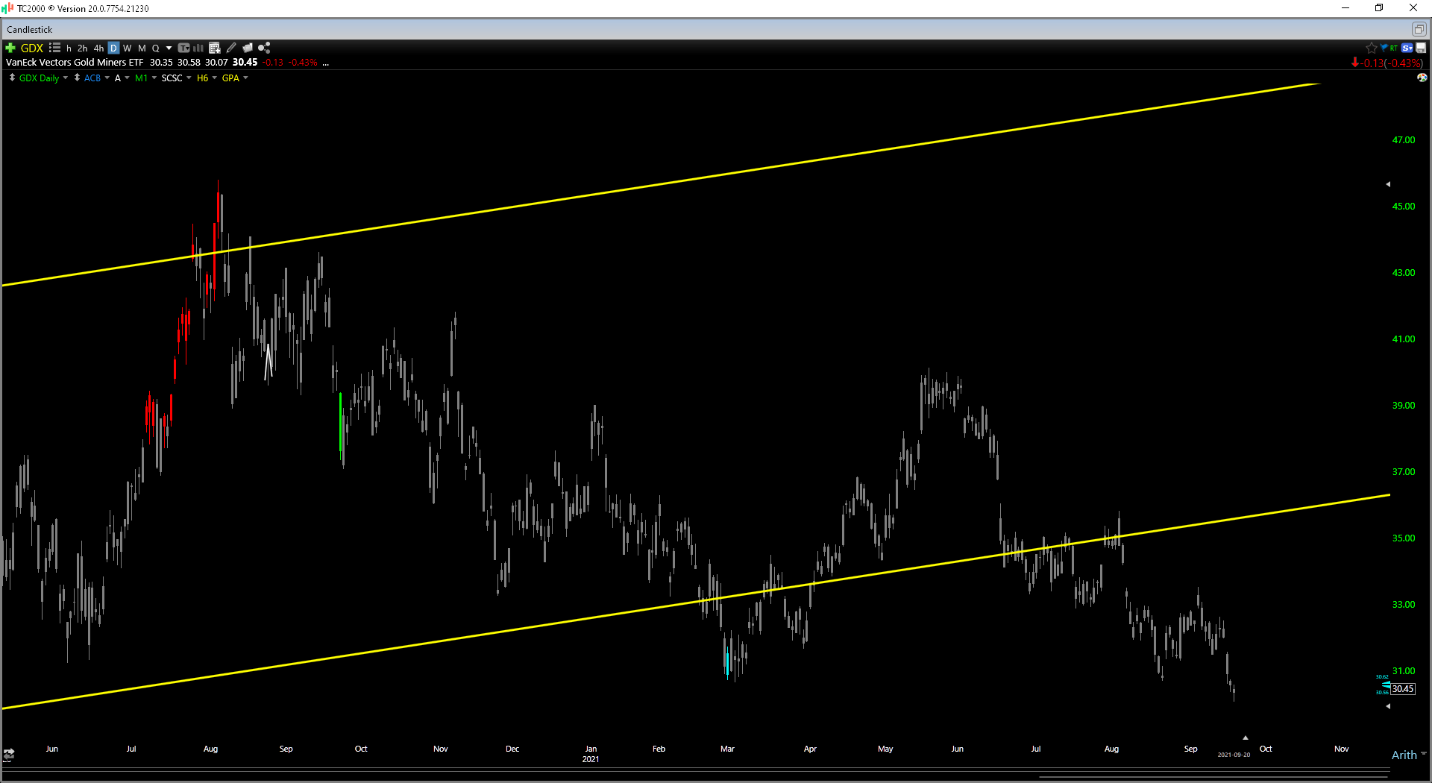 Among the gold mining sector are the explorers, the producers, and the royalty companies, with each offering different risk profiles. The explorers are the highest-risk with regular capital raises and no guarantees that they’ll build a mine; the producers are medium-risk, with risk dependent on diversification and margins; and the royalty companies are the lowest-risk but offer the least reward. The sweet spot in most cases for returns relative to risk are the producers, given that the royalty companies rarely trade at a discount, even if they do offer safety. In this update, we’ll look at Newmont (NEM), Kirkland Lake Gold (KL), and Orla Mining (ORLA), two producers that are best in breed, and one explorer fully financed to graduate to the producer ranks in December.

Beginning with my top idea, Kirkland Lake Gold, the company has had an incredible year, with two material news items. The first major item was the release of an updated mine plan for its Detour Lake Mine in Q2, which highlighted a 20+ year mine life, capable of producing more than 700,000 ounces of gold per annum, with peak production of ~900,000 ounces. Notably, the recently granted permits to increase throughput to 32 million tonnes per annum have taken the governor off the operation, allowing Detour to grow to an 800,000-ounce per annum mine by 2025. This would make it Canada’s largest gold mine and a top-5 gold mine globally from an output standpoint. If we compare the updated figure to less than 550,000 ounces of gold produced from Detour in 2020, this represents significant growth.

However, the updated Life of Mine Plan [LOMP] at Detour has not factored in the newly discovered Saddle Zone, which lies between the Main pit at Detour and the future West Pit. A recent resource estimate shows that this Saddle Zone could add more than 7 million ounces of gold reserves to the mine. This would fill in lower-grade years of the LOMP and also increase mine life at Detour, making this a 30+ year operation.

In a sector where the average mine has a mine life of fewer than ten years, this gives Detour scarcity value. However, the other major takeaway is that it should boost Detour’s average annual production to more than 800,000 ounces per annum at costs below $730/oz, increasing Detour’s NPV (5%). Assuming an updated NPV (5%) of $6.2BB and 259MM shares outstanding by Q1 2022, Detour is now valued at ~$24.00 per share at 1.0x NPV (5%). If we back out another $4.00 per share in net cash on KL’s balance sheet, it is clear that KL is dirt-cheap, with its remaining assets valued at just $13.00 per share or ~$3.3BB. These happen to include two of the lowest-cost and highest-grade gold mines in the world, Macassa, and Fosterville, sporting average grades of over half an ounce per tonne gold. With a combined NPV (5%) closer to $4BB for these two assets, KL trades at less than 1.0x NPV (5%) vs. a historical multiple closer to 1.50x.

If we look at KL from a PE standpoint, the stock looks even more undervalued, trading at barely 10x FY2023 earnings estimates ($4.02). It’s worth noting that if we subtract out estimated year-end net cash of ~$4.00, KL trades at a PE ratio below 10, despite enjoying 55% plus gross margins, based on its all-in sustaining cost profile of $800/oz. While a reduced multiple makes sense given that KL is a cyclical company, a forward PE ratio of 10 is far too cheap, with my belief being that a fair value is 16-18.

Even using the low end of this range, KL’s fair value comes in at $64.32, translating to roughly 60% upside from current levels. In addition to this significant upside, the company also pays out a 1.80% annual dividend yield ($0.75 per share), which I would expect to increase to $1.25 by FY2024, given that this represents a payout ratio of barely 20%. In summary, with a 1.80% annual yield and nearly 60% upside to conservative fair value, investors have the potential for a more than 40% annualized return with KL, based on its dividend and 18-month target price of $64.32. 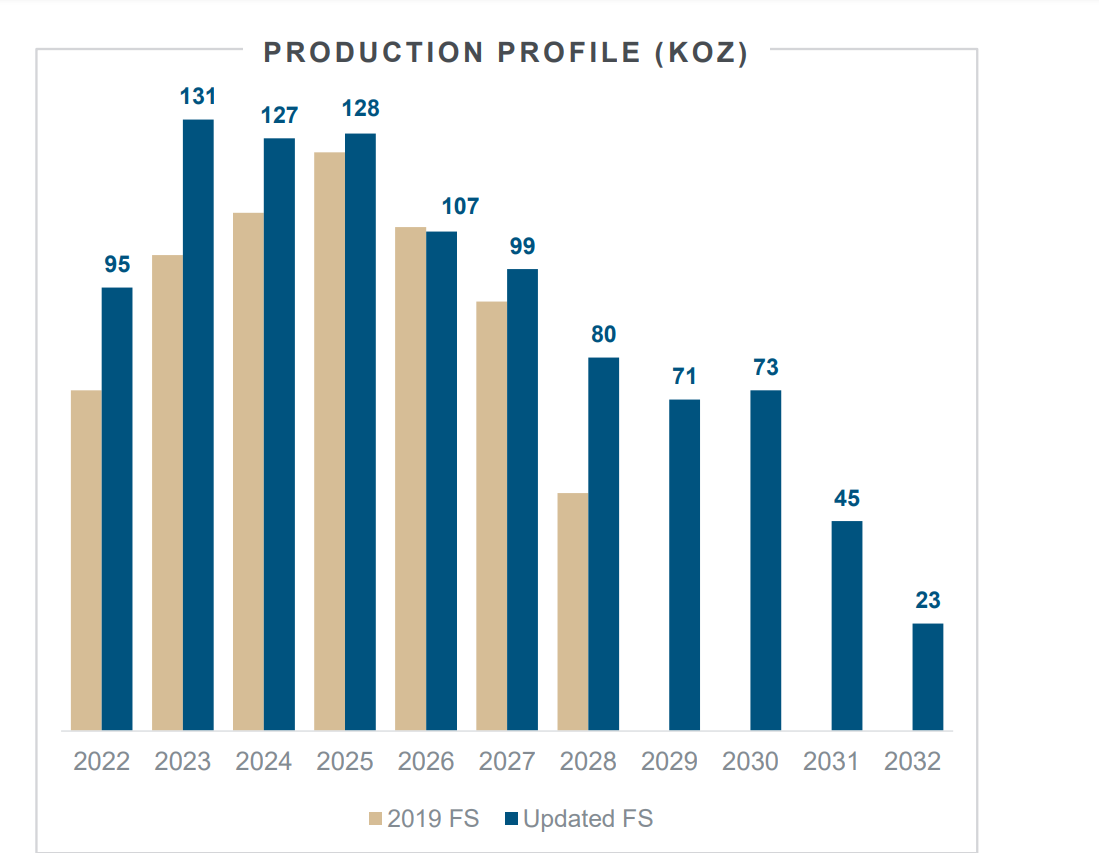 Moving over to the next name on the list, Orla Mining, the company is pre-revenue and currently commands a valuation of ~$900MM at a share price of US$3.65. While this may seem steep for a pre-revenue company, Orla is preparing to begin production at its Mexican Camino Rojo Project in December and is expected to become one of the lowest-cost producers in the sector. This is based on projected costs of less than $600/oz, translating to 65% plus margins at a gold price of $1,750/oz. Notably, the company is already fully funded for construction and should generate upwards of $142MM in revenue in FY2022 and ~$235MM in revenue in FY2023, based on a gold price of just $1,775/oz. In a more bullish gold price scenario ($1,925/oz), Orla Mining’s revenue will come in at $252MM in FY2023, leaving the stock trading at barely 4x forward sales despite industry-leading margins.

It’s worth noting that the company recently completed a Layback Agreement, which has given it access to more than 8 million ounces of sulfide mineralization which is on top of its current ~2 million-ounce oxide resource base. This could add more than 20 years to the mine life or significantly increase production, with these sulfide ounces worth over $600MM at a valuation of just $75.00/oz. So, investors are getting the sulfides at Camino Rojo mostly for free if we assume that Orla’s current valuation is based on its soon-to-be in production mine and its Cerro Quema Oxide Project in Panama. Based on a sum-of-the-part valuation, I see ORLA’s fair value closer to US$5.75 per share, or more than 60% above current levels. It’s also worth noting that as developers graduate to producer status, they typically see a 50% increase in share price or better, with this being a major re-rating catalyst. So, we could see a material re-rating in the stock by year-end, assuming it can begin production on time. As it stands, Orla remains on schedule and should pour its first gold by mid-December

The last name on the list is Newmont Mining, the world’s largest gold producer and one name that’s held up relatively well in this correction. However, while NEM has been more insulated from the sector-wide softness than its peers due to its larger market cap, the stock is still down more than 27% from its highs. This has pushed NEM’s annual dividend yield to more than 4.0%, and this yield is based on a range of 40-60% of attributable free cash flow. With NEM currently paying out a $2.20 annual yield based on the low end of this range (40%), there is room for NEM to increase its dividend to $2.50 within the next year, translating to a ~4.60% yield on cost from a current share price near $55.00. From a value standpoint, NEM has found itself trading at less than 15x FY2023 annual EPS estimates, and those estimates are based on a $1,750/oz gold price.

Some of NEM’s recent weakness in its share price can be attributed to the difficult year it’s had, which is shown below. As we can see, gold production fell from 1.59 million ounces of gold in Q2 2019 to 1.45 million ounces of gold in Q2 2021, with the company’s South American operations impacted by COVID-19 related headwinds. This was exacerbated by a temporary shutdown at the company’s Tanami Mine in Australia, related to a COVID-19 outbreak. The silver lining is that NEM clearly cares about the safety of its workers to shut down massive mines over a few cases, and as vaccination rates increase, these one-time headwinds will not be an issue. However, for FY2021, costs could be in the upper end of the company’s guidance range, given that they will be divided by slightly lower than expected production.

Fortunately, despite the decrease in gold production, gold-equivalent production nearly tripled in the same period, with higher metals prices and increased production from its Penasquito Mine. So, despite the slightly lower gold production, revenue increased to $3.1BB in the quarter.  Meanwhile, quarterly EPS increased to 159% year-over-year to $0.83, with NEM set to see a more than 30% increase in FY2021 annual EPS due to silver & copper price strength. Based on what I believe to be a fair multiple of 21x earnings, NEM’s fair value comes in at $81.06, translating to 45% upside from current prices, in a name with relatively low volatility compared to the sector. This makes the stock a screaming buy below $55.00 for investors looking for a mix of value and yield in their portfolio.

It’s easy to be down on the precious metals sector, but when everyone is losing their head is the time to be aggressive and begin accumulating positions in the best names. I see KL, ORLA, and NEM as three names with material upside and limited downside from current levels, with KL offering the best reward/risk profile. In summary, I remain long all 3, and may add to my positions if we see further weakness in October.

The post 3 Gold Miners to Buy on Dips: Newmont Gold, Kirkland Lake Gold, and Orla Mining appeared first on StockNews.com
Data & News supplied by www.cloudquote.io
Stock quotes supplied by Barchart
Quotes delayed at least 20 minutes.
By accessing this page, you agree to the following
Privacy Policy and Terms and Conditions.