Best Stocks To Buy In October 2021? 3 Cyclical Names To Know

With news of Congress reaching a short-term agreement to extend the deadline on a potential default, cyclical stocks could shine. Evidently, investors appear to be reacting positively to this seeing as the stock market ended in the green yesterday. For the most part, this would buy more time for the U.S. government, preventing a default in late October. Furthermore, while some progress is being made in Congress, things also appear to be looking up on the pandemic front. Namely, former U.S. Commissioner of Food and Drugs sees an end to the pandemic phase of Covid. He believes that this will be the case locally once vaccines are available for children and Merck’s (NYSE: MRK) antiviral pill receives regulatory approval.

Now, what would all this have to do with cyclical stocks might you ask? Well, both factors could add to the ongoing economic recovery in the U.S. As a result, cyclical stocks that follow cycles of the economy would, in theory, thrive as well. For those wondering “what are cyclical stocks”, these are essentially your consumer discretionary stocks and industrial stocks. As mentioned earlier, when the economy is on the rise, so too would demand for these industries’ services and wares.

Overall, the industry remains hard at work as well. On one hand, sports apparel retailer Lululemon (NASDAQ: LULU) recently authorized a $500 million increase to its share repurchase program. This marks a whopping increase of 354% over its previous plans of $141.2 million. On the other hand, FedEx (NYSE: FDX) is now employing robotics to sort small packages at several of its facilities. After considering all of this, you might be keen on cyclical stocks yourself. On that note, here are three in focus in the stock market today.

To begin with, we will be taking a look at the Nucor Corporation. For the uninitiated, Nucor is a leading name in the steel production industry today. In fact, it is the largest steel producer in the U.S. now. The company currently boasts operations spanning the U.S., Canada, and Mexico. Among its core offerings are carbon and alloy steel. The likes of which come in the form of bars, beams, and structural tubing among other core industrial components. Given the importance of Nucor’s wares in a recovering economy, NUE stock could be worth watching now.

Moreover, the company’s shares have been trading lower this month. This would mainly be due to a recent downgrade by analysts over at Goldman Sachs (NYSE: GS). Despite all of this, CNBC’s Jim Cramer sees a buying opportunity amidst the current weakness in NUE stock. According to Cramer, it is a “best of breed stock” that is linked to a “world-class American manufacturer”. To justify this stance, he cites the “tremendous demand for steel” in booming markets like the auto industry. Not to mention, there is the Democrats’ infrastructure bill which could provide a boost for Nucor, should it get passed.

On top of all that, Nucor does not seem to be slowing down anytime on the operational front as well. Earlier this week, the company launched Econiq. Simply put, Econiq is Nucor’s latest line of “net-zero carbon steel” products. This would offer Nucor customers a low greenhouse gas emissions steel option. With increasing pressures to meet sustainability goals globally, this would be a strategic play by Nucor. As such, would you consider NUE stock a top buy now? 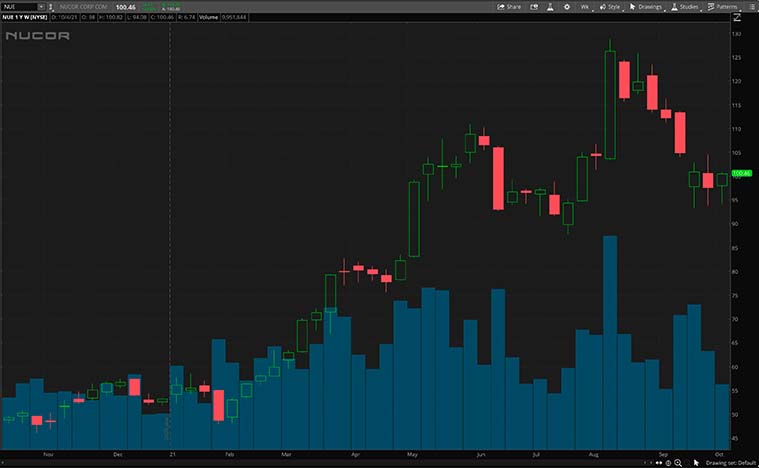 Another name to consider among cyclical stocks now would be Affirm Holdings. In brief, Affirm is a fintech company that specializes in providing Buy-Now-Pay-Later (BNPL) services. Through BNPL, consumers can pay for more expensive items by installments over a longer period. As you can imagine this would incentivize greater sales, benefitting retailers and fintechs alike. After making headlines thanks to its partnerships with Apple (NASDAQ: AAPL) and Amazon (NASDAQ: AMZN) back in August, things could be heating up for AFRM stock again.

Notably, the company is now working with Target (NYSE: TGT). In detail, Target customers now have access to installment loan services for purchases worth over $100. This would mark yet another notable name turning to Affirm for its fintech expertise. Accordingly, this would be due to the surging demand for BNPL solutions among consumers now. Based on a survey conducted by Affirm, more than half of Americans are keen on using “pay-over-time solutions this holiday season.”

Because of the latest news with Target, AFRM stock surged by 19.95% throughout intraday trading yesterday. Even with the company’s shares up by 86% over the past six months, some would argue it still has room to run. Would you say the same? 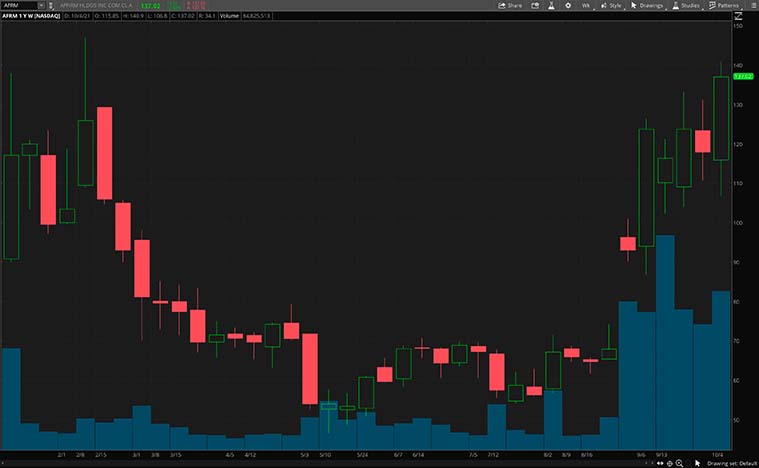 Last but not least, we have Levi Strauss & Company or Levi for short. Most consumers would be familiar with the company’s main offering, denim jeans. If anything, the global apparel retailer would be considered the go-to for people looking for jeans now. For a sense of scale, Levi’s products are now available in over 110 countries globally via a network of 3,000 retail locations and e-commerce operations. Thanks to the company’s latest fiscal quarter report, LEVI stock could be on investors’ radars in the stock market today.

To highlight, Levi posted an earnings per share of $0.48 on revenue of $1.5 billion for the quarter. This would exceed consensus estimates of $0.37 and $1.48 billion respectively. In terms of year-over-year growth, Levi’s total revenue surged by 41%. For the most part, the company cites a 45% year-over-year increase in wholesale revenue as a key growth factor for the quarter. This was fueled by “strong demand” in the U.S. and Europe according to Levi.

All in all, CEO Chip Bergh had this to say, “These results reflect the strength of the Levi’s® brand, improving momentum in our direct-to-consumer business and the scale and agility of our supply chain network where we have executed against macro-headwinds exceptionally well.” Given the current strength in Levi’s operations, could LEVI stock be worth investing in for you? 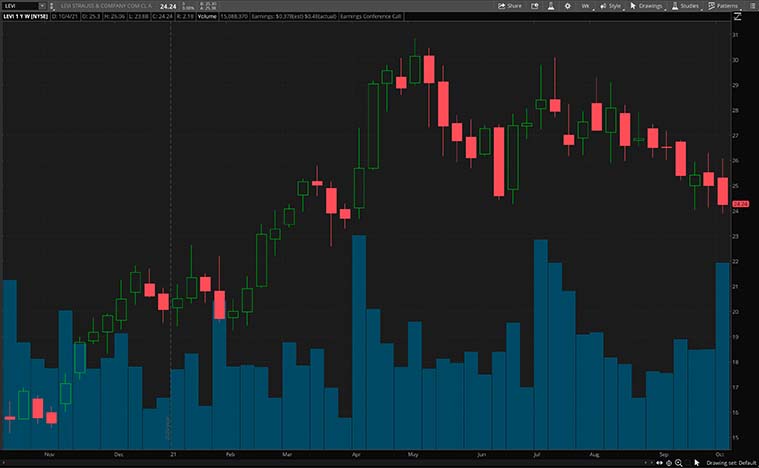