3 Gold Miners To Buy On the Dip

By: StockNews.com
It's been a disappointing year for the gold miners as many were expecting big returns due to the Fed's easy money policies and rising inflation. Taylor Dart explains why investors should now consider buying high-quality miners like Kinross Gold (KGC), Royal Gold (RGLD), and SSR Mining (SSRM).

It’s been a disappointing 12-month stretch for the Gold Miners Index (GDX), with the index plummeting more than 30% from its Q3 2020 highs, with miners combating inflationary pressures with little help from the gold (GLD) price. While this has only led to low to mid-single-digit cost increases for most miners, the combination of no pricing power combined with higher fuel costs and materials costs have put a significant dent in the shares prices of many producers. The good news is that while we have seen a bit of a pinch in margins, all-in sustaining cost margins are still up more than 55% from FY2020 levels, up from ~$450/oz to closer to $700/oz. This means that the average gold producer is still very profitable, and we’re seeing this show up in their free cash flow, with several producers electing to buy back shares, pay dividends but also have room to stockpile cash. In this update, we’ll look at three of the most attractively priced names within the GDX and their ideal buy-points. 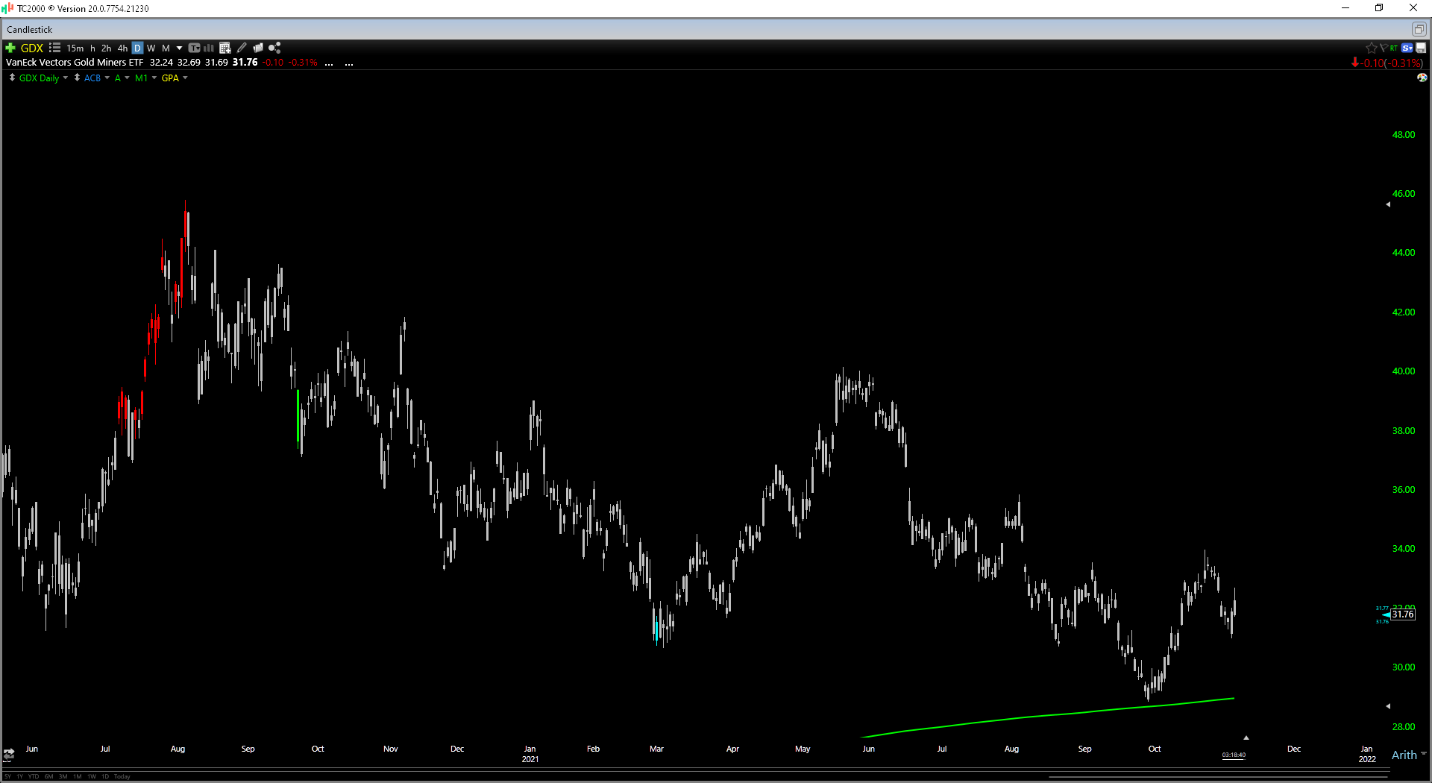 Many investors prefer to play the gold price with the GLD or the Gold Miners Index, and while this approach made a ton of sense in 2011 – 2018 when margins were low, and few miners paid dividends or bought back shares, it makes much less sense now. This is because the average producer million-ounce gold producer is paying a dividend yield of more than 2.70%, double that of the S&P-500 (SPY). So, with investors being paid to wait, holding miners looks to be a better strategy, especially because valuations support meaningful upside in the sector. This is because the average producer is trading at a discount to net asset value, which we have not seen since March 2020, and early 2019. For those unfamiliar, the average gold producer gained more than 40% over the next nine months in both instances, and I would not rule out a similar upside over the next year or a trade back to $40.00 on the GDX. Let’s take a look at three names that are trading at deep discounts to their peers, which include Kinross Gold (KGC), Royal Gold (RGLD), and SSR Mining (SSRM).

Beginning with Kinross Gold, the company has had a terrible year, to say the least, with a mill fire at its Mauritanian Mine (Tasiast) and wall stability issues at its Round Mountain Mine in Nevada. Given the setbacks, the company was forced to revise its guidance to 2.1 million gold-equivalent ounces [GEOs] vs. 2.4 million GEOs previously, sending the stock plummeting below $6.00 per share when combined with the prolonged gold price weakness. This is certainly not ideal, but it’s important to note that the delayed access to high-grade ore at Round Mountain has not changed the project, and the mill is insured against the fire and is expected to restart by year-end. So, while these operational setbacks are certainly disappointing, they have not changed the mine life at these assets, and they have not changed the long-term production profile. This is because KGC is expected to produce more than 2.4 million GEOs next year and more than 2.5 million GEOs per year looking out to 2030. 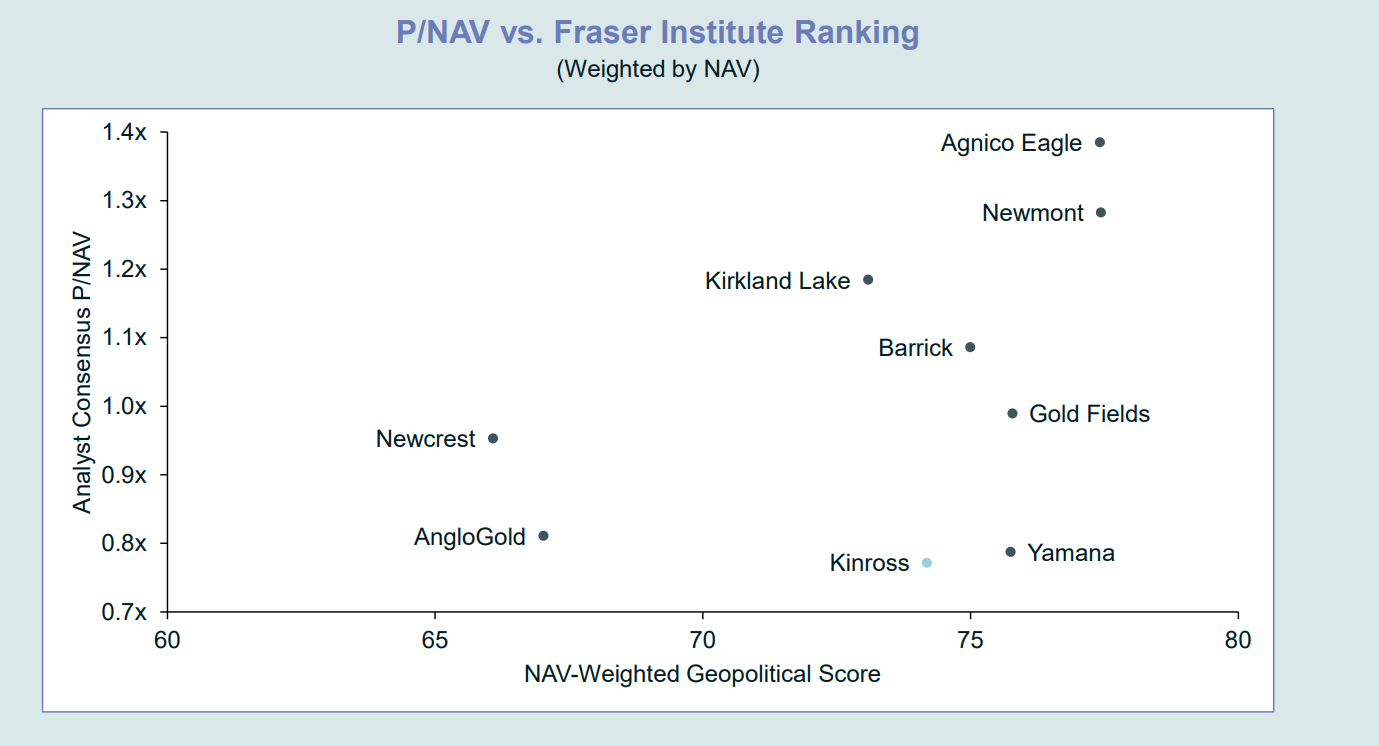 Normally, when it comes to miners with operational issues that are geotechnical or grade reconciliation issues, I stay away until more information is provided, and the Round Mountain issue is certainly not ideal. However, the issue at Tasiast has simply derailed 2021 production estimates and has nothing to do with the ore body. So, while unfortunate, it looks to be creating a potential buying opportunity. This is because Kinross is currently trading at less than 0.8x P/NAV, and the stock has typically delivered 30% plus forward 12-month returns any time that it’s dipped below 0.75x P/NAV, outside of secular bear markets for the gold price. History obviously doesn’t have to repeat itself, but with Kinross still enjoying 35% plus all-in sustaining cost margins and sentiment on the stock being the worst it’s been in years, I believe that a move below $5.50 per share could open up a solid buying opportunity in the stock. So, while I am not long here, I would be watching the $5.45 level closely for a potential bottoming setup if Kinross revisits this level before year-end.

Moving to the next name on the list, Royal Gold, the company has not had a bad year at all. Unfortunately, though, it has been out of favor, given that its primary peer, Franco Nevada Gold (FNV), has offered a much stronger growth profile, and this is where investment dollars seem to have gravitated. This is because FNV has boasted a moderate growth rate on an attributable production basis since 2017 and is benefiting from its energy exposure. RGLD does not have energy exposure and has had much lower growth. However, with RGLD finally turning the corner from a growth standpoint with its massive Khoemacau asset, where it holds a silver stream coming online, we should see meaningful growth in annual EPS over the next year. This is evidenced by the below chart, which shows that RGLD will see more than 15% growth in annual EPS between FY2021 and FY2023 despite similar metals prices. There are certainly better growth stories out there sector-wide, but with RGLD having industry-leading margins, a very low-risk business model due to its royalty/streaming business, and moderate growth on the horizon, the stock is becoming a value play after plunging nearly 40%.

Based on a current share price of $103.00, RGLD trades at just 24x FY2022 earnings estimates, which may appear very expensive for a gold producer. However, royalty/streaming companies have recurring revenue, do not come under pressure during periods of inflation, and enjoy 75% plus margins at current metals prices. Historically, RGLD has traded at more than 38x earnings, and even using a conservative multiple of 32x earnings, I see a fair value for the stock of $133.76, or nearly 30% upside from current levels. If we look at the technical picture, we can see that the reward/risk profile is also favorable, with RGLD nearing a major support level at $103.00 and having the significant upside to its next resistance zone near $130.00. In summary, if RGLD pulls back below $99.00, where it would trade at less than 24x FY2022 earnings estimates, I would view this as a low-risk buying opportunity. 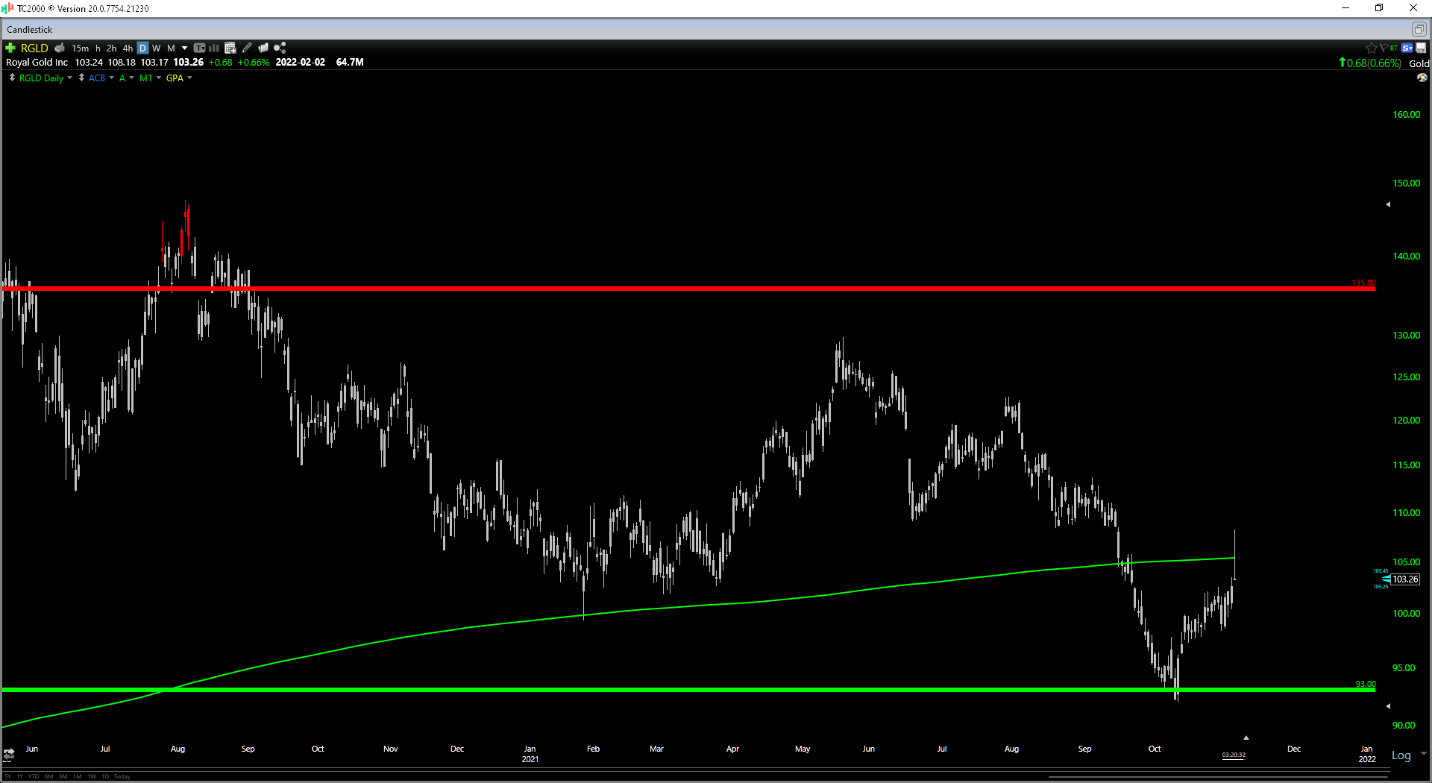 The last name on the list is a producer with four mines, with one mine in Nevada, one in Turkey, one in Argentina, and one in Manitoba, Canada. This company is SSR Mining, an intermediate producer that just posted a blow-out quarter, producing ~186,900 gold-equivalent ounces, and it was one of the few producers that lowered its cost guidance. In a year where we’ve seen inflationary pressures sector-wide, this was a surprise. Overall, the solid performance was driven by a strong quarter from its Turkish asset, Copler, and a very strong quarter from its Puna silver mine in Argentina. However, it was also a great quarter financially. SSR Mining generated more than $100 million in free cash flow and bought back a significant amount of shares, taking advantage of sector-wide weakness. This has reduced the company’s float by approximately 4%  heading into year-end, which should provide a boost to annual earnings per share next year, even if the gold price does languish in the $1,700/oz to $1,900/oz.

Like RGLD, SSRM may not be a growth play, but it is certainly a value play, trading at a share price of $17.00 vs. FY2022 annual EPS estimates of $1.68. This leaves the stock trading at barely 10x earnings, but it’s important to note that the stock is actually sitting at less than 9x earnings if we subtract out more than $2.50 per share in cash. This is a dirt-cheap valuation, especially if SSR Mining continues its share buybacks, which would help to push FY2022 annual EPS above $1.76. Given the company’s impressive cost controls and buybacks which are helping to support the share price, I would view any pullbacks below $15.50 as low-risk buying opportunities.

While none of the miners listed above are in buy zones yet after a strong rally the past two weeks, they are all getting very close, with RGLD being the closest, just 3% away from a low-risk buy zone at $99.00. Obviously, a momentum strategy would suggest chasing high-flying tech stocks like Tesla (TSLA) and Nvidia (NVDA), but while trend following can be useful, it’s less successful when names are already extended. Besides, I prefer to buy when sectors are out of favor, and I cannot remember the last time the mining sector was so hated, outside of 2015 and 2018. Given this backdrop of extreme pessimism and attractive valuations, I would view further weakness in these names below the ideal buy-points as low-risk zones to start positions.

Disclosure: I am long GLD

The post 3 Gold Miners To Buy On the Dip appeared first on StockNews.com
Data & News supplied by www.cloudquote.io
Stock quotes supplied by Barchart
Quotes delayed at least 20 minutes.
By accessing this page, you agree to the following
Privacy Policy and Terms and Conditions.