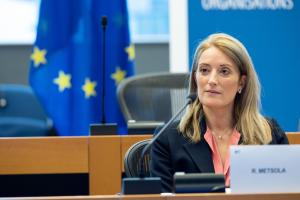 November 15th, MEP Roberta Metsola, Vice President of the European Parliament, held the seminar “Article 17 dialogue on the Conference on the Future of Europe”

Germany requests citizens to resign from a specific religion, in order to participate in the institutions or even as a gardens architect in the city hall”— Ivan Arjona

BRUSSELS, BELGIUM, November 18, 2021 /EINPresswire.com/ -- Last November 15th, MEP Roberta Metsola, Vice President of the European Parliament, held the seminar “Article 17 dialogue on the Conference on the Future of Europe”, which took place in the Parliament and also online.

Representatives of the COMECE, CEC, CROCEU, Humanists, EGALE, Jewish community, Muslims, and others where at the panel. Other movements like the Church of Scientology, were able to take the floor through written questions, videocall and others.

MEP Metsola said at the introductory presentation that: “Why have we organized this seminar? First of all, today's dialogue seminar is about the Conference on the Future of Europe. It's something that has dominated our debates here and we could not let time pass without engaging with all of you, in terms of what your thoughts in this process are. […] So after all the shocks that we have experienced over the past few years our future is something that we have been contemplating a lot recently. Various crises such as the economic and migration crisis, Brexit, and this pandemic as well as more long-term issues such as climate change, have really made us reassess where we are and where we want to be.”

Metsola also stressed that: “Change can be daunting but it is often times necessary circumstances change around us and we need to change along with them so that we can respond to them appropriately or else we realize the error of our ways and correct our behavior when we realize the consequences of our actions… Of course that change can also be a very positive thing not just a necessity, it is an opportunity to make our lives and our surroundings better than they are now and yes, the future is uncertain but it is not completely out of control, it is shaped by its past and our future is shaped by our actions today."

In regards to the seminar, the VicePresident explained that “the aim is to debate how the EU should develop in the future, identify where it is rising to current challenges and strengthen those areas that need reform. One of the most valuable aspects has been its inclusion of an engagement with citizens and in order for change to be successful to go with the team we all need to take ownership of this conference and share a sense of purpose because the EU belongs to all of us Europeans.”

In “this dialogue seminar in which I would like you to be” said Metsola, “as open, even critical, as possible[…] I would really like us to listen to whatever is said very carefully…”.

Another contribution was the one of Ivan Arjona-Pelado, President of the European Office of the Church of Scientology for Public Affairs and Human Rights, which was read by the EP Vice-President Roberta Metsola: "there seems to be no mechanism within the EU institutions to call its own member states to order when state laws and practices discriminate people based on their religion. They discriminate Muslims, Hindus, Scientologists and others. No state should be allowed, as Germany does, to request citizens to resign from a specific religion, in order to participate in the institutions or even as a gardens architect in the city hall.", as it has been reported by The European Times.

-
Scientology is a recognized religion, founded by humanitarian L. Ron Hubbard. Its representative organization in Europe, is registered as a religious organization recognized by the Spain Prime Minister¡s Office Registry of Religious Entities, and is also registered at the official European Union Transparency Registry.

Ivan Arjona
European Office of the Church of Scientology
+32 2 533 28 00
email us here
Visit us on social media:
Facebook
Twitter
LinkedIn