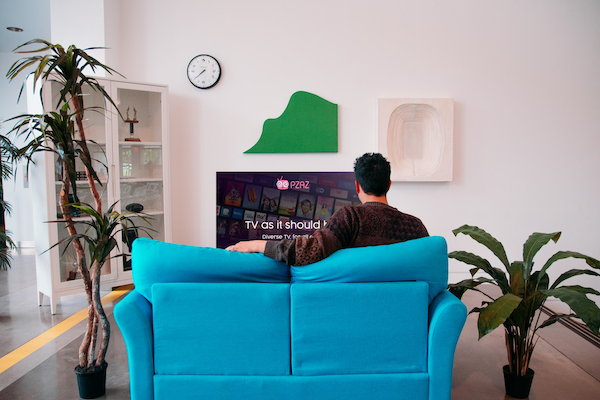 Whilst also including big names such as TRT World, France24 and Axs TV, Pzaz connects audiences with less conventional streaming media that they may not have heard of. Pzaz TV has partnered with more than 260 global independent TV providers and has a growing library of more than 50 thousand films and series, and 360 live channels. From full-length motion pictures, series and short movies, kids’ TV, live TV, lifestyle and music shows to programmes aimed at marginalized audiences such as the LGBTIQ+ community and entertainment in different languages, Pzaz TV offers content for anyone and everyone.

Also known as pick-and-pay, à la carte television allows audiences to subscribe to individual TV channels as opposed to the predominant bundling model where TV is accessible on a hardline pricing form. This way, viewers can cherry pick what they want to watch, allowing them to pay less than they do for cable and satellite TV, and have more flexibility when it comes to entertainment options. And to top it all off, Pzaz TV includes more than a few free TV channels and movies for no-cost entertainment.

“Many people that still use TV bundle packages tend to watch not more than one or two shows or series on a continuous basis. They usually subscribe and pay for a whole TV programme package and never change the channel, which is a waste of money on their side. TV à la carte is here to stay and it is rapidly gaining traction as audiences worldwide realize that they now have way more flexibility in maneuvering their entertainment choices.” – Vincent Weberink, CEO and Founder of Pzaz TV

Pzaz is the A to Z of independent special interest television with a unique mix of content from independent providers. As of October 2022, the Pzaz offering includes 58,000 films, series, and shorts to over 1 million users. The company has 50+ employees distributed across 23 countries, creating a genetic makeup ideally suited to its mission: "We promise to deliver cross-cultural and all-inclusive TV to viewers and audiences globally, supporting an open-minded, respectful world". Pzaz is expanding rapidly and is ambitious about becoming the world's most loved TV matchmaking platform that speaks all languages.