By: ESPN The Magazine via Business Wire News Releases 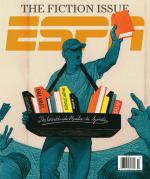 ESPN The Magazine merges sports and fiction in its new issue, on newsstands Friday, February 25. With traditional short fiction pieces produced in collaboration with the acclaimed publishing house McSweeney’s, the features explore alternate realities, myths and rumors that are hard to separate from truth. “The Fiction Issue” is the first full issue of a major sports magazine dedicated to literary fiction, and includes contributions from:

Angel Wings
Tenerife had heard “Three’s a gang” since he was 12. But don’t ever go four. Never. He should’ve listened. By Susan Straight

Bleacher Couch Man
Cole Griffith is either a noble warrior or a middle-aged hoopster who doesn’t know when to quit. By Jess Walter

Moto
The world wasn’t right unless the Knockwoods were winning, A bike race changed everything. By Wells Tower

The Favorite
Garner is broke, unemployed, single, good to his mom and afraid of nothing but himself. By John Brandon

Tunnel Vision
A funny thing happened on the way to a Saints-Panthers game. By Michael Bible

John Brisker’s Greatest Game
The ABA hothead was as feared as he was cheered. Then he vanished. By Gare Joyce