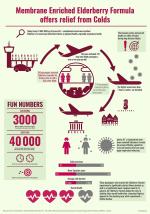 LANA, ITALY--(Marketwired - July 27, 2015) - Results of a large, human clinical trial reveal that a proprietary elderberry formula can provide protection to air travellers from colds as well as stabilize overall health during long-haul flights.

A standardized membrane enriched elderberry formula made from the Haschberg variety and produced by Italian company Iprona AG using a unique proprietary process, was the focus of a two year randomized, double-blind, placebo-controlled clinical trial. The study involved 312 economy class passengers traveling from Australia to an overseas destination, and was conducted by Associate Professor Evelin Tiralongo and Dr Shirley Wee of the School of Pharmacy, Griffith University, Australia.

Initial results reveal that the elderberry formula had beneficial effects for respiratory health. The findings were presented at the 21st Annual International Integrative Medicine Conference in Melbourne, Australia. A detailed research paper is due later in the year.

As well as jet lag and fatigue, passengers may experience upper respiratory symptoms as a result of international flights. So the trial's results are a positive step towards developing a product to help keep air travellers healthy. At the conference, the university researchers explained how the information was gathered including recording of cold episodes, cold duration and symptoms before, during and after they travelled.

"We found that most cold episodes occurred in the placebo group, and that this group also had a significantly larger number of cold episode days," Professor Evelin Tiralongo said.

"The symptom score in the placebo group over these days was also significantly higher. This suggests that elderberry significantly reduces the duration and severity of the cold."

"The results indicate some benefit for air travellers, and may be due to the high anthocyanidin and magnesium content of the tested elderberry formula," she concluded.

The Griffith study follows a recent European research trial in which findings suggest that a combination of Echinacea herb, root extract and elderberry can be as effective as the conventional antiviral medicine Tamiflu for the early treatment of influenza. The results of this clinical trial were published online in April in the open access journal, Current Therapeutic Research.

"The first in-vitro study, which was the precursor to the long-haul flight human study, was conducted and published by Dr. Christian Kravitz and his team in Germany at the University of Giessen. Here, in-vitro tests were conducted on the two major flu viruses, Influenza A and B, as well as on four bacteria known to cause upper respiratory infections. Ultimately the researchers found that the elderberry liquid extract was active against human pathogenic bacteria as well as influenza viruses," Jacobs said.

He also explained that Iprona's unique extract production method and the use of the Haschberg elderberry variety in particular are the keys to the potency of this elderberry extract.

"Iprona uses a membrane ultra filtration technology, which is a proprietary technology that no one else uses. Unlike many extracts that use chemicals during the extraction, we use a purely mechanical separation process, which enables the separation of substances according to their different molecular sizes using semi-permeable membranes -- so no chemicals or heat are required.

"In essence, it is an enrichment process, because it increases the effectiveness of the powder product by increasing the concentration of all the desirable nutrients, thereby preserving most of the original food matrix. The product is a holistic compound, rich in a vast array of phytonutrients present in the fresh fruits, hence taking advantage of their synergistic actions," Jacobs concluded.

To find out more about the ancient uses of elderberry, read Anatomy of the Elder, originally written in 1677 by the German physician Dr. Martin Blochwich, and edited into a modern English edition in 2010 by Anthony Jacobs and Fredrik Stipps, published by BerryPharma®. The book is a great reference, including seventeenth-century recipes for a variety of curatives, from the common cold to stomach ailments.

For media, information and a copy of the book, contact: