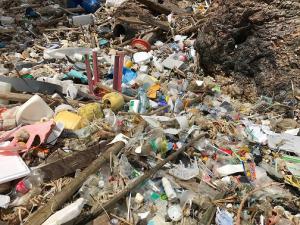 Plastic Buffet - Some of the selections offered from consumerism.

If governments are united in a historic way on a topic, and business entrepreneurship is flourishing, what could possibly throw a spanner in the works? Myopia.ââ Trish HydeHONG KONG, CHINA, May 25, 2019 /EINPresswire.com/ -- Plastic is without borders. Travelling freely, it is literally in almost all parts of the world. It is welcome news, therefore, that governments globally have united to endorse the Basel Convention amendments which are aimed at stopping developed countries from dumping waste plastic on developing countries, or to those with fewer regulations.

PLASTIC BORDER CONTROL
From all reports, the adoption of this amendment is unprecedented. It moved quickly and with passion. There is a wide recognition of the imbalance in power and development that has enabled developed countries to offshore their waste liabilities, mainly by shipping them to Asia. Yes, the United States abstained, but this is because they are one of the few countries which has never been a signatory to the Basel Convention in the first place. Their absence in global engagement on this topic was overwhelmingly countered by support from virtually all other countries in the world.

With this momentum, determination, and shared vision across governments, there seems little doubt that there will be greater transparency on the cross-border movement of plastic waste, with a dramatic reduction in dumping to go along with it. However, time is still critical, for while the amendment was agreed, there is still a detailed process of technical scoping and protocol development to be undertaken. Industry insiders say that this could take in excess of two years.

In the meantime, developing countries are left to deal with businesses that use loopholes, such as mis-coding bills of lading, or making under-the-counter payments to a profiteer. The sooner the issue is truly embedded as a government-to-government environment protection policy through Basel (as opposed to simply leaving it to business) the better.

However, this is not the only consideration for effectiveness.

LEGAL PLASTIC BORDER CROSSINGS
Every day, mass volumes of products and packaging are traded internationally, resulting in plastic (albeit still considered new) being transported across borders for consumption. The Basel Convention is not designed to manage this initial part of the âplastic distributionâ to nations.

Even a successfully implemented Basel amendment will not address the movement of goods and packaging made from plastic before they become waste in the countries where they are consumed. Unfortunately today, the majority of the countries which import these products do not have the local capacities or economies of scale to recover the inherent plastic âassetsâ. Without the ability to transform used plastic for a second-life, and if it cannot be traded for its recovery value, then each country will have stranded plastic assets that will likely become waste.

For example, bottled water is widely available in Asia, for the simple reason that tourists, generally have difficulty stomaching local water. The region imports a wide variety of plastic bottle brands from afar, with few considering the second-life market of 100% of that waste resource.

Counter-intuitively, the very restrictions that will protect developing nations from plastic waste dumping, may lead to consumed plastic being stranded in those countries.

Plastic will continue to cross borders in the form of products and packaging, and therefore in addition to the Basel Convention amendments, now is the time to consider regional collaborations and industry-led purpose-specific circular economies to facilitate the movement of properly processed and regulated waste resources.

This should be done in ways that aggressively engage circular economy thinking and collaboration, instead of from the mindset of fear and roadblocks to the movement of materials as resources.

PLASTIC MYOPIA â A WORD OF CAUTION
If governments are united in a historic way on a topic, and business entrepreneurship is flourishing, what could possibly throw a spanner in the works? Myopia.

The issue of plastic waste dumping started with the European Union and the US (along with other developed nations) believing that exporting their waste plastic was efficient. Yes, it led to cleaner streets and picture-perfect towns at home, but at great cost elsewhere. Had it not been for Chinaâs determined stance - banning the import of plastic waste in 2018 - many in the developed world would have continued to be blind to the consequences of their plastic exports.

The US appears determined to continue the myopia. Despite the US President recently signing a ground-breaking declaration on protecting the Ocean, it seems that only the part of the Ocean that touches the US coastline is of interest. Plastic pollution at sea, travels just like air pollution â without borders.

The EU is much better positioned, but noting their pre-Basel stance, the devil is in the detail, which has yet to be negotiated. Despite all of the positive declarations, there is still much short-sighted rhetoric. For instance, when EU candidates clamor for local bans to be imposed globally, it is clear that there is still little understanding about the real impacts of such a position on underdeveloped countries.

The single largest myopia facing the world, however, is differentiating between used plastic as a waste, and used plastic as an asset. The former fits well with current activity, in that we are limiting the trade of waste to reduce its environmental harm. Unfortunately, this is linear thinking, with the used plastic remaining in the country in which it is consumed, to be either reused or disposed.

The counter view is that used plastics are always an asset, and only become waste when they are non-recovered. Under this scenario, trade agreements should be negotiated on the exchange of value. In fact, the Basel Convention Amendments propose that if waste plastic is in a condition to be reused, it can be traded.

With growing consumer awareness, popular politics, and every major issue being condensed to a sound bite, myopia prevent us having the conversation that balances the two?

Myopia - whether from ignorance, self-interest or convenience - is the challenge standing between us and global plastic circularity.

NO TIME TO WASTE
While decision-makers fine-tune the Basel amendments, now is the time for businesses to demonstrate their collaborative leadership: casting off the the regional blinkers and urgently working to facilitate circular economies in all corners of the globe.