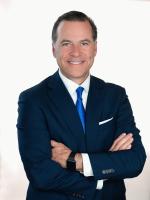 Aqua America (NYSE: WTR) Chairman and CEO Chris Franklin has been named a finalist for the EY Entrepreneur Of The Year® 2019 award in Greater Philadelphia. Widely considered one of the most prestigious business awards in the U.S., the program recognizes entrepreneurs and leaders of high-growth companies who are excelling in areas such as innovation, financial performance and personal commitment to their businesses and communities, while also transforming our world. Franklin was selected as a finalist by a panel of independent judges. Award winners will be announced at a special gala event on June 19, 2019 at the Kimmel Center for the Performing Arts.

“I am honored to be in the running for such a prestigious award among many other deserving nominees,” said Franklin. “This nomination is only possible because of the hard work and dedication of the more than 1,600 Aqua employees across our company. I am fortunate to work alongside devoted and enthusiastic colleagues each day, and this nomination is a true reflection of their commitment to the value they deliver to our customers and shareholders.”

Franklin was nominated for the award by John Colella, managing director at Moelis & Company, who recognized Franklin for leading Aqua's strategy that produced the acquisition of natural gas distributor Peoples in October 2018, which will nearly double the size of the company.

Colella said, “Chris has been a visionary in the utility industry for many years. Since taking over as CEO of Aqua America, he has clearly invigorated the company and culture with a renewed sense of entrepreneurship. This approach led to a transformational acquisition, which has been lauded in the utility marketplace and has positioned the company for even greater future success. Aqua is a better company today as a result of this bold, entrepreneurial move, and its customers, shareholders and communities will also be better for it.”

Now in its 33rd year, EY’s Entrepreneur Of The Year® program encourages entrepreneurial activity among those with potential and recognizes the contribution of people who inspire others with their vision, leadership and achievement. As the only global awards program of its kind, Entrepreneur Of The Year celebrates those who are building and leading successful, growing and dynamic businesses, recognizing them through regional, national and global awards programs in more than 145 cities and more than 60 countries.

Aqua America is the second-largest publicly traded water utility based in the U.S., and serves more than 3 million people in Pennsylvania, Ohio, North Carolina, Illinois, Texas, New Jersey, Indiana and Virginia. Aqua America is listed on the New York Stock Exchange under the ticker symbol WTR. Visit AquaAmerica.com for more information, or follow Aqua on Facebook at facebook.com/MyAquaAmerica and on Twitter at @MyAquaAmerica.