Best Penny Stocks To Buy After A Pullback? 3 To Watch Right Now

By: Penny Stocks to Buy, Picks, News and Information | PennyStocks.com - Feed
Are These Penny Stocks Set To Bounce With The Market?

As we move further into March, many penny stocks are continuing to climb. But it hasn’t come without some headwinds from the broader markets. While February didn’t close on a high note, March is getting off to an interesting start. Despite what goes on with blue-chip stocks, penny stocks tend to follow their own path. But, this does not mean that they are immune to speculation. Rather, these types of penny stocks can be quite speculative depending on news and industry events. So to understand where they could be headed, let’s take a look at what’s going on right now.

On Thursday, Jerome Powell is set to give a speech as U.S. yields show inflation could be nearing. When Powell gave a speech a few weeks ago, his sentiment helped curb investor fear regarding the market’s future. Powell argued that the economy is strong and that things should continue to get better in the near term. But, with inflation as a concern, there’s been a bit more volatility in the stock market, today included.

More related to biotech, President Biden pledged that all adults in the U.S. should be vaccinated by April of this year. This comes as the government recently gave EUA to Johnson & Johnson for its vaccine candidate. But as the markets attempted to rebound, many small-cap stocks ended up rallying along the way. Here’s a quick list of a few names trending at the beginning of March.

Asensus Surgical Inc. is the biotech penny stock formerly known as Transenterix Inc. On Wednesday, March 3rd, the medical device company received a major announcement from the FDA. The announcement stated that Asensus Surgical had received an additional FDA clearance for its Senhance Surgical System to be used in general surgery. This system allows for multiple uses in the surgical setting. This includes digital laparoscopy, haptic feedback, 3D visualization, and more. As you can see, this system aims to be the cutting edge in robotic-assisted surgeries.

Anthony Fernando, CEO of Asensus, states that “the expansion into general surgery for the Senhance Surgical System is a major milestone for the growth and clinical applicability of our technology. General surgery is, by far, the largest area of manual laparoscopy, which can benefit from the precision and insight of Performance-Guided Surgery. The indication expansion allows Senhance to be used in many high-value, complex reconstructive surgeries such as those used to treat reflux and obesity.”

While robotic surgery may seem like a niche area, companies are fighting for the top spot in this industry. Because certain surgeries can be extremely complex, the need for better and more precise methods is extremely pertinent. Also, using the Senhance System can allow for more cost-effective surgeries and less room for error. All of this presents plenty of benefits to both patients and doctors alike. Upon the announcement of this news, shares of TRXC skyrocketed by over 20% on Wednesday. Whether this bullish run can continue remains to be seen. But in the meantime, TRXC is on this list of penny stocks to watch? 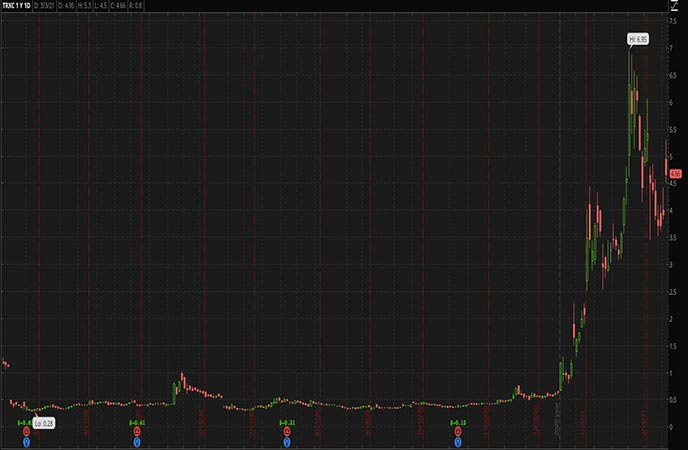 While the markets dipped on Wednesday, shares of some companies like Ambev have gone against the grain. The company is best-known for being the Latin American arm of Anheuser-Busch. During the pandemic, we know that something many across the world drank alcoholic beverages among other things. In this light, it makes sense that ABEV and other alcohol stocks managed to flourish for months.

Though the penny stock dropped during the first few months of the year, it hasn’t totally turned off Wall Street analysts. In fact, most recently, UBS adjusted its price target higher on the stock from $2.09 to $2.28. However, the firm maintains a sell rating. Needless to say, Ambev was coming into the first quarter of 2021 after a strong finish to the year last year. In its latest quarterly results, Ambev recorded a boost in profit thanks to higher sales. The company reported a net income increase of 63% to $1.3 billion. Net revenue in the quarter also rose 20%. The company said it is confident it has built the correct strategy to deal with the challenges it faces in light of difficulties resulting from the pandemic.

As the market focuses on the “reopening” or “epicenter trade,” consumer staples and discretionary goods could be a focus. In light of this, ABEV stock could be one to watch as markets attempt to recover. 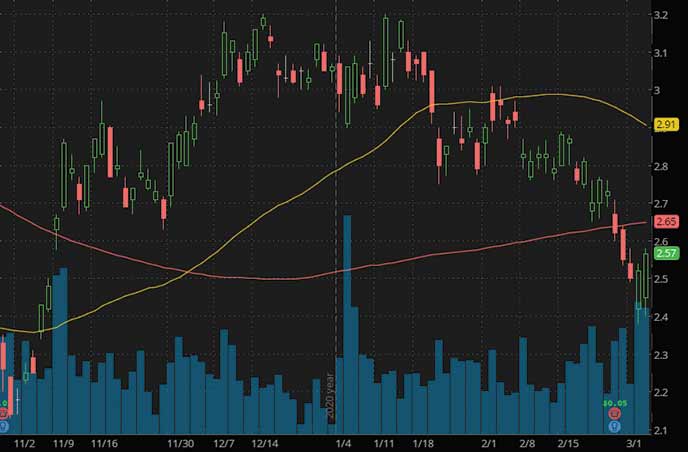 Another medical tech penny stock on the radar right now is Xtant Medical Holdings. In the past few weeks, the volume for XTNT has increased greatly. This is mostly based on two announcements that came out recently. Specifically, the company recently announced its financial report and the closing of a $20 million private placement. Before we get into the details, let’s take a closer look at Xtant. The company fits into the medical tech industry by way of its orthobiologics and spinal impact products. These systems are in use for spinal fusion procedures, among others. In its fourth-quarter results, the company posted $14 million in revenue. Additionally, it decreased its net loss to $0.7 million from $1.6 million in the same quarter of the previous year.

Sean Browne, CEO of Xtant, states that “highlighted by consecutive quarters of positive operating income in the second half of 2020, we are pleased with our progress despite the significant impact Covid-19 had on elective procedures in our largest markets.”

This is something that we’ve seen amongst many biotech companies. Similar biotech companies like Biolase Inc (NASDAQ: BIOL) have worked hard to overcome the drop in elective procedures that Browne speaks to. But, as the pandemic lessens in severity, reports show that these elective surgeries are resuming slowly. With this latest round of capital, Sean Browne explained that it would give the company more resources to advance current initiatives and drive shareholder value. What’s interesting is that this deal occurred through a single healthcare-focused institutional investor. A quick look at a recent filing from OrbiMed Advisors LLC, and you’ll see the firm currently has a 93.6% stake in the company. 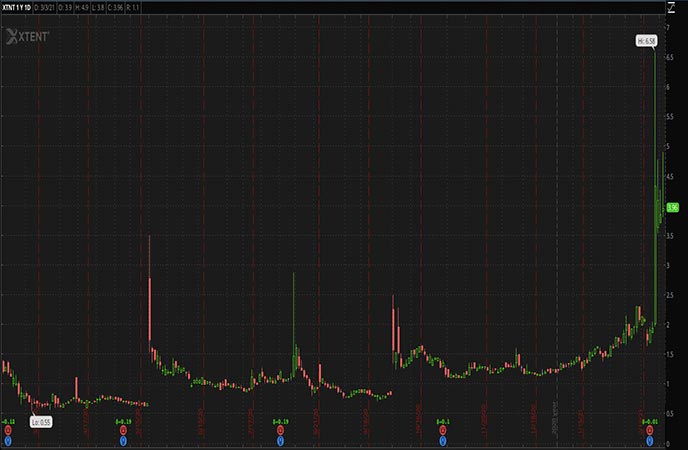