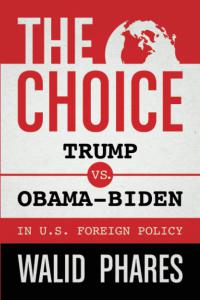 WASHINGTON, DC, UNITED STATES, October 12, 2020 /EINPresswire.com/ -- Members of the American Mideast Coalition for Democracy are raving about Walid Phares’ new book, "The Choice: Trump vs. Obama-Biden I US Foreign Policy."

"Walid Phares has done a great public service in writing this book. Middle East foreign policy shows the most striking difference between President Trump and the alternative future policy of Joe Biden," said AMCD co-chair John Hajjar. "Dr. Phares' book reminds us what a nightmare the Obama-Biden years were for Middle Easterners — ISIS running rampant, failed states right and left, the Muslim Brotherhood on the rise and a vastly strengthened Iran regime menacing its neighbors."

"After all that President Trump has done for the Middle East, he is just getting started in bringing stability and prosperity to the people," added AMCD co-chair Tom Harb. "If America changes course and re-enters the Iran deal, it will result in untold human suffering – possibly even ending with a nuclear Iran which would radically alter the balance of power in favor of our most implacable enemies."

"God bless Walid Phares," continued Sheikh Mohammad Haj Hassan, leader of the Free Shi'a movement. "He continues to tell Americans the truth about the Middle East and that truth is this: if America changes course now, the result will be renewed bloodshed and chaos all over the region – just like existed when Trump first took office. President Trump has done what they said couldn't be done. He's actually brought more peace and stability to the Middle East. Bravo to Dr. Phares for having supported him from the beginning."

"Trump and Phares were right and Obama was wrong on the Middle East, that much is clear," continued AMCD vice-chair Hossein Khorram. "Have Americans forgotten the endless beheading videos? The drownings in cages? The Jordanian pilot who was burned alive on camera? Obama dithered while all that was going on. Not only that, but he actually sent pallets of cash to the mullahs to get our hostages released! President Trump has been getting hostages released from all over the world – paying nothing. Under Obama-Biden, Kayla Mueller was raped and tortured for months and they delayed action, despite having good intelligence on her whereabouts, until she was sadly killed. Do we want to go back to that? I don't think so."

Ibrahim Ahmad el Beja, leader of the East Sudan American Coalition said, "Dr Phares has advised US leaders on the best foreign policy worldwide and in Africa as well. He continuously raised the issues of terrorism and suppression of civil society across North Africa and in particularly in Sudan and its marginalized populations. His new book, "The Choice," is an opportunity for Americans to better understand the two directions they have to select from. Phares has been a national teacher for decades."

Dalia Aqidi, a noted Iraqi American journalist, Senior Fellow at the Center for Security Policy and a former Republican candidate for Congress in Minnesota, praised the book, and the work of Dr Walid Phares: "In such a crucial time, people need to be reminded of how the Obama-Biden foreign policy has weakened the position of the United States, globally. Dr. Phares highlighted the most important decisions that were made by the Obama administration and led to a total chaos and confusion in certain regions such as the Middle East. Foreign policies have a prodigious impact on our national security. This timely book is a must read to understand what made the Trump administration’s approach successful."

"Walid Phares has done a great service. He lays out the case and allows the reader to make up his or her own mind," added AMCD executive director Rebecca Bynum. "The case against going back to the Obama-Biden years is overwhelming. We cannot go back. President Trump has mapped out the only way forward that will result in peace."

AMCD stands for peace in the Middle East. That is why most Mideast Americans have and continue to endorse President Donald J. Trump.